A language movement veteran goes unrecognised even after 66 years 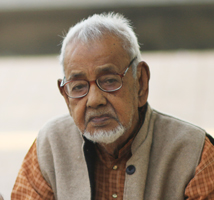 MAGURA, Feb 20: Language veterans are yet to get state recognition even after 66 years of language movement. This is unfortunate told language veteran Khan Ziaul Hoque of Magura.

Ziaul Hoque returned to his own town Magura and organized a meeting protesting police fire on February 21. He along with Nasirul Islam Abu Mian , Chandu Mian and Jalil Khan arranged a meeting at Shegun Bagicha area of Magura town on February 22. When they tried to go towards Chourongi square of Magura town with a procession police charged baton and dispersed the procession. Police arrested Ziaul Hoque and Chandu Mian from the procession.

When contacted Khan Ziaul Hoque told Bangladesh became independent through a liberation war in 1971. The spirit of language movement encouraged the nation to fight for independence in 1971. But language veterans are still ignored.

Expressing regret Khan Ziaul Hoque said, "I have crossed 90 years and I am waiting for death. I have nothing to want as a language veteran during my lifetime, but I desire to be buried with a state honour."