The government fixed on Wednesday the maximum retail price of potato at Tk 30 per kg as the prices of the vegetable shot up to a record high of Tk 50-55 a kg over a period of one week.

The increase in price of the essential item soared despite its abundant stock in the country.

The Department of Agricultural Marketing (DAM) fixed the maximum cold-storage, wholesale and retail prices of potato atTk 23, Tk 25 and Tk 30 a kg respectively after calculating all costs. 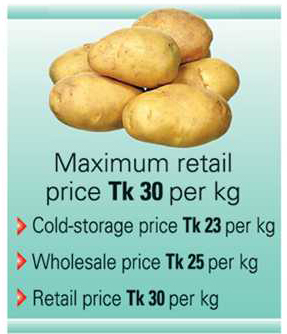 Diamond and cardinal varieties of stored potato were sold at Tk 50 a kg while 'carriage' variety at Tk 55 a kg on Wednesday in the city's kitchen markets and groceries.

The prices of different varieties of potatoes ranged between Tk 40 and Tk45 a kg a week ago.

The current price is almost 100 per cent higher than that of a year ago, according to DAM.

It is the second essential item after rice that the government has fixed prices in a month's time.

In the last week of September last, the government fixed maximum mill-gate prices of finer and medium quality rice. But the fixation had no effect on the market.

A DAM notification said the potato price was maximum Tk 14 a kg when it was stored in February-April period.

But, the produce is being sold at Tk 38-42 a kg at the wholesale level, it said.

The DAM said the country's potato production was 10.9 million tonnes against an annual demand of 7.7 million tonnes. So, there is no shortage.

However, Bangladesh Cold Storage Association (BCSA) president M Mosharraf Hossain said the production might have fallen this year amid untimely rain and the cyclone Amphan that hit the country in November last.

He said the higher cost of vegetables had fueled the demand for potato.

Many traders are not withdrawing their stored potato from the cold storages to make more profits, he said.

He said the association will help the government so that traders, who stored potato in cold- storages, follow the government fixed-rate of potato during their trading.

According to BCSA, production of potato might have been 8.5 million tonnes this year.

Consumers Association of Bangladesh (CAB) secretary Humayun Kabir Bhuiyan felt the need for strict monitoring by the DAM, the DNCRP (Directorate of National Consumers' RightsProtection) and the law-enforcing agencies to implement the government-fixed price of potato.

Meanwhile, a UN agency has blamed the weak market monitoring by the commerce ministry for the price volatility of potato despite having enough stock with the private sector to meet the domestic demand until April next year.

Food and Agriculture Organization (FAO) data showed that with over 11 million tonnes of production, there is a surplus in the domestic market with ample reserves to meet the demand for over nine months.

The second assessment report by the UN agency was launched recently in the wake of a surge in the potato price.

He made a presentation on 'Food Reserves and Trade during the COVID-19 Pandemic in Bangladesh' at the webinar organized by the Press Institute of Bangladesh (PIB) recently.

While domestic supplies of wheat and rice are steady, the public reserves are lower than the 2018-19 levels, Mr Monirul said. The reserves of edible oils are enough to sustain the national demand for two and a half months.

Fresh imports of edible oils will have to be expedited to avert shortages, especially in the likelihood of prices climbing in the short-term due to depleted stocks in the exporting countries.

An adequate amount of pulses has been imported in the last quarter which along with domestic production is adequate to meet the national demand for over eight months.

This second assessment involved more quantitative analysis of data collected between March and June by the FAO, along with the CGIAR organizations and IFAD.

It provides an invaluable and wide-ranging analysis that underlines the scale and scope of COVID-19's impact on food and agriculture in Bangladesh.

Maize yields at over eight tonnes per hectare are among the highest in Asia and the growing demand from the feed industry has catapulted maize to the second biggest cereal crop in Bangladesh after rice.

A quarter of the domestic demand for maize is met through imports which, in turn, are expected to reduce in 2020-21 due to a drop in demand from the feed sector.

Going by the past trends, the estimated reserves in June 2020 are enough to meet the demand for the next 10 months, the report said.

The assessment report showed that exports were performing sluggishly in 2019-20 which fell drastically after the lockdown was imposed in end-March 2020.

Both perishable and non-perishable agricultural exports were affected.

Seeking anonymity, a market analyst said that this kind of price volatility is short-term. There may be several factors like discontinuation of the supply, cross-price elasticity and climatic effect for the rise in commodity prices. There is also scope of policy intervention in this regard.

Lingering of the ongoing high price of vegetables is abnormal and has affected the price of potato as the demand shot up.

The big private hoarders might have been taking advantage of the high price of vegetables and growing demand of potato to gain extra profit.

They might not have released sufficient amount of potato from the cold storage, he added.

Besides, the continuous rainfall has also contributed in the rise of commodity price, he said.

The government usually does not intervene in the kitchen market as they know it is seasonal. But the trend of rising prices should not happen at this point of the year.

It is the duty of the commerce ministry to monitor the market. The government should now start policing by market monitoring and taking action to control the price, he suggested.