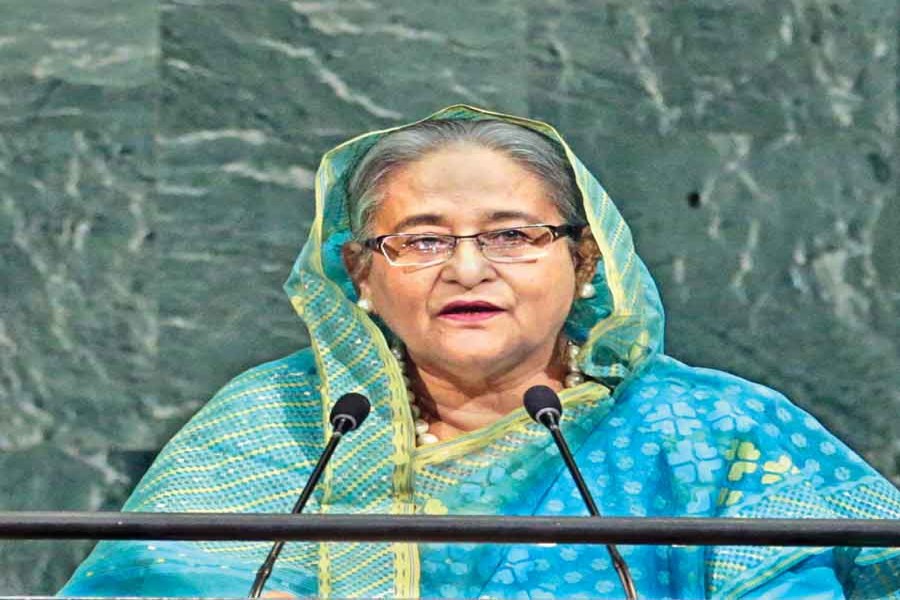 NEW YORK, Sept 22 (UNB): Calling upon the United Nations and the international community to take immediate and effective measures for a permanent solution to the protracted Rohingya crisis, Prime Minister Sheikh Hasina has placed a five-point proposal to the UN in this regard.

"Myanmar must unconditionally stop the violence and the practice of ethnic cleansing in the Rakhine State immediately and forever," she read out the first proposal while delivering her speech at the 72nd session of the UNGA on Thursday. 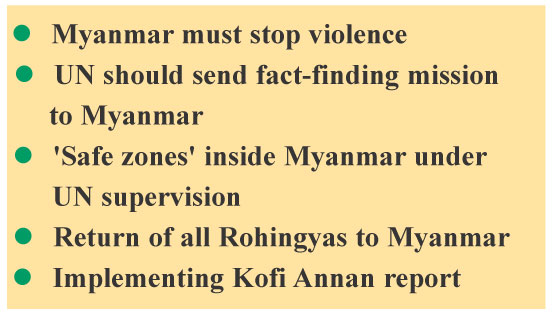 In her second proposal, Sheikh Hasina said the UN Secretary General should immediately send a fact-finding mission to Myanmar.

"All civilians irrespective of religion and ethnicity must be protected in Myanmar. For that 'safe zones' could be created inside Myanmar under UN supervision," she said in her third proposal.

She also called for ensuring sustainable return of all the forcibly-displaced Rohingyas in Bangladesh to their homes in Myanmar.

In her last proposal, the Prime Minister said the recommendations of the Kofi Annan Commission Report must be immediately implemented unconditionally and in its entirety.

At the beginning of her speech, Hasina said this was the 14th time she was addressing the UN General Assembly and this time she had come with a heavy heart.

"I've come here just after seeing the hungry, distressed and hopeless Rohingyas from Myanmar who have taken shelter in Cox's Bazar, Bangladesh. This forcibly-displaced people of Myanmar are fleeing an 'ethnic cleansing' in their own country where they've been living for centuries," she said.

Bangladesh is currently sheltering over 800,000 forcibly-displaced Rohingyas from Myanmar, she added.

"The ongoing atrocities and human rights violations in the Rakhine State of Myanmar once again aggravated the situation at the Bangladesh-Myanmar border. Hundreds of thousands of Rohingyas from the Rakhine State are entering Bangladesh to flee violence," said the Prime Minister.

As estimated by IOM, she said, over 430,000 Rohingyas entered Bangladesh in the last three weeks.

"We're horrified to see that the Myanmar authorities are laying landmines along their stretch of the border to prevent the Ronhingyas from returning to Myanmar. This people must be able to return to their homeland with safety, security and dignity," she told the UN.

The Prime Minister thanked the members of the Security Council and the Secretary General for their proactive attempts to stop atrocities and bring in peace, and stability in Rakhine.

Hasina mentioned that she could feel the pain of Rohingya refugees as she, along with her younger sister, had been refugees for six years after her father, the Father of the Nation Bangabandhu Sheikh Mujibur Rahman, and almost all members of her family were assassinated in 1975.

Hasina said terrorism and violent extremism have become a major threat to peace, stability and development. "Terrorists have no religion, belief or race."

Having been a target of a number of terrorist attacks, Hasina said she personally empathises with the victims of terrorism and feels their need for protection.

Bangladesh denounces the use of religion to justify violent extremism, she said and reiterated her call to stop arms supply to terrorists, end terrorist financing and settle all the international disputes peacefully.

The Prime Minister also urged the UN to address the growing threats emanated from the cyberspace to prevent money laundering, terrorist financing and other transnational organised crimes.

Regarding the migration issue, she said Bangladesh believes in promoting safe, orderly and regular migration.

Last year, Bangladesh proposed developing a sound migration governance framework through the 'Global Compact on Safe, Orderly and Regular Migration', she said, adding that she is pleased that the UN is currently delivering on the formation of the compacts for migration and refugees.

"I would like to say, we don't want war. We want peace. We want people's wellbeing - not destruction of humanity. We want sustainable development. Let this be our collective goal," said the Prime Minister.

Recalling the genocide committed by the Pakistani forces during the Liberation War of Bangladesh, she said the genocide included targeted elimination of individuals on the ground of religion, race and political belief. The intellectuals were killed brutally. "To pay homage to the victims of the genocide, our national parliament has recently declared March 25th 'Genocide Day'."

In Bangladesh, she mentioned, the government has already taken the daunting task of bringing the key perpetrators to justice through the International Crimes Tribunal. "I urge the international community to take collective actions to prevent recurrence of such heinous crimes anywhere anytime. I believe, the recognition of past tragedies like the 1971 genocide would guide us to achieve 'never again'."

In recognition of the potential role of the UN peace-building architecture, Hasina said Bangladesh is looking forward to bold and innovative proposals from the Secretary General on financing for 'sustaining peace'. "I'm pleased to announce a token contribution of US$ 100,000 from Bangladesh for the UN Peace-building Fund (PBF)," she added.