Three teams who won final despite not winning opening match 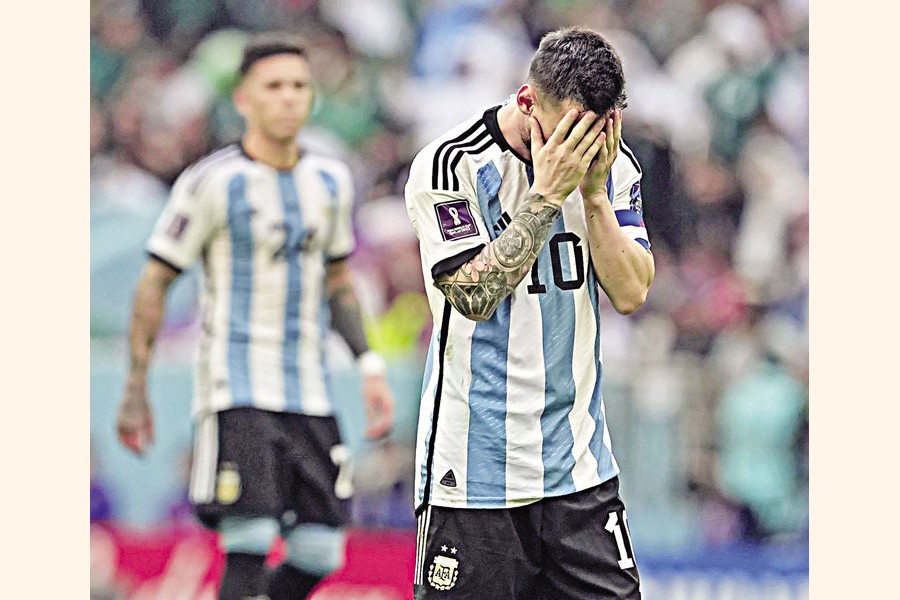 Argentina were left red-faced on Tuesday after suffered a shock defeat against Asian side Saudi Arabia in the FIFA World Cup 2022 group stage opener.
The defeat leaves them in a vulnerable position and will probably have to win their remaining two matches to guarantee progress in the knockout stage. So, with one defeat the tournament favourites now on the brink of catastrophe.
Turning back the pages in a history book, Argentina will have an uphill task as only three nations have ever won the World Cup after losing their opening contest, report agencies.
Let's take a look at who they were:
England in 1966
The one and only time that the English team won the world cup was back in 1966 and ironically enough, they started with a draw against Uruguay. What's more, is that the side led by English legend Sir Bobby Charlton were actually playing at home, as they were in fact the host nation. Indeed, with their win in the finals against then West Germany, the English became just the third nation in history to win the tournament while hosting it. Of course, that honor came courtesy of a Sir Geoff Hurst hat-trick - he scored two in extra time - which stands to this day as the only hat-trick scored in a World Cup final.
Italy in 1982
In the 12th edition of the world's biggest sporting event, there were a lot of firsts. Spain was hosting the tournament for the first time in history.
This was the first time penalty shootout was introduced in a world cup competition. Italy won their 3rd World Cup title by defeating West Germany 3-1 in the final at Santiago Bernabeu. This was the only time a team had won the world cup despite not winning a single group game. Italy were clubbed with Poland, Cameroon and Peru at the group stage.
Azzurri started their campaign with a 0-0 draw versus Poland followed by a 1-1 draw against Peru before ending the group stage with another draw against Cameroon. Italy managed to qualify for the knockouts courtesy of Peru and Cameroon's poor goal difference. But the Italians stepped up after that beating the likes of hosts Spain, Poland and West Germany in the final to claim their 3rd world title.
Spain in 2010
The most recent World Cup winners who failed to win their opening game. This is also the only time in history when a team won the World Cup despite losing their opening game.
Spain had won the Euro 2008 and were tipped to be favourites for 2010 World Cup in South Africa. This was the first time FIFA World Cup was being hosted in South Africa.
Spain were underwhelming favourites against Switzerland in their opening game at FIFA World Cup 2010. But a Swiss goal shocked the world and thus gave us a moment of history as Spain lost 0-1 to Switzerland.
But the Spanish team were unstoppable after this shock defeat as they won precisely against each and every opponent thereon. With a side comprising of Andres Iniesta, Xavi and Carles Puyol, Spain dominated every opponent with their style of play and ended up as FIFA World Cup champions, a title they had never won before.
Andres Iniesta scored the winning goal against the Netherlands in the final to make La Roja world champions.
Can Argentina repeat the same?
Argentina's FIFA World Cup 2022 campaign began on a shocking note. They lost their opening fixture to Saudi Arabia by a 2-1 scoreline after taking an early lead through Lionel Messi. Many experts were of the opinion that the South American nation is a huge favourite to win the tournament that is taking place in Qatar.
Will Argentina get inspiration from 2018 campaign?
This is not the first time that Argentina have got off to a worse start to a World Cup campaign and made it to the knockout stage. In the 2018 World Cup, they headed into the final game of the group stage with just one point to their name. Needing a win in the final group match, they were four minutes away from elimination from the group stage, but Marcos Rojo's winner against Nigeria saw them through to the KO stage.