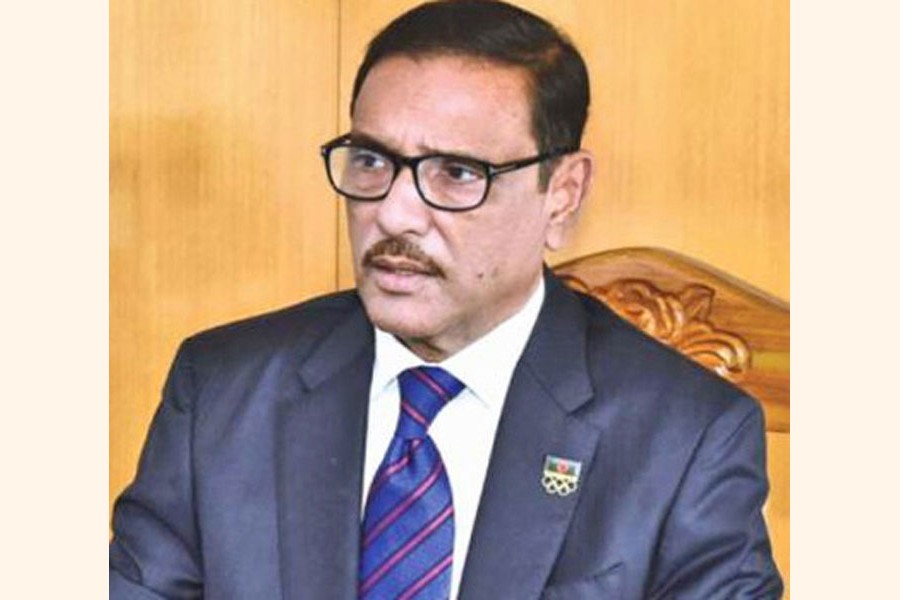 Awami League General Secretary and Road Transport and Bridges Minister Obaidul Quader on Sunday said BNP's daydream of going to power through undemocratic paths has failed, reports BSS.
"BNP cannot see any progress and development works of the government. Prime Minister Sheikh Hasina's backbone is very strong as the people remain with the government," he said.
Quader said this at a regular press conference on contemporary issues at his official residence in the city.
He said Bangabandhu's daughter never bows down to any visible or invisible forces rather BNP is being run by an 'invisible thread'.
About BNP leaders' remarks that an invisible force is running the country and this force is becoming dominant in BNP, he said actually Sheikh Hasina's development-oriented and futuristic politics has put a shadow of darkness on BNP's opportunist politics.
Now the people are taking ahead their respective works fearlessly in a stable environment, he mentioned.
About BNP leaders' allegations that a fearful and evil political situation is prevailing in the country, Quader said BNP's such allegations are baseless as the AL government doesn't impose domination on any political party rather it considers running the government a sacred duty.
Noting that making such imaginary allegations is old habit of BNP, the AL general secretary said BNP should remember their tenure in power before raising allegations against the government.
He said BNP secretary general Mirza Fakhrul Islam Alamgir is spreading hatred against the government.
The minister said not the people rather opportunist politicians and looters of people's property are in fear due to the government's zero tolerance policy against corruption and irregularities and the communal forces who want to create division among the people are also in fear.
The people are not in fear rather they stay well and in comfort, he added.
Suggesting BNP to see their own faces in mirror, Quader said they don't have anything to say to those who gave an institutional shape to corruption by creating 'Hawa Bhaban' during their government's tenure, embezzled and laundered huge money of the people and led luxurious life abroad and now they are also doing so.