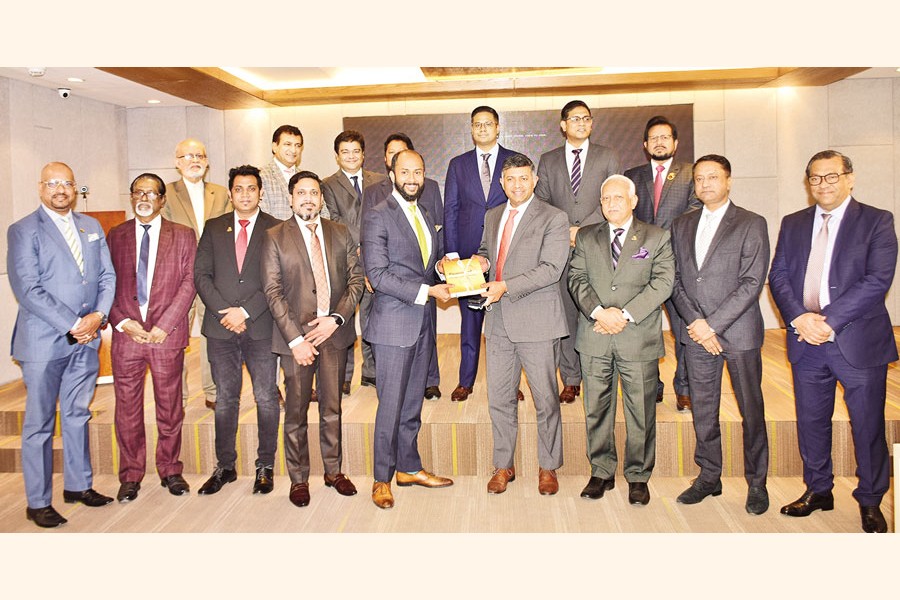 Indian High Commissioner to Bangladesh Vikram Kumar Doraiswami paid a courtesy call on Dhaka Chamber of Commerce and Industry (DCCI) President Rizwan Rahman and discussed bilateral trade issues at the DCCI office in the city on Tuesday, says a statement.
During the discussion, the Indian envoy said Bangladesh can export edible oil to India with 20 per cent value addition to the product.
"We would like to establish a unique mechanism to allow Bangladesh's BSTI certification, especially for the food products as well as other products, including steel, in a reciprocal manner," he said.
He also said the cost of transportation and time between Delhi and Chattogram Port is unendurably high.
Mr Doraiswami urged the business community of both the countries to convince the government to upgrade goods transportation facilities.
He also called for infrastructure development and technological advancement of all the land ports of Bangladesh to expedite faster export and import processes.
There are five railway crossings that are connected between the two sides now, he said, adding that for goods export and import, railway can be the best cost-effective option.
He renewed his call for railway infrastructure and capacity development.
"We're also very keen to expedite the use of Bangladesh's existing river ports for goods transportation, but this needs a few regulatory things to be done, including river dredging," said the Indian envoy.
Regarding Indian investment in Bangladesh, he said: "It would be great if we could jointly work to stimulate more Indian businesses to come to Bangladesh and invest in SEZs [Special Economic Zones] as Bangladesh has huge potentials."
DCCI President Rizwan Rahman said the bilateral trade between Bangladesh and India was US$ 6.9 billion in FY 2019-20 where Bangladesh's export to India was USD 1.10 billion against the import of USD 5.79 billion.
The total FDI stock from India to Bangladesh as of September 2020 was USD 645.54 million, he said.
Since 2017, Bangladeshi jute products have been facing anti-dumping duties ranging between USD 19 and USD 351.72 per ton while exporting to India, he added.
Moreover, India has enacted Customs Rules 2020 which may create problems in claiming preferential duty for Bangladeshi goods in the Indian market under SAFTA and APTA, the DCCI president pointed out.
The cost of transporting goods from Dhaka to Delhi is significantly higher than those from Dhaka to European and US ports, he mentioned.
Rizwan Rahman requested India to expedite the implementation of Indian Line of Credit promised to Bangladesh.
He also called for a review of the Custom Rules 2020 of India pertaining to Rules of Origin and mutual recognition of quality certification given by both the countries.
The DCCI president said the private sector needs to be included in the Joint Economic Commission to address the non-tariff barriers and trade-related disputes.
BIMSTEC and BCIM Economic Corridor facility needs to be tapped for mutual interests of private sector, he added.
He also emphasised upgrade of land port infrastructures of the two countries, transit and connectivity, cross-border railway connectivity and implementation of BBIN Motor Vehicle Agreement.
Bangladesh can export electronic items, iron, steel and cement to northeastern region of India, he said.