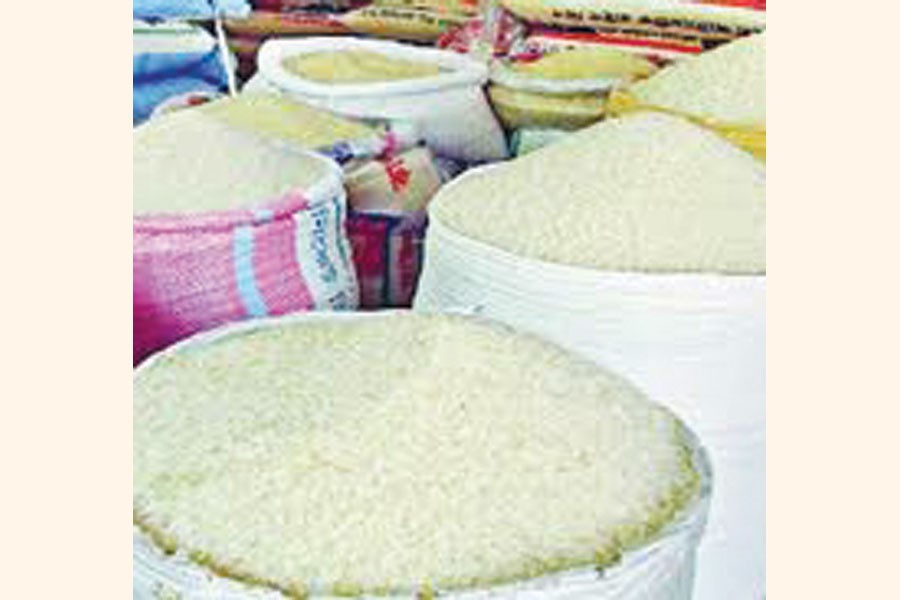 Government monitoring teams have identified increase in transport costs, price hike by rice millers, and massive purchase of paddy from the farmers as possible reasons for a recent surge in rice prices, officials said.
The teams of state-run Directorate of National Consumer Rights Protection (DNCRP) also found that massive buying spree by individuals and organizations for distributing rice among Covid-19 affected poor people was responsible for the recent price hike of the staple.
The prices of most varieties of rice increased by Tk 2-5 per kilogram in both retail and wholesale markets of the capital city recently, the report mentioned.
During monitoring, they (teams) collected the price lists on six types of rice including Najirshail, Miniket, Paijam (fine and course), BRRI dhan-28 and guti.
The monitoring decision came at a meeting of the taskforce on COVID-19 held at the commerce ministry recently with its secretary in the chair.
The DNCRP conducted monitoring over 13 Dhaka city's wholesale and retail markets between June 22 and June 24 last. The monitoring report had been sent to the commerce ministry to take next course of action in this regard.
The entity had suggested that the commerce ministry ask the food ministry to discuss the issue with the millers aiming to keep the key rice market stable and avoid any future volatility in the market, a DNCRP official said.
During the supervision, DNCRP found the causes of the recent rice price spiral through discussions with the retail and wholesale traders in the city markets.
Rice mill owners are collecting paddy largely hoping for future profits pushing up the prices of staple food, according to the state-agency report.
The experts have got astonished at rising trend in the prices of staple food as it was a bumper production of Boro paddy in the country.
High prices of coarse rice have severely affected the lives of lower income group people, they added.
Retailers said the prices of some varieties of rice rose by Tk 1-7 per kg in the wholesale market. The wholesalers of the key item blamed that millers have raised the prices at mill gates.
"Rice is the staple food of Bangladesh. Any sporadic increase in rice prices creates panic. So, the government is always prepared to rein in its unusual price hike in future," a high official of the MoC said.
The country had a record production of 34.065 million tonnes in the fiscal year 2013-14.
The government expects 20.04 million tonnes of rice output from 4.75 million hectares of land this Boro season.
The rice production hit an all-time high at 20.03 million tonnes in the last Boro season when paddy was cultivated on 4.9 million hectares of land, according to Department of Agricultural Extension (DAE).
The government purchased 0.23 million tonnes of paddy and rice in the last two months against its target of 1.95 million tonnes.
Director General of DNCRP Bablu Kumar Saha could not be contacted despite frequent attempts over phone.