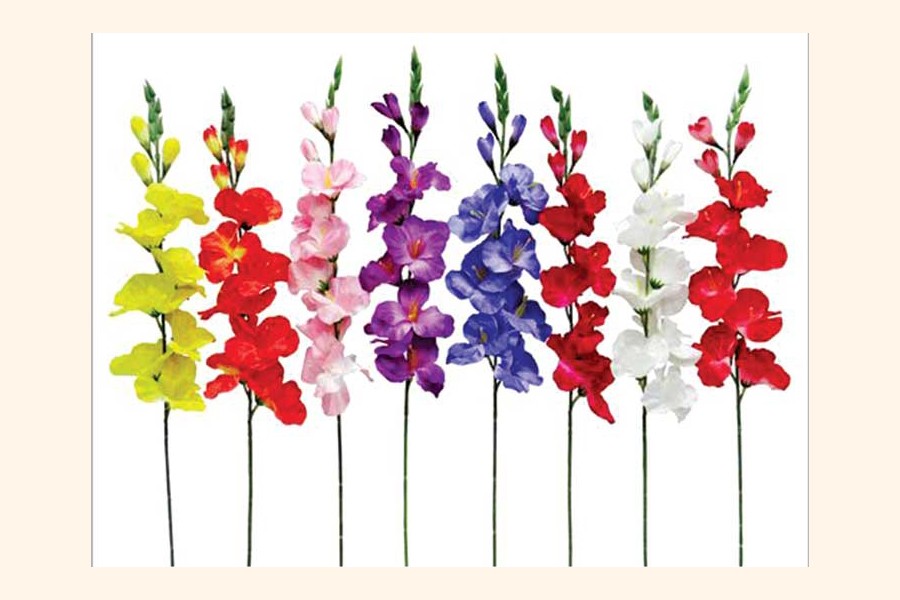 Many people have built their fortunes through flower farming as it's more profitable than many other cash crops in Rajshahi region including its vast Barind tract.
The flower farming has started bringing a new dimension in the process of crop diversification in the region as various government and non-government entities concerned are working to this end, reports bdnews24.com
Zafar Iqbal, 48, son of Ishahaque Ali of Proshadpara village under Paba upazila, has set a bright instance in terms of flower farming in the region.
Around three years back, he started the flowers farming on only ten katha of land and that was the turning of his life.
At present, he in full cooperation of his wife Nusrat Jahan has been cultivating varieties of flowers on more than ten bigha of lands after getting tremendous success in the farming.
Gladiolus sticks of different colours like white, red, yellow, scarlet, pink, violet, rosy, lipstick and blue are grown in the same plot, flower growers said. The flower is harvested within 70 days and grows all the year round said the farmers.
Zafar said the prices of the flowers and plants were satisfactory. The flower fields are not only generating employment and helping people overcome financial hardships but also turning heads and attracting visitors from far and wide.
Only in Godagari upazila of the district, more than twenty farmers have attained unprecedented success in cultivation of flower commercially for the last couple of years in the region as an alternative crop.
They cultivated gladiolus sticks on around 30 decimals of land in Kodomshohar, Bijoynagar, Kadipur and Amanatpur areas.
Under its Second Crop Diversification Project, the Department of Agricultural Extension (DAE) extended requisite training facilities to the farmers along with tubers to encourage flower farming.
Abdul Kayum, a farmer of Kadipur village said he got rid of poverty by farming Gladiolus, Rose and Rajanigondha. Narrating his flower farming and marketing process he said his success largely comes from gladiolus farming.
This year, he cultivated flower on one bigha of land by spending Tk 20,000 and his sale proceeds is expected to be more than Tk 0.15 million (Tk 1.5 lakh).
He added that he will cultivate other kinds of flowers side by side gladiolus on more lands in the coming years. Shafiqul Islam, another flower grower of Bijoynagar, earned profit of Tk 20,000 from five decimals of land.
Although it's a small scale the effort has opened up a new dimension of crop diversification in the dried area and will obviously inspire more farmers to cultivate flowers. He said every conventional crop has risks but flower farming has no risk.
Shafiqul Islam, Upazila Agriculture Officer, said there is a big market for flowers in Rajshahi, Chapainawabgonj and other neighbouring districts.
He said there is a big market for flowers in the country with an increase in the demand for local and foreign flowers.
Due to variation in climate, topography and vegetation, the region has a diversity of ornamental plants which need to be scientifically cultivated to promote export.
Talking to the news agency, he said various species of flowers grow in the region and measures should be taken to cultivate more so that flower can be turned into an export-oriented industry.
Shamsul Haque, Deputy Director of the Department of Agriculture Extension, said flowers are the most beautiful gifts of nature and people of all age love flower so farmers should be encouraged to promote flower farming in the region.