‘Rally must be held at Nayapaltan Dec 10’ 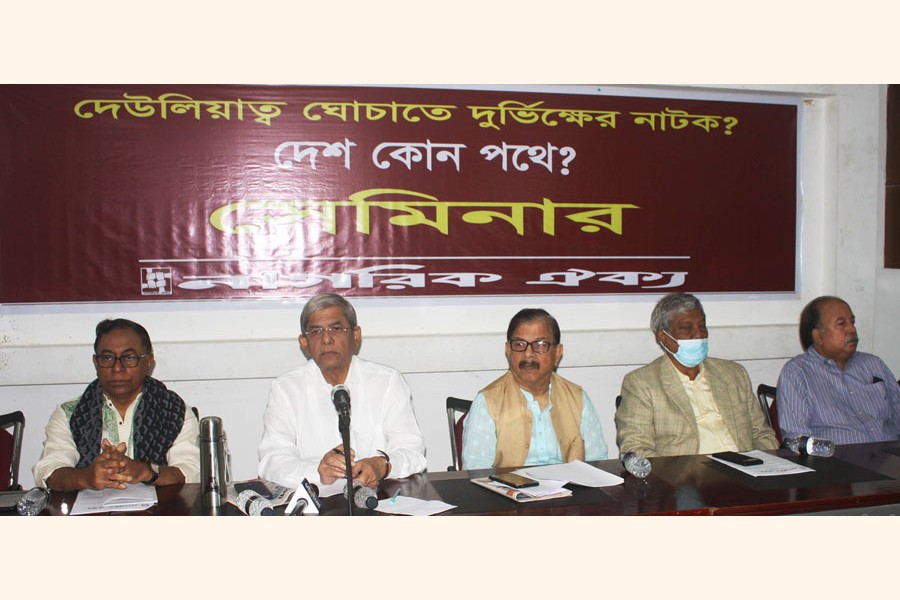 BNP Secretary General Mirza Fakhrul Islam Alamgir on Wednesday alleged that the government has been preparing the scripts of new dramas to divert their pro-democracy movement to a different direction, reports UNB.
"We've seen many incidents, many ups and downs, and repressive acts, loss of lives, enforced disappearances, murders and false and fictitious cases. We're seeing now that they (AL) are talking about arson violence. We've also seen a new drama of snatching militants from the court premises," he said.
Speaking at a discussion, the BNP leader also said the government has been writing the new drama scripts with an 'evil' political motive. "Their main target is to divert the movement that has begun with the core demands of people to a different direction."
Nagorik Oikya arranged the programme at the Jatiya Press Club.
Fakhrul said the government has also started indulging in the old game of filing fictitious cases against BNP leaders and activists as part of its move to suppress the opposition.
He said a case was filed by police against 150 people of BNP for hurling a crude bomb at Karwanbazar, but no one saw taking place such an incident there. "The witnesses also know nothing about it as there was no sound of an explosion."
The BNP leader said already 96 such cases have been filed against 4,500 identified and 10,000 unidentified accused belonging to BNP. "It means their old game has started. They'll carry out the incidents and we'll face the cases and thus we'll remain busy going to the court and they'll get their job done."
He said the ruling party invents new strategies when the election time comes to cling to power in one way or another.
Fakhrul said a strong movement is the only way to get rid of the current situation. "The only way to remove this regime is forging unity of the people and wage a movement for holding a credible and neutral election.
"A new parliament and a new government will be formed through that election and thus a scope will be created to materialise the dreams of the people," he hoped.
The BNP leader said no fair and acceptable election can be held under the Awami League government. "Our political culture has reached a point where elections are not possible under a partisan government. So, the polls must be held under a caretaker government."
He called upon the political parties to get united to ensure the fall of 'usurper' the Awami League regime.
Fakhrul said the police, civil and all other administrations are busy flattering the ruling party. "The worst thing they have done by completely institutionalising corruption. There is no sector in which they have not committed corruption."
He said the MPs distributed the allocated money of the Union Parishads among the ruling party chairmen. "Even, the Awami League leaders and workers get 10-20% share of money from different allowances such as old-age and widow ones. Zila Parishad has been set up and its main job is to plunder public money."
The BNP leader said Awami League has now become a huge burden for the nation. "If we cannot remove this burden from our shoulders, then we will all sink with them. We're about to sink".