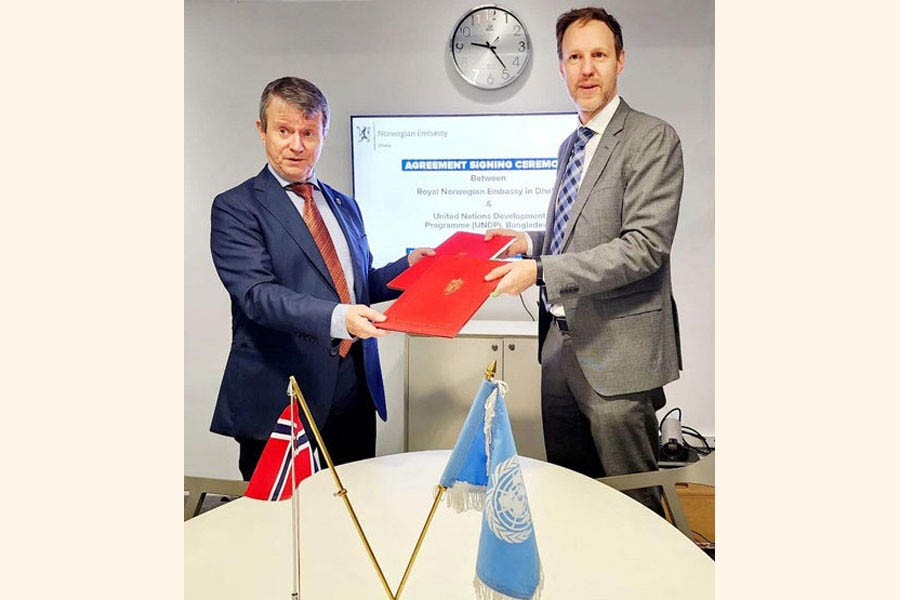 The Royal Norwegian Embassy in Dhaka and the United Nations Development Programme (UNDP) have signed an agreement for a two-year project for landslide risk management in Cox's Bazar.
The agreement was signed by UNDP Bangladesh Resident Representative Stefan Liller and Norwegian Ambassador in Bangladesh Espen Rikter-Svendsen on behalf of their respective organisations, at the latter's office on Wednesday, reports UNB.
UNDP and Norway have a long and successful history of working together, Espen Rikter-Svendsen said at the signing ceremony.
"Our previous pilot initiative to strengthen landslide monitoring and early warning systems in the camps and host communities has helped save a lot of lives," he said, adding that "We want to build further on that through this project."
"With our technical expertise on early warning systems and UNDP's expertise in disaster risk management, I believe this project would be able to effectively reduce the consequences of natural disaster."
"As one of our major contributors, we thank the Norwegian government for being with us as our core partner," UNDP Bangladesh Resident Representative Stefan Liller said at the signing.
"Landslides remain one of the most substantial damaging and recurrent hazards in Cox's Bazar," Stefan Liller said. "In 2019, rainfall-induced landslides affected more than 50,000 refugees with 6,300 temporarily displaced, 10 fatalities and 42 injured."
"It also affects the host community, especially the poor and landless people who settle in the foothill areas. It is estimated that around one million people are currently living with landslide risks in Cox's Bazar District," the UNDP Resident Representative pointed out.
The two-year project will be addressing the risk by enhancing existing landslide warning systems, strengthening disaster management capacities of local government, humanitarian and first responders, and implementing community-led nature-based solutions in the most vulnerable communities.
The embassy's Deputy Head of Mission Silje Fines Wannebo, Senior Advisor Morshed Ahmed and advisor Zohora Farzana Ahmed Bipasha were present at the signing along with UNDP's Deputy Resident Representative Van Nguyen, Assistant Resident Representatives Prasenjit Chakma and Sarder M Asaduzzaman and Head of Communications Md Abdul Quayyum.