Monsoon rain not only reason for devastating floods 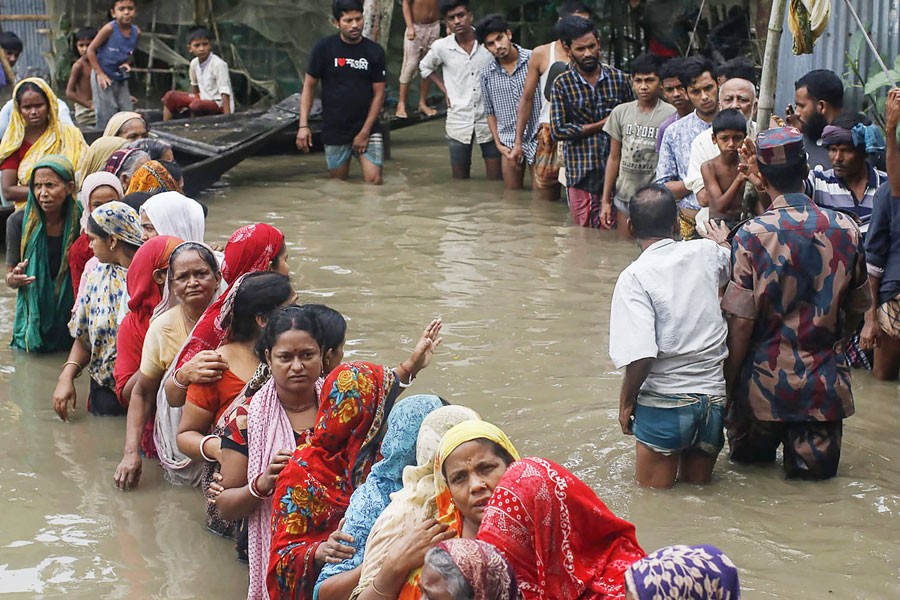 It was but a foregone conclusion that there could be flood onslaughts on the north. And the foreboding became a stark reality. A sudden spell of cataclysmic monsoon flood in Bangladesh's northern and north-eastern parts drowned vast swathes in Sylhet, Sunamganj, Moulvibazar, Netrakona, Kishoreganj, Kurigram and Lalmonirhat districts. However, monsoon is not the lone villain of the piece. There are several manmade factors to be blamed for the deluge, within and without.
The flood-forecasting centre in Dhaka had forecast that the water levels in the major rivers across the country were rising. Media reports now suggest that more than 80 per cent areas of Sylhet Division have been badly hit by the monsoon flood this year. A number of people died and huge property, public and private infrastructures, roads, railroads, airport, communications and electricity-supply systems have been damaged.
People observe with surprise that the flood has inundated not only the lowlands in four districts of Sylhet Division but also the comparatively highlands and major parts of Sylhet City Corporation. Millions of people were marooned, and many remained incommunicado for days.
Troops have been deployed to help people and assist the disaster-management agencies. Minister for local government, rural development and co-operatives of the Bangladesh Government Tajul Islam on June 18, 2022, instructed the officials of the Local Government Engineering Department and Sylhet City Corporation to remove part of the roads, if needed, to allow floodwater to flow through so that people suffer less in the flood- hit areas.
During the monsoon period, floods are common in Bangladesh. The present monsoon rain caused the third wave of flood in the Sylhet Division. The first wave caused damage to the major rice crop this year in the haor areas of the country. Not all of the farmers could manage to harvest their crop (paddy) due to the early flooding that inundated their fields with premature crop. The second wave of flood was triggered by the pre-monsoon rush of water from upstream in the north-eastern states of India in early May and the floodwater inundated vast areas of Sylhet and Sunamganj districts, destroyed crops in the field and damaged homes, roads etc. The second wave of the flood hit mainly the Sylhet Division and Assam and Meghalaya states of India. It was triggered by huge rain carried by the cyclone 'Ashani.' The water bodies (haors, bills and rivers and streams) and the lowlands remained filled to the brim in the areas due to the earlier floods. The flood-hit areas in Sylhet Division just have started recovering from damage when came the third spell of flood caused by prolonged and heavy monsoon rain in the Sylhet Division as well as onrush of water from the upstream Garo and Khasi hills, Cherapunji areas, of India.
The rains this year have touched several years' records both in the Sylhet Division as well as in the adjacent Cherapunji-Mausiram areas of India. The Mausiram belt in Meghalaya (adjacent to Cherapunji) experienced the highest record of rain (1003,6 millimeters in 24 hours) in 83 years. As reports the' Indian Express', Mausiram area recorded 1003,6mm rain during 17 June 2022 within 24 hours. Indian meteorologists forecast that the intensive rain will continue for several more days.
Saiful Islam, Director of the Institute of Water and Flood Management of BUET, informed that on 17 June the Cherapunji area of Meghalaya received the third-highest precipitation since the history of maintaining records on the subject. On 15 June, Cherapunji area received 811.6mm rain. During 12 - 17 June, Cherapunji experienced 3,300mm rain. The downpour in the upstream of Sylhet Division has played a major role in the devastating flood in the northeastern parts of Bangladesh.
People in the flood-ravaged areas observe that the floodwater has been staying for several days and the levels of water in the water bodies change very slowly. Experts observe that developing unplanned physical infrastructures like roads, dams, sluice gates in the haor areas and in the rivers and streams have played certain roles in holding floodwater for a longer period.
Also, the massive deforestation in the Meghalaya hills enhanced the water flow downstream (Sylhet area). The natural forest covers used to hold a lot of water in the hills and release them slowly. Now, while the natural forests have been cleared on a mass scale in the upstream hilly terrains, rainwater descends rapidly, carrying a lot of silt with it. As a result, all the major rivers and streams in the Sylhet areas have been filled up (with silt and sand). As the rivers' capacities to carry water have been reduced, floodwater rapidly inundated the floodplains and beyond. Moreover, all the drains and charas (natural drains) have been clogged in the Sylhet City Corporation areas with silt and garbage, preventing the water flow. As a result, floodwater entered fast the towns, villages and in the Sylhet city corporation and Sunamganj district-town areas.
Experts further suggest that the climate change has certain impact on the patterns and intensities of rainfall in the north and northeastern parts of the country. They believe that there are further risks of torrential rain and flood-related damage in the country. The reduction in natural forest coverages would further intensity the natural calamities unless we find ways to reduce the reasons that negatively impact the climate.
The experts warn to avoid construction works for the infrastructural projects, like roads, bridges, dams, sluice gates etc, in the haor areas of the country without professional environment-impact assessment and their management plans. They suggest that detailed environmental impact assessment, impact-mitigation measures and monitoring of the project impacts for infrastructure building in the haor areas should be incorporated as preconditions for projects approval. Regular river dredging should be carried out for enabling the rivers to carry floodwater quickly in the northern and northeastern parts of the country through the Meghna river systems into the Bay of Bengal. Bangladesh will require enhanced cooperation with India and other neighbours for receiving more information on weather and for improving disaster- management capacities both for people and for their property.

The author is a mining engineer who writes on energy and environment issues.
[email protected]