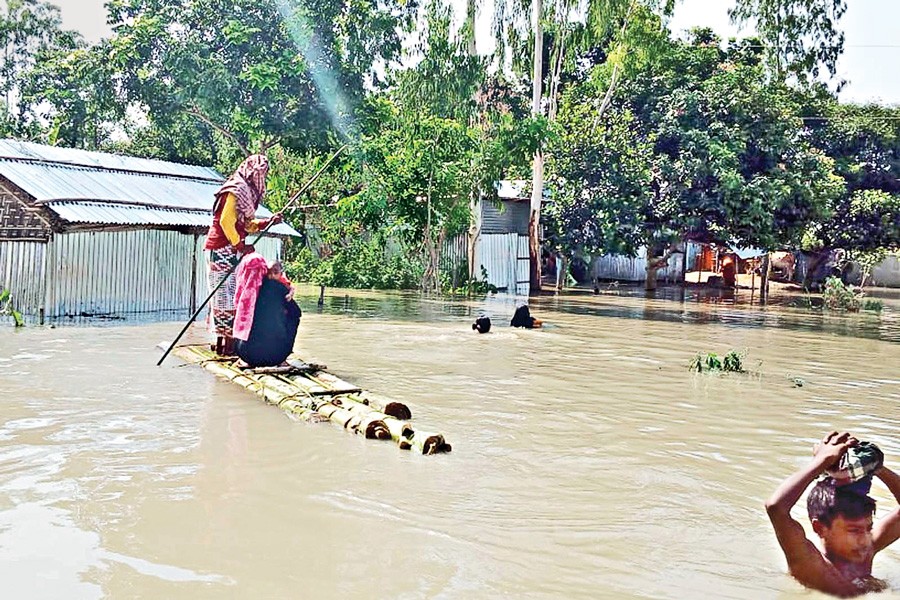 SIRAJGANJ, Jun 30 (Agencies): The low-lying areas of five upazilas in Sirajganj were newly flooded as the water level of Jamuna River continued to rise due to heavy shower.
The water was flowing 70cm above the danger level at Kajipur point land at 45cm at Sirajganj point, said local Water Development Board Deputy divisional engineer AKM Rafikul Islam.
"The flood can take devastating form if the water level continues to rise in such way," he said.
Many families are already trapped due to waterlogging and many took shelter at flood control embankments, he said.
Most of the low lying areas of Shahjadpur, Belkuchi, Chawhali, Kazipur and Sadar upazilas went under water, he added.
A local farmer said they have no option but to cut down the jute plants early despite the fact that they would suffer loss.
Deputy Commissioner's office said they have distributed necessary relief materials in five upazilas.
Meanwhile another report from Rangpur adds: The flood situation remained stable with an improving trend during the last 24 hours ending at 9 am today with falls in water levels of the major rivers in the northern districts on the Brahmaputra basin.
"The situation is getting normal in Nilphamari and Lalmonirhat with recession of flood water while showing an improving trend in Kurigram and Gaibandha," Additional Divisional Commissioner (General) Md. Zakir Hossain told BSS today.
Meanwhile, the district and upazila administrations in association with local public representatives are continuing relief activities among the affected people in the flood-hit districts, he said.