Israeli missile attack on Syria kills seven fighters
BEIRUT, Feb 14: A missile attack launched from Israel on military targets near Damascus overnight killed three Syrian and four Iranian fighters, a war monitor said Friday. The Syrian Observatory for Human Rights said the strikes on the Damascus airport area had killed at least three Syrian soldiers and four members of Iran's Revolutionary Guard. — Arab News
Death toll in Peru tanker explosion rises to 30
LIMA, Feb 14: The death toll from the explosion of a gas tanker in Lima last month has risen to 30, Peru's ministry of health said Thursday. Two women and a man were the most recent to succumb to burns from a fireball that occurred when the tanker truck carrying 10,000 liters (2,642 gallons) of liquefied gas exploded on January 23. Initially only two people were killed and 50 injured, but the death toll has continued to rise due to the severity of their burns. — AFP
US, China, Russia slammed by German president 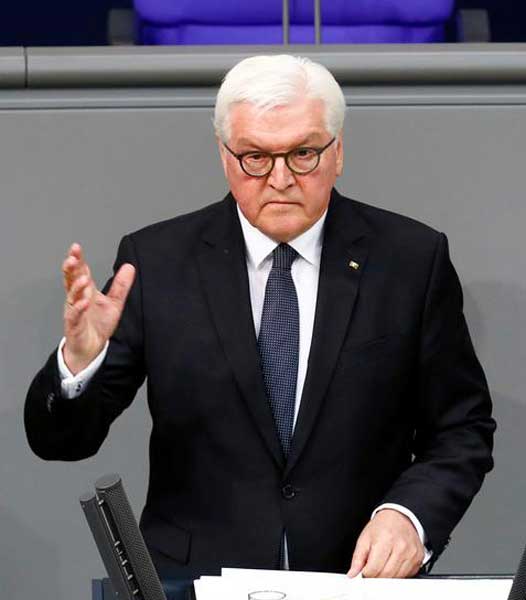 MUNICH, Feb 14: Germany’s president took an indirect swipe at U.S. President Donald Trump on Friday in accusing Washington, China and Russia of stoking global mistrust and insecurity with a “great powers” competition” that could threaten a new nuclear arms race. In opening remarks at the annual Munich Security Conference, German President Frank-Walter Steinmeier deplored the three big powers’ approach to global affairs and, without naming Trump, took issue with his vow to “make America great again”. “‘Great again’ - even at the expense of neighbors and partners,” quipped Steinmeier, a former Social Democrat foreign minister whose comments on foreign policy carry authority. As foreign minister in 2014, he was central to the so-called “Munich consensus” when German leaders said Berlin was ready to assume more responsibility in global affairs. — Reuters
Iran starts election campaign
DUBAI, Feb 14: Iran’s week-long parliamentary election campaign started on Thursday, state TV reported, a vote seen as a popularity test for the clerical establishment at a time when relations with Washington are at their worst since the 1979 Islamic revolution. The Guardian Council, which must approve candidates, has rejected around 6,850 moderate or conservative hopefuls in favor of hard-liners from among the 14,000 applicants seeking to contest the Feb. 21 vote. — Arab News
Antarctic island hits record temperature of 20.75C
Seymour Island, Feb 14: Antarctica has exceeded 20C for the first time, after researchers logged a temperature of 20.75C on an island off the coast of the peninsula. Brazilian scientist Carlos Schaefer told the news agency they had "never seen a temperature this high in Antarctica". But he warned the temperature, logged on 9 February, was just one reading and not part of a long-term data set. — BBC