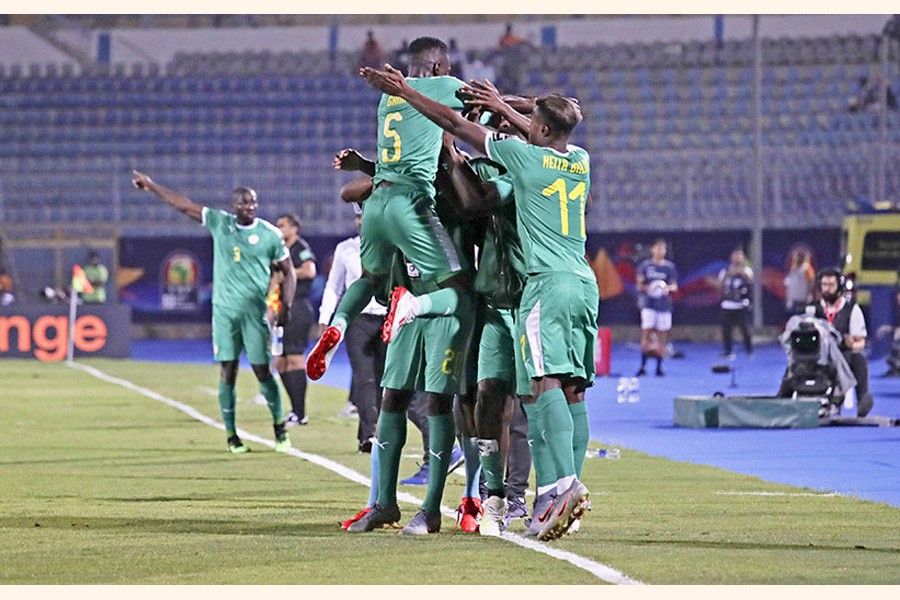 CAIRO, July 11 (AP): Nigeria and Senegal went through to the semifinals and VAR was straight into the spotlight on its debut at the African Cup of Nations on Wednesday.
This time, the often-contentious referee video review system got it right.
Nigeria beat South Africa 2-1 with a winning goal bundled in from a corner by William Troost-Ekong with just a minute to go.
Samuel Chukwueze gave Nigeria the lead in the first half at Cairo International Stadium. Bongani Zungu equalized in the 71st for South Africa when his looping header from a free kick, ruled out initially for offside, was correctly allowed to stand after a VAR referral that took about five minutes. Zungu's was one of three goals to be looked at by VAR on the first day the system was being used at the African Cup. It's in play in Egypt from the quarterfinals onwards. That VAR decision became decidedly less important when defender Troost-Ekong forced in a corner off his knee at the very end to win it for three-time champion Nigeria.
"We are lucky in the end to score this second goal," Nigeria coach Gernot Rohr said. "But we are happy."
Senegal was the first team through to the last four and is a step closer to its first African title after beating Benin 1-0 across Cairo at the 30 June Stadium, where Liverpool forward Sadio Mane had two goals ruled out for offside through VAR in a frantic second half.
But in between the disallowed goals, Idrissa Gueye scored in the 70th minute. Gueye made a surging run from deep and was played in by a deft touch from Mane, who was often the catalyst for Senegal. Going at full pace, Gueye swept his shot past Benin goalkeeper Owolabi Kassifa to seal it.