No good time for construction work 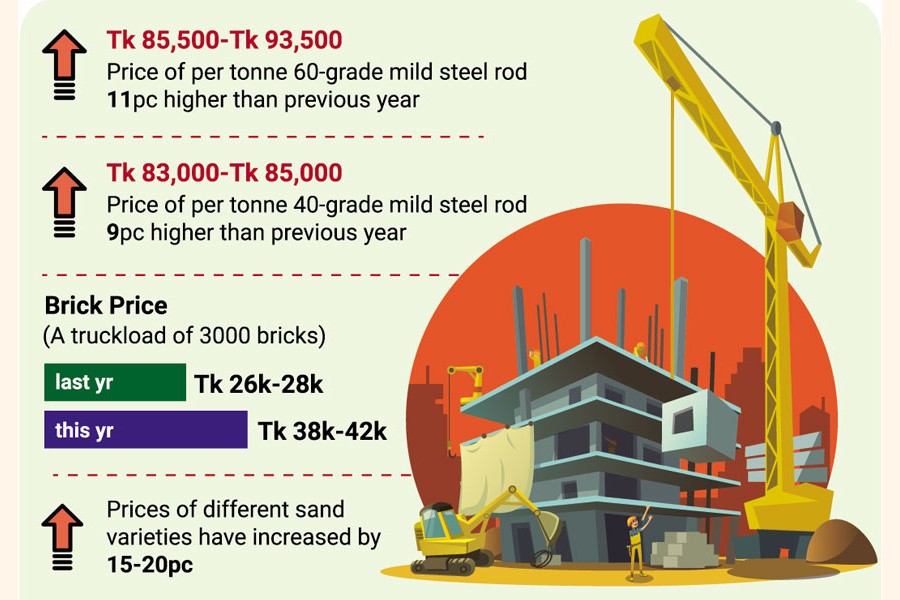 Demand for key construction materials like steel rod, cement and bricks remains lower in recent times mainly due to their increased price, insiders say.
As a result, many realtors have stopped or slowed down construction work of a number of projects since they fear that the upward price would result in losses for them, they add.
However, manufacturers and traders say prices of the building materials have increased mainly due to higher costs in procuring raw materials from the international market.
To them, the devaluation of Bangladeshi taka against US dollar in international trade and swollen energy price in the local market contributed to the increased manufacturing and transportation costs.
Mahbub Rahman, a retailer in the city's Nawabpur Road area, said better quality or 72 grade mild steel (MS) rod is selling at Tk 88,000-94,000 per tonne, depending on brands, in the recent days.
The price is significantly higher this year compared to the previous year, he told the FE.
"Whatever the price is, there are limited sales of the steel rods - and there is no sign of immediate recovery."
According to data available with the Trading Corporation of Bangladesh (TCB), as of November 23 (Wednesday), best-quality or 60-grade mild steel rod was selling between Tk 85,500 and Tk 93,500 per tonne.
The TCB data also reveal that the latest price is around 11 per cent higher than that in the corresponding period of last year and it has remained unchanged for the last one month.
Besides, 40-grade rod is selling between Tk 83,000 and Tk 85,000 per tonne - the price is around nine per cent higher than that in the same period a year ago.
Deputy Managing Director (DMD) of Bangladesh Steel Re-Rolling Mills (BSRM) Tapan Sengupta said the millers are facing serious trouble as the cost of doing business has marked a significant rise.
Acknowledging the lower demand for the materials, he said, "The demand is expected to rise sharply when the brick kiln comes to full production."
Brick price has also marked a significant rise on the back of higher price of coal - used by the kilns.
A trader in the city's Gabtoli Balur Ghat area, Sohrab Mia, said at present a truckload of 3,000 bricks is selling at Tk 38,000-42,000, which was Tk 26,000-28,000 a year ago.
"The cost of coal has reached Tk 31,000 per tonne, which was 22,000 last year," he said.
The majority of the kilns are expected to begin operations in full swing within a month when the cost may increase on the back of upward demand, he said.
Selection sand for concrete mixture (dhalai) is selling at around Tk 10,000, plaster sand at Tk 7,000, and white sand at Tk 2,500-3,000, he said, adding that prices of different sand varieties have increased by 15-20 per cent.
A bag of cement is selling at Tk 500-550 based on brands and quality - the current price is also higher compared to last year.
Real Estate and Housing Association of Bangladesh (REHAB) Vice-President Kamal Mahmud said the latest price hike has dealt a serious blow to them.
Many realtors have stopped or slowed down their ongoing projects since the price volatility is creating uncertainty for them, he observed.
"The cost per unit is set to rise by at least 30 per cent than that we estimated two or three years ago," he said.
The government should take comprehensive measures to bring transparency in the trade of building materials, he demanded.
With the current market trend, the dream of owning a shelter for the middle class is fading away, he added.