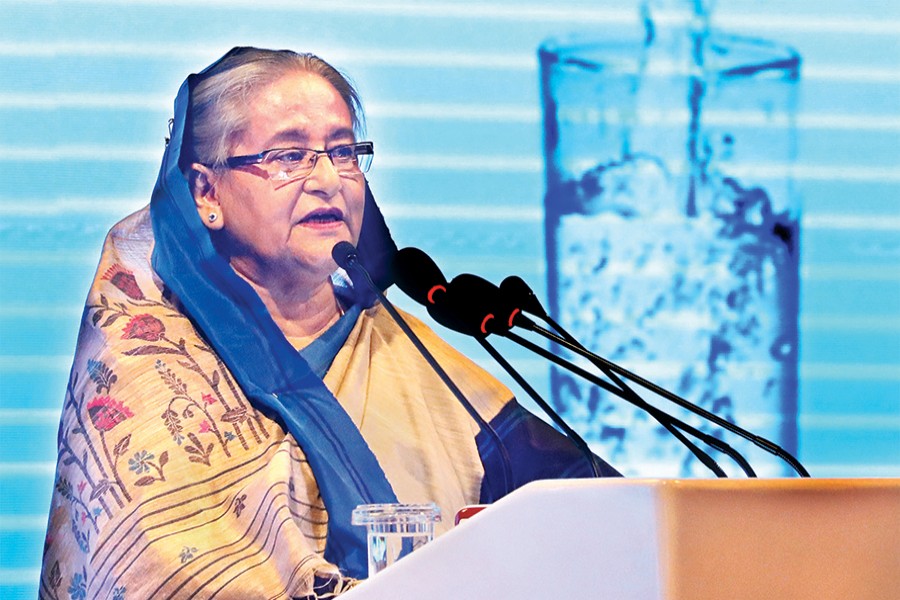 Prime Minister Sheikh Hasina urged on Thursday the city dwellers to exercise austerity while using water since a significant amount of money is spent on water treatment, reports UNB.
"I'd like to urge all to be conscious over the use of water. Everyone will have to pay a special attention so that water is not wasted," she said while digitally opening two water plants and laying the foundation stone of another plant of Dhaka Water Supply and Sewerage Authority (DWASA) from a city hotel.
Sheikh Hasina inaugurated the Padma (Jashaldia) Water Treatment Plant (Phase-1) and the Well Field Construction Project in the Tetulzhora-Bhakurta area of Savar Upazila Phase-I.
Dhaka city will receive a total of 600 million litres of water a day from the two plants - 450 million from Jashaldia plant and 150 million from Savar plant.
The Prime Minister laid the foundation stone of Construction of Gandharbpur Water Treatment Plant at Rupganj under Dhaka Environmentally Sustainable Water Supply Project.
She said all should be careful over the use of water considering that a huge amount of money is spent on water treatment.
"You all will show austerity in using water," she said. Noting that DWASA is a commercial service providing entity, she urged all to extended all-out cooperation to DWASA.
At the same time, the Prime Minister also directed DWASA to be more active and dynamic in implementing the development projects and goals for expanding the facilities for the city dwellers.
She also asked DWASA to be sincere over maintenance of the newly-opened water plants and expediting the construction work of Gandharbpur Water Treatment Plant.
LGRD and Cooperatives Minister Md Tazul Islam presided over the function, while Local Government Division Secretary Helal Uddin Ahmed, Chinese Ambassador in Bangladesh Li Jiming, South Korean Ambassador in Dhaka Hu Kang-il, ADB Country Director Manmohan Parkash and DWASA Managing Director Taqsem A Khan spoke on the occasion.
The Prime Minister said her government, assuming power in 2009, took a comprehensive plan for DWASA to bring radical changes in water supply.
Now DWASA has the capacity to supply surplus water against the demand, she said.
Hasina said her government is now ensuring safe water for other divisional cities, while taking measures to ensure safe water for district and upazila towns across the country.
She said the government's goal is to ensure safe water even at the union level, and noted that the government is working to ensure safe water across the country.
The Prime Minister said the government is working to extend urban facilities to villages.