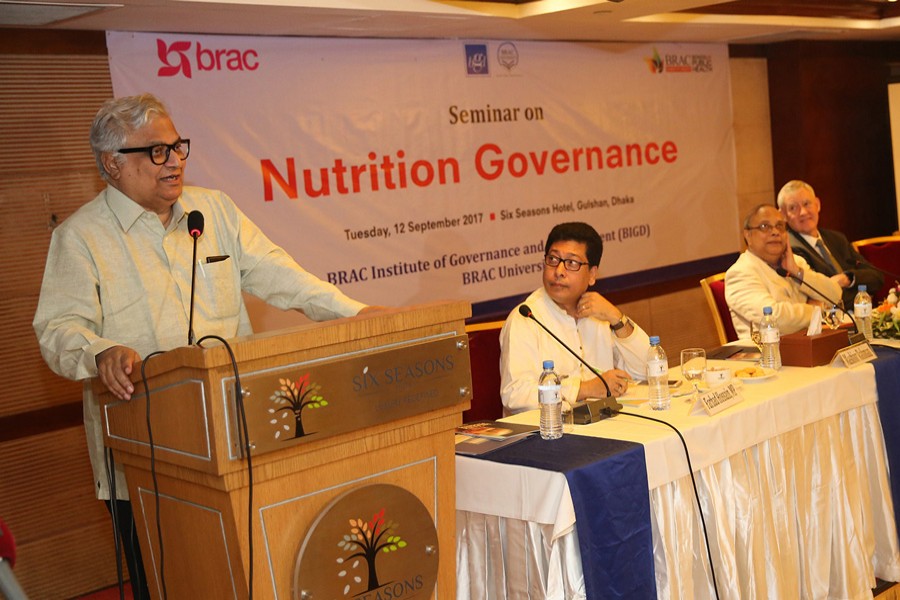 Prime Minister's economic affairs adviser Dr Mashiur Rahman speaking as the chief guest at a seminar on 'Nutrition Governance' organised by BRAC Institute of Governance and Development (BIGD) at a city hotel on Tuesday. — FE Photo

Speakers at a seminar on Tuesday called for separate and increased budgetary allocation to ensure improved nutrition in the country especially for pregnant and lactating mothers and their babies.
They also laid emphasis on agricultural diversification and expansion of social safety net to put an end to stunting and wasting in children less than five years of age by 2025 and eliminating all forms of malnutrition to meet the second target of the Sustainable Development Goals (SDGs) by 2030.
The speakers made the calls at a seminar titled 'Nutrition Governance' organised by BRAC Institute of Governance and Development (BIGD) at a hotel in the city's Gulshan-2.
Prime Minister's economic affairs adviser Dr Mashiur Rahman attended the programme as the chief guest.
Presided over by BIGD executive director Dr Sultan Hafeez Rahman, the seminar was also addressed by UNICEF country representative Edouard Beigbeder, World Food Prize 2016 co-winner Dr Howarth Bouis, UNICEF chief (nutrition section) Anuradha Narayan, BRAC Health, Nutrition and Population Programme head Dr Mahfuza Rifat, and BIGD research fellow Shanawez Hossain.
Speaking on the occasion, Mr Mashiur said Bangladesh has attained progress in food security and now the country requires agricultural diversification to create alternative sources of nutrition.
He said nutrition components should be included in the social safety net for better outreach programme for the communities.
"However, we need more efficient and competent professionals working in the sector with increased budgetary allocation, but the government has its limitation too", he said.
Meanwhile, the Organisation for Economic Co-operation and Development (OECD) countries which are the main sources of such aid (in health sector) have not been so generous as they promised to be.
Most of these countries (OECD) now have their own problem as they are going through economic downturn and the recovery is somewhat quite slow, Mashiur added.
Referring to Bangladesh's significant progress in reducing chronic malnutrition in last decade, Mr Beigbeder said still one in three children in the country are having stunted growth despite the achievement, which accounts for nearly 5.5 million children being deprived of their right to survival and development.
He called upon the government to work for effective implementation of the National Plan of Action on Nutrition (NPAN) by making operational the Bangladesh National Nutrition Council (BNNC) through increased budgetary allocation.
The UNICEF country representative also said that ensuring nutrition of its younger generation will bring the country middle-income status.
Presenting a research paper titled 'Nutrition Governance: Coordination, Cooperation and Collaboration', BIGD research fellow Mr Shanawez said coordination among multi sectors and government departments, reaching remote areas, unawareness of people, detection and management of acute malnutrition and growing rate of obesity are the key challenges towards ensuring nutrition for all.
Citing Bangladesh Demographic and Health Survey 2014, UNICEF official Ms Narayan said around 36.4 per cent of the children less than five years in the country are stunted due to malnutrition while the deficiency attributed to 50 per cent of child deaths.
She said the country has attained real progress in reducing chronic malnutrition (stunting) as it came down to around 36 per cent in 2014 from 45 per cent in 2000.
However, Bangladesh is unlikely to meet its WHO target in reducing malnutrition by 2025 at current drop rate.
She also said according to the analysis on Return on Investment (ROI) by Copenhagen Consensus Center, investments in nutrition can increase GDP by 3.0 per cent to 8.0 per cent.
That means it could lead to increased economic productively beyond Tk 70 billion in just next 10 years, she added.
[email protected]