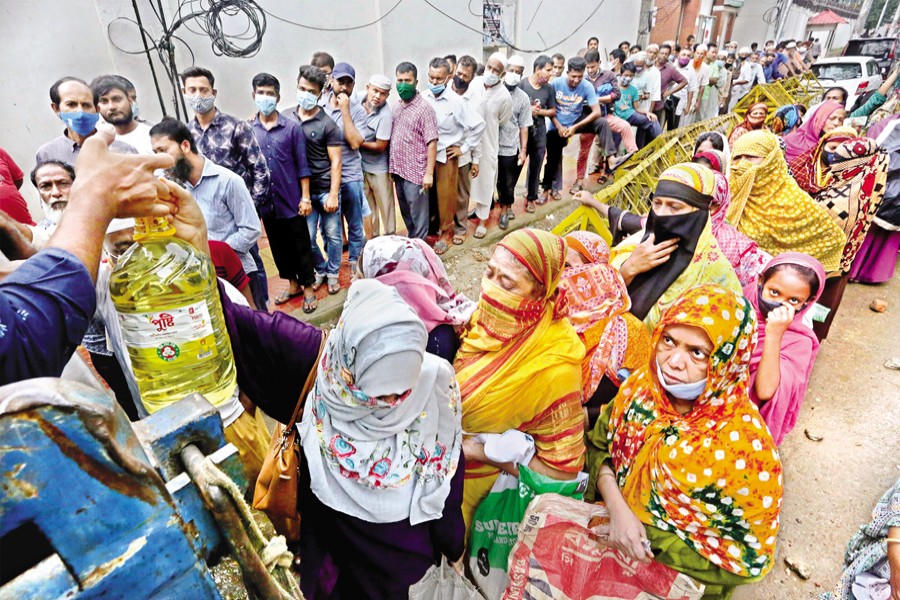 The government is set to enhance further the price under the open market sale (OMS) programme.
If the Trading Corporation of Bangladesh (TCB) revises price, one litre of OMS soybean oil will cost Tk 110 from existing Tk 100.
The price gap between OMS and kitchen market soybean is gradually narrowing due to readjustment of prices under the OMS programme.
The gap will be narrowed down to Tk 43 a litre if the new OMS price is implemented countrywide.
The gap was over Tk 45 per litre previously.
The price of the OMS soybean oil per litre was Tk 80 in April 2020.
Later, the TCB fixed the rate at Tk 90.
Currently, soybean oil is being sold at Tk 100 per litre by TCB trucks and dealers.
It will now be traded at Tk 110 from the next OMS programme.
The decision is being made in view of the upward movement of edible oil in the international market.
The TCB's procurement price is thus increasing, according to a senior commerce ministry official.
Lower-income consumers' woes are set to be intensified further as soybean oil prices have been raised to Tk 110 a litre, a regular OMS consumer said.
The maximum retail price of edible oil has been raised from Tk 153 a litre following a surge in the international market on May 27.
[email protected]