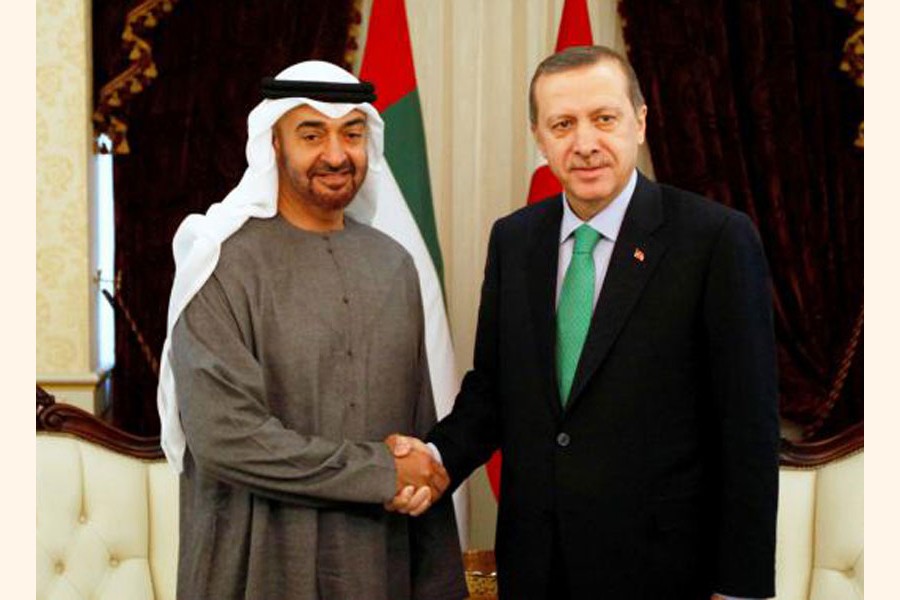 ANKARA, Nov 25 (AFP): Abu Dhabi's Crown Prince Sheikh Mohammed bin Zayed held talks with Turkish President Recep Tayyip Erdogan in Ankara on Wednesday, opening a new chapter in relations between the regional rivals.
The first high-level visit to Turkey since 2012 comes a day after the Turkish lira crashed, the latest crisis in a tumultuous period for the economy.
Erdogan greeted Sheikh Mohammed on the ceremonial blue carpet at the presidential palace in Ankara before they went into talks.
The meeting was followed by a signing ceremony for several agreements whose content was not divulged. A formal dinner was planned later at the palace.
The groundwork was laid for the rapprochement with a visit in August by a UAE delegation, as well as a phone call between Erdogan and Sheikh Mohammed, UAE's de facto ruler.
The UAE and Turkey backed opposing sides in the Libyan conflict and have diverging opinions on other regional issues such as gas exploration in the eastern Mediterranean.
Relations were particularly tense after a Saudi Arabia-led blockade on Qatar by Arab countries including the UAE in 2017. Doha is one of Ankara's closest allies.
Erdogan has this year sought to improve ties with regional rivals including Egypt in the face of increasing diplomatic isolation that has caused foreign investment to dry up -- particularly from the West.
Investors have become skittish over what they see as Erdogan's unorthodox thinking on interest rates.