Yet another garbage truck crash kills youth in city 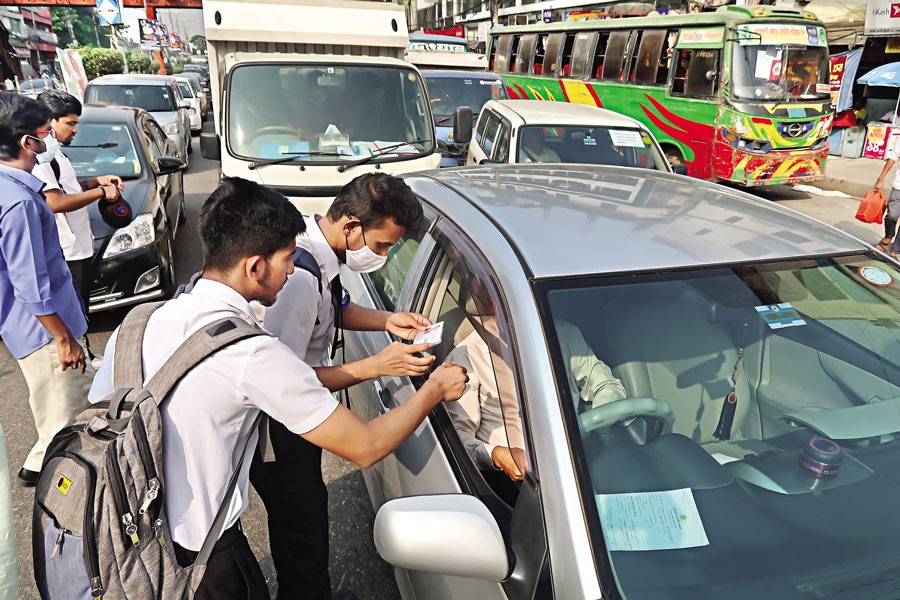 In less than 24 hours, another young man was killed as a garbage-carrying truck of Dhaka North City Corporation (DNCC) knocked down him near Bashundhara Shopping Mall at Panthapath in the city on Thursday.
The deceased was identified as Kabir Ahsan Khan (35), Khan, a former employee of Bangla daily Prorhom Alo.
The driver of the killer truck and his helper managed to get away after the accident.
According to pedestrians and the police station concerned, a garbage-carrying truck of DNCC hit the motorcycle of Kabir Ahsan near Bashundhara Shopping Mall at around 11:00 am leaving him severely injured.
He was rushed to Dhaka Medical College Hospital where attending doctors declared him dead. Kabir hailed from Jhalokhati district.
The deceased's wife told the media that her husband came out of home to go to Mirpur for business purpose before meeting the accident.
On the day before another garbage-carrying truck of Dhaka South City Corporation (DSCC) ran over Naim Hasan, a student of Notre Dame College, near Gulistan Hall market in the city, leaving him dead.
UNB report adds: Students of different educational institutions, including Notre Dame College, staged demonstrations in different parts of the city on Thursday protesting the death of Naim Hasan and demanding road safety.
Students in Motijheel's Shapla Chattar area, Farmgate, Uttara Azampur, Asadgate, Mirpur, Gulistan, and Bailey Road took to the streets and put up barricades to protest the death of Naim.
Vehicular movement in different parts of the city came to a halt due to the demonstrations, creating traffic congestion that caused immense suffering to the commuters.
Students of Notre Dame College took position at Shapla Chattar around 11 am, halting vehicular movement.
Later they from a rally near Gulistan's Zero-point gave a 48-hour ultimatum to ensure justice for the death of Naim Hasan.
They warned that if their demand was not met within the deadline they would again take to streets from Sunday.
Besides, a section of students blocked a portion of Bailey Road, Asadgate, Mirpur and Farmgate areas in the city demanding road safety.
Abu Raihan Md Saleh, joint commissioner (traffic north), said, "Traffic congestions were seen in different parts of the city including Uttara Azampur, Gulistan, Farmgate and Asadgate as students were staging demonstrations demanding steps to ensure safe road and half bus fare for them."
Students of other institutions including Viqarunnisa Noon School and College also staged demonstrations near Shantinagar demanding safe roads and half bus fare.
The demonstrating students demanded that the government immediately make an announcement of taking half fare from them by the public transport.
Another report adds: A Dhaka court on Thursday placed the driver of the truck that killed Notre Dame College student Naim Hasan on a three-day remand in a case filed over the accident.
Dhaka Additional Chief Metropolitan Magistrate Tofazzal Hossain passed the order after investigation officer of the case Anisur Rahman, sub-inspector of Paltan police station, sought a seven-day remand for interrogating driver Russel Khan.
Besides, defense lawyer Firoz Alam submitted a petition seeking his bail which the court rejected.
Patrol police detained driver Russel Khan while he was fleeing after the accident and seized the truck, said Md A Ahad, deputy police commissioner of Motijheel division of DMP.
A case was filed with Paltan police station in this regard following a complaint lodged by Naim's father.
Russel was neither appointed by DSCC as a driver nor he has any driving license, said the police official.
DSCC driver Harun used to allow Russel to drive the vehicle in his absence, he said.