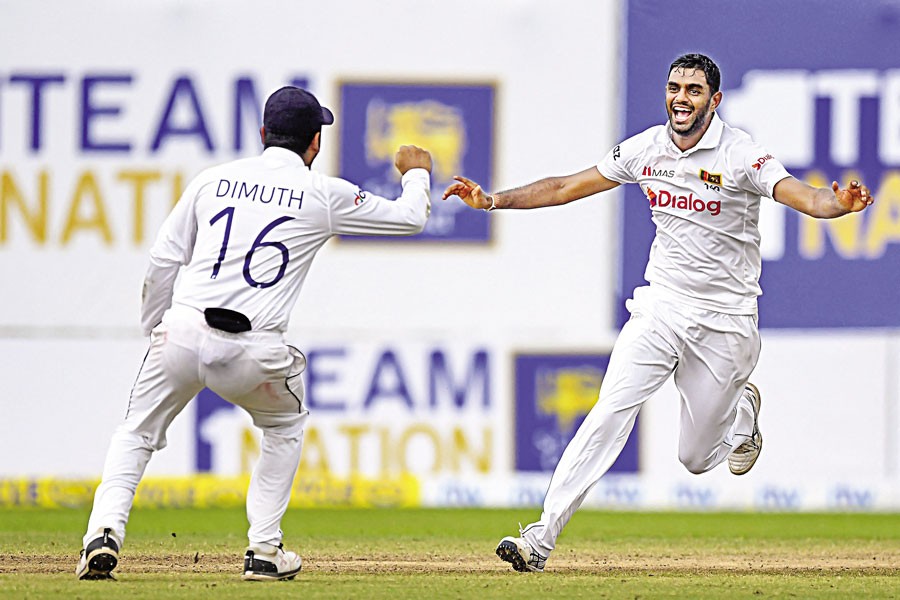 GALLE, Sri Lanka, Nov 25 (AFP): Lasith Embuldeniya took five wickets in the final innings as hosts Sri Lanka thrashed the West Indies by 187 runs in the first Test on Thursday to surge 1-0 up in the two-match series.

Chasing a hefty target of 348, West Indies were bowled out for 160 before tea on the final day, with Nkrumah Bonner the lone warrior with an unbeaten 68 on a turning wicket at Galle International Stadium.

Bonner was one of only three West Indies batsmen to make it into double figures in their second innings, along with Joshua Da Silva, who made 54, and Rahkeem Cornwall who managed 13.

Sri Lanka secured a 156-run first-innings lead thanks to a masterful 147 by Dimuth Karunaratne and four wickets by Praveen Jayawickrama helping to scuttle the visitors for 230.

With rain washing out some play and storm clouds threatening, Karunaratne starred again in Sri Lanka's second innings with 83, aided by Angelo Mathews who made 69, to set the West Indies a mountainous task to win.

On day four the hosts' spin trio made quick work of the West Indies top order with a collapse seeing the tourists lose four wickets in 15 balls for just four runs.

Reeling on 52 for six at the start of the final day, the West Indies clung on with Bonner and Da Silva putting on 100, the West Indies' highest partnership of the match.

Despite the wicket offering plenty of assistance, the two batsmen tackled the Sri Lankan spin threat well with clever use of footwork.

Three chances were also put down by Sri Lanka with Pathum Nissanka the guilty party each time.

It was a crucial seventh-wicket partnership for the tourists after they had been reduced to 18 for six on day four.