Stocks on Wednesday failed to maintain the momentum of the previous day that saw sharp gain. 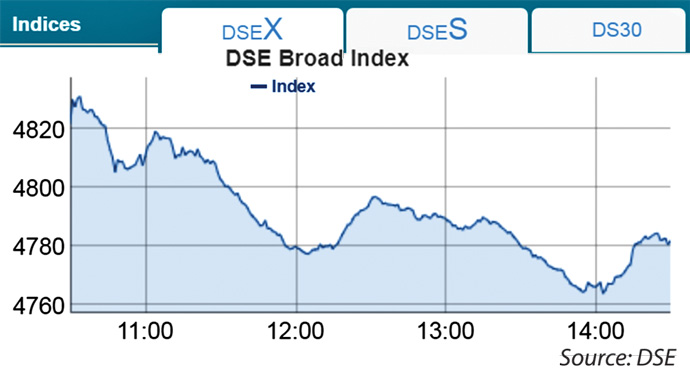 The DSEX has lost a cumulative 1,160 points or nearly 20 per cent in the past nine months since January 24, this year when the index peaked at 5,950.

Market analysts said the institutional investors are suffering from liquidity crunch while the retail investors are not confident enough to inject funds into stocks amid a gloomy market outlook, taking the market in the deep red zone again.

The general investors remain unconvinced by ICB's announcement to provide support to the flagging market, so despite a jump of 110 points on Tuesday most of them washed off their portfolio, he noted.

On Monday, the Investment Corporation of Bangladesh (ICB) declared that it would start buying shares with Tk 2.0 billion it has at present and with another Tk 8.0 billion that it will get from four state-run banks through issuing bonds.

The investors did not find proper guidelines from the meeting of DSE and DSE Brokers' Association held on Tuesday to help revive the country's ailing capital market, commented International Leasing Securities.

The investors' confidence got a battering, which triggered sell-off again amid the depressed market outlook, said a leading broker.

He noted that the investors remained worried about the recent volatility of the market.

The market opened on negative note and the downward trend continued until end of the session with no sign of reversal.

Turnover, a crucial indicator of the market, also fell to Tk 3.24 billion, which was 1.22 per cent lower than the previous day's turnover of Tk 3.28 billion.

The port city's bourse, the Chittagong Stock Exchange, also ended lower with its All Shares Price Index (CASPI)-losing 91 points to close at 14,555 and the Selective Categories Index - CSCX -shedding 54 points to finish at 8845.