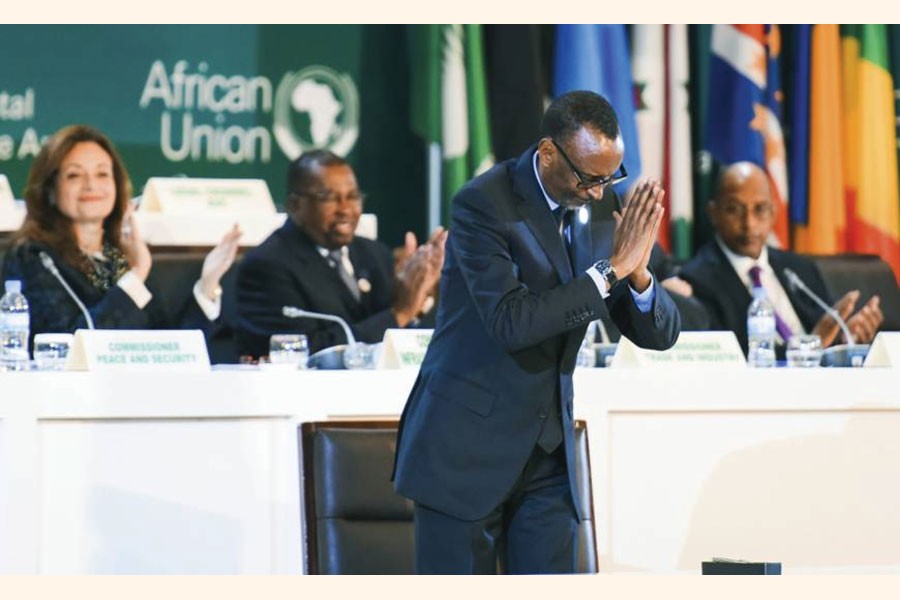 Rwandan President Paul Kagame, who was then chairman of the African Union, gestures after signing the African Continental Free Trade Area Agreement (AfCFTA) during the 10th Extraordinary Session of the AU in Kigali on March 21, 2018. AfCFTA is being called the largest free trade agreement since the creation of the World Trade Organisation. —Photo: AP

Hopes to expand commerce were raised when, in April 2019, Gambia became the 22nd member to ratify the African Continental Free Trade Agreement (AfCFTA). Forty-four countries signed the deal last year, the latest venture to dissolve widespread barriers. Now, with half of all signatories on board, the well-intentioned AfCFTA initiative has so much of catching-up to do that bringing it out of its idealistic cocoon may be just too onerous for even long-term delivery. Besides, other exogenous forces lurk.

Such an outcome may be the lesson we have learned from the fate of other such continental-driven pursuits. On the one hand, Africa boasts the lowest intra-continental trade: 20 per cent, as against 69 per cent across Europe and 59 per cent in Asia (Nick Routley, "This is Africa's ambitious free trade plan, mapped," World Economic Forum, Newsletter, April 09, 2019). On the other, Africa's largest economy, Nigeria, is not one of those 44 signatories, though second-placed South Africa and third-largest Egypt have climbed on-board.

What is heartening about Africa today is its strident steps to whitewash a cruel inheritance. It is the only continent littered with so many artificial boundaries: human groups rarely settle within horizontally-laced and vertically-lined frontiers, since their peripatetic nature translates into a jagged, rugged territorial existence. Australia and the United States, two obvious other cases, should not be compared since they became more "born-free" countries: colonisers either eliminated or subdued natives so new "lifestyles" or culture could be cultivated, whereas, though subjugation was a part and parcel of colonising Africa, as Chinua Achebe's Things Fall Apart classic so dramatically portrays, the continent was far too big, filled with more people than the other two, and involved too many colonising competitors to ever be fully subdued. These turned out to be seeds of both captivity and, as AfCFTA hopes, rejuvenation.

Though that continental commonality may be one driving force behind the latest drive at African countries seeking trade relations among themselves, counter-forces also stem from precisely those same forces: vastness and diversity deter policy coherence and uniformity; but above all, competing external forces can make or break endogenous drives. For example, European efforts to cultivate partnerships along the continent's northern rim employs a far different formula accenting bottom-up inducements that accent reform than, for example, the colonial-type rapacious top-down Chinese thrusts along the east coast. Yet, even these contrasting forces cannot but converge selectively: infrastructures being built with Chinese money cannot but open up more of the hinterland, and thereby bring more diverse communities together, in turn spurring as many democratic pressures, like empowerment of sorts, as authoritarian, such as those accompanying accumulated instincts. This may be the African Achilles' Heel: taming those accumulative instincts, as other countries have constantly sought to do legislatively and institutionally.

Continent-wide commerce has a history of being locally stalked. We are all familiar with how Latin America, united by common Iberian traits and history, has often led the developmental thrusts in former colonised or backward countries. It became the flag-bearer of import-substitution industrialisation after World War II, yet in spite of all the similarities stemming from this policy-approach, it had a hard time transferring a mutuality mindset into a free-trade counterpart subsequently. The Latin American Free Trade Area of the Americas of the 1960s fizzled out by the 1970s, as did the US-led Free Trade Area of the Americas of the 1990s by the early 21st century. That did not mean free-trade died out, but it was best illustrated in Latin pockets than in the Latin whole: MERCOSUR (Southern Common Market) did better, but also carried frailties and fragilities, as too the Andean Pact.

Even the continent with maximum FTA (free-trade agreements) mileage is not spot-free. Progressing from a sector-specific compact (the European Coal and Steel Community in the early 1950s), the European Union has evolved closer to the regional integration ideal than all others, in spite of the Brexit debacle. In fact, Brexit has become a noisy policy option simply because past calls to rein in nationalistic controls went unheeded. Even in its sector age (the 1950s), European integrative efforts became strings pulled by states, the bigger, the greater. Farm policy kept the heavyweights (France and West Germany) apart, indeed, only through an uneasy truce through the Common Agricultural Policy, did the European Economic Community begin to gel after the 1965 Empty Chair crisis. Even as a Common Market (the third stage, after forging free-trade agreements and concluding customs union arrangements), in the later 1960s and 1970s, it faced a rocky road, helped no less by the collapse of the "gold" window (abandoning the Bretton Woods staple of a gold standard in commercial relations), and 1974 petroleum price-hikes. When the European Community became the European Union (from 1992 through the Maastricht arrangements of a single currency), not all members could or would hop on, at least not immediately. Great Britain and some countries in the Nordic flank largely stayed aloof, the first hint that full-fledged continent-wide integration was impossible, yet not dispensable. The Brexit mindset was already brewing even in the halcyon 1990s economic climate.

Like Latin America and West Europe, Africa's continental mindset evolved in fits and starts. It was partly sparked by global trade-unionism of less-developed-country, like the North-South differences simmering up from the early 1970s. There were also endogenously-driven regional spurts, like the Economic Community of West African States (ECOWAS) in 1975, and roughly about the same time, the Common Market for Eastern and Southern Africa (COMESA), Arab Maghreb Union (AMU), and so forth, indicating the inherent segmentation that haunts continent-sized efforts. In fact, the world's oldest operational customs union is in Africa, the Southern Africa Customs Union. Exogenous spurs were also part of the integrative efforts, mostly with European Community/Union fingerprints, like the 1995 Euromed Partnership (Barcelona Process) among 43 coastal Mediterranean countries in the north.

All of these found multilateral platforms, particularly the GATT (General Agreement on Tariffs and Trade) Article XXIV (on liberalising trade), or international impulses, mostly UN principles, and so forth. In addition to the inability to progress beyond any given region, these compacts also faced internal conflicts, lots of them strewn across the continent and reminding everyone of the historical abuse wrought upon Africa: those artificial borders to forge unnatural nationalities out of ancient tribes produced many conflicts, as between Hutus and Tutsis, and within South Africa, and dotting the entire African landscape no matter where one goes.

A final coffin on African continental possibilities could be the advent of China, with its complete Atlantic antithesis, not just the World Bank and the International Monetary Fund (IMF) for developmental funds and money management, but also GATT and World Trade Organisation (WTO) bodies on trade. Why this may be the last straw in Africa's continental dreams may be because Africa has always faced a Rubicon. As the essay posits, the external context has been pivotal in Africa's unfolding: first through forcible exchanges, like slavery, subsequently institutionalised as colonialism; later a more noblesse-oblige developmental phase initiated by "northern" European countries, for "southern" counterparts; and now China combining both colonial-type exploitation (through the exchange of primary African products, mostly minerals, for secondary, as in manufactured), and developmental thrusts (mostly vitally-needed infrastructures that the funding-starved "north" cannot, or will not, supply), even if risking long-term debt.

Heeling Africa's adventurous foot with its landlocked is key for the continental leap its 44 countries seek. Will it happen? Perhaps, but when is not presently visible.

Dr. Imtiaz A. Hussain is Professor & Head of the Department of Global Studies & Governance at Independent University, Bangladesh.