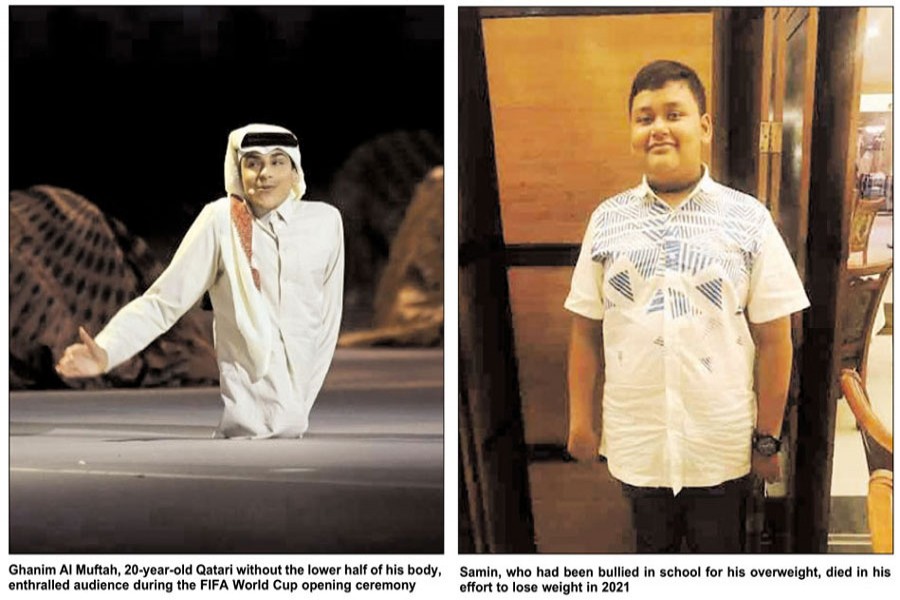 Ghanim Al Muftah is now a well-known face. This 20-year-old Qatari, who has a huge following on social media, stole the opening show of the FIFA World Cup 2022. He recited a verse from the holy Quran and helped Hollywood actor Morgan Freeman welcome everyone to the show themed around unity and tolerance.

But for inspirational Ghanim, it was a moment that might never have happened, had his parents taken a fateful decision more than two decades ago. He was born with an extremely rare genetic condition without the lower half of his body. Even before his birth, his parents knew that he would take birth with half of his body. Prior to his birth, many people had suggested his mother abort him. But she decided not to go ahead with it and said to his father, "I'll be his left leg and you'll be his right leg."

When growing up, Ghanim found it difficult to attend school initially because of teasing and bullying from his classmates. But his mother encouraged him to speak to his classmates, let them know about his condition, and raise awareness for the disabled.

Rather than allowing the condition to stunt his life, Ghanim has learned to overcome obstacles with positivity. He is currently pursuing his university degree, majoring in political science with the goal of becoming a diplomat.

Now let's have a look at our Samin. He was born in Dhaka as a normal, healthy child with much delight to his parents and relatives. He started growing up as a soft-spoken, kind and emphatic young boy. But he was overweight or did not fit the typical definition of good-looking. So, he was bullied as 'fat'. He did not even know that he was not normal. When his school announced a football match, Azwad Ahnaf Karim Samin, a tenth-grader, was as excited about it as any of his classmates. He went up to his teacher, asking her to get registered.

His teacher's initial reaction was, "You cannot participate. Look at you! Can you even run?" Then the teacher made Samin walk in front of the whole class. Everyone in the class laughed at him loudly. As Samin was polite and soft-spoken, he could not protest against this humiliation. Rather, he returned home and shared his ordeal with his mother saying, "I wish I could commit suicide."

For teenagers, school is supposed to be a place of joy. But it was opposite for Samin. Continuous bullying made him scared about going to school. Often, he would fall sick before going to school. He was regular in his coaching classes but school was a place of horror for him.

To get rid of that body shaming, Samin wanted to look skinny. And he started watching YouTube video contents and following a keto diet. Within three months, he lost more than 30 kilogrammes. But by this time, along with some physical issues like ankle-swelling and extreme fatigue, he also developed anorexia nervosa, an eating disorder, where a person becomes scared of eating and when they do eat something, they tend to vomit and throw it up.

In May 2021, Samin's weight stood at only 36 kilogrammes. On 25 June, he was admitted to the United Hospital with pneumonia. The next day at 11:00pm, he passed away.

We all are beautiful in our own ways. There should never be any definition for perfect appearance. And we should never compare anyone with us as we know it very well that everyone of us has been created as individuals. And the media has no right to portray a certain body-type that people should strive for.

Body shaming is hurtful and discriminatory. It should have no place in modern day societies. We should surround ourselves with positive friends and motivate others to be themselves, regardless of their appearance. We just cannot judge people based on their looks.

According to a research, for more than half of children who reported experiencing unfriendly behaviours, their parents were either not aware, or did not consider the actions to be categorised as bullying. So, parents should be aware of their children and their activities. They must talk to them and make them feel free to share anything and everything.

If you are a teacher, your every word means so much to your students. So, before making any comment about anyone, please think twice what impact it can have on your students. Childhood memories shape a child's personality. Having some unwanted memory or incident often leaves an eternal mark on the child's consciousness and severely impacts his/her behavioural patterns.

Ghanim Al Muftah is a champion. He has won all his physical disabilities and showed us the path how one can win even with one's shortcomings. But one thing we must not forget that how Ghanim was brought up by the people surrounding him. This young boy was always accompanied by his parents and family. They have never deserted him. Rather, they helped him climb all the stairs of success. They are always with him like his own shadow.

Had Samin been as fortunate as Ghanim, he would have been here with us playing football with his classmates, shouting for his favourite football team or waving flag on the occasion of their victory, debating with his friends over who is the best footballer, you name it. Qatar's Ghanim could make it but our Samin could not. But we do not want any more Samin in our country.