Can Bangladesh be complacent? 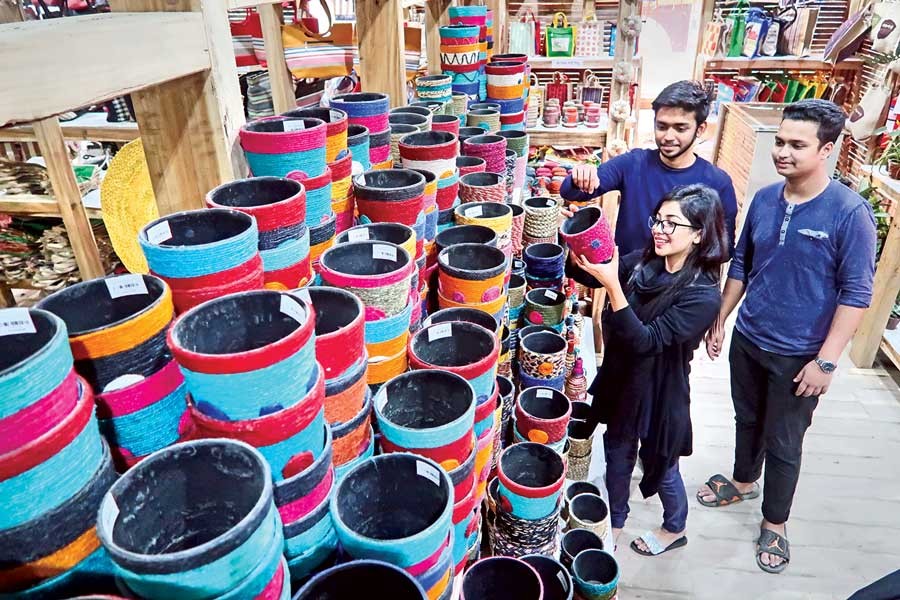 Bangladesh has received considerable praise from the international community for its commendable success in accelerating growth of gross domestic product (GDP). However, development is a multi-dimensional concept. It encompasses, in addition to GDP growth, equitable income distribution, poverty alleviation, human development, employment, price stability etc. The present article seeks to evaluate the achievement of Bangladesh in respect of only growth. The rationale is that it is a headline number which attracts attention of both domestic and foreign analysts. A country's performance can be evaluated in two ways. One is to look at change of the relevant indicators over time; the other is to compare its performance vis-à-vis other countries. This paper uses a mix of both of these approaches. The determinants of the achievements, the underlying challenges and policy initiatives needed to deal with the challenges are also briefly dealt with. 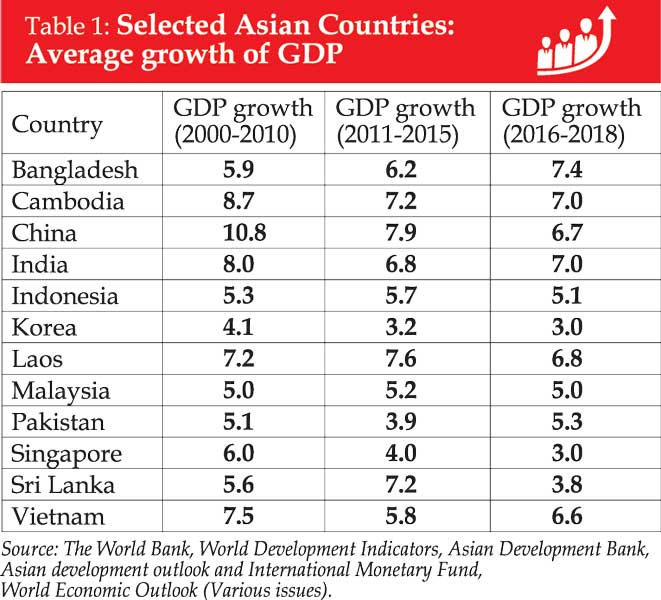 Many factors contribute to a country's growth. Of particular relevance are investment, labour and exports.

Investment: Investment in Bangladesh grew positively, albeit at a rather slow rate, rising from 24% of GDP in 2000 to 31% in 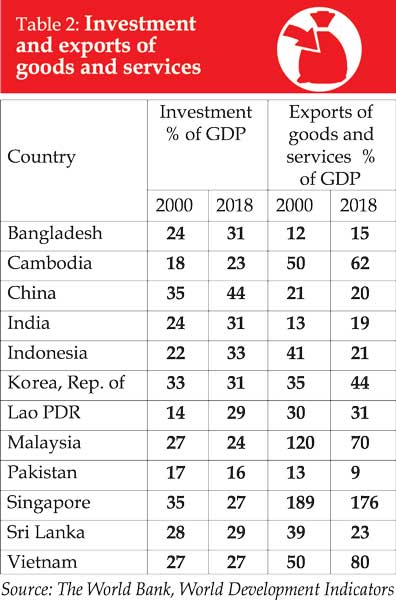 2018 (table 2). Cross-country evidence generally shows that higher investment is associated with higher growth. However, there may be some exceptions. Cambodia, for example, with lower investment/GDP ratio than Bangladesh experienced higher GDP growth during the 2000-2015 period. This raises the question of productivity of investment. At any rate, Bangladesh needs to increase investment/GDP ratio and also improve the productivity of the investment. As regards, the quantum of investment, the increase in ratio has come almost entirely from public sector investment. Private sector investment as proportion of GDP has remained stagnant at about 22% during the last one decade.

It is heartening that according to most recent available information Bangladesh's rank in Ease of Doing Business has gone up by eight notches. Its present ranking is 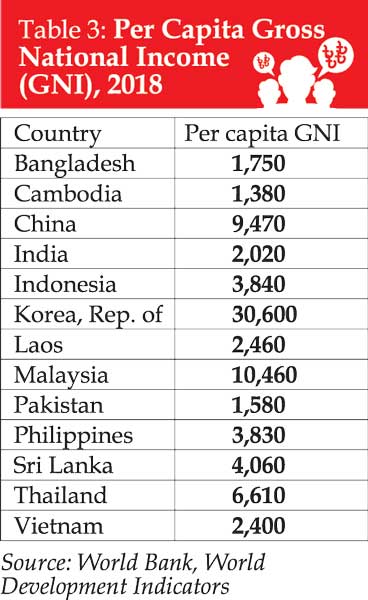 168th implying that 167 countries of the world are performing better than Bangladesh (for a slightly more details regarding Ease of Doing Business and Governance see my paper published in The Financial Express on 16 October, 2019, page 4). With respect to Competitiveness Index published by The World Economic Forum, the rank of Bangladesh in 2018 was 103rd out of 140 countries. That means 102 countries did better than Bangladesh.

The present scenario in the banking sector also poses a major challenge for private sector investment. Non-performing loan ratio rose from 8.8% in December 2015 to 11.7% in June 2019. The absolute amount was Tk. 1,12,425 crore (1,124.25 billion). This official statistics grossly underestimates the real volume of non-performing loans as it excludes rescheduled loans, amounts covered by stay orders from courts and special-mention accounts. According to a recent report by the International Monetary Fund, the amount of non-performing loans would be a staggering figure of Tk. 2,40,167 crore (2,401.67 billion).

The causative factors behind non-performing loans are:

* The incompetence of bank personnel in valuing collateral, assessing potential of future revenues and cash flows from the projects for which loans are given;

* Poor governance of banks leading to loans to friends, relatives or politically connected people irrespective of the merit of their loan proposals;

* Political influence in sanctioning loans as well as their rescheduling and restructuring;

* Ineffective judicial system reflected in huge number of pending cases either in the loan courts or superior courts;

Public investment: There are many challenges associated with public investment in Bangladesh. Too many projects are approved without due consideration for available resources. In consequence projects get allocations considerably below what is stipulated at the time of project approval. This inevitably leads to delayed implementation and cost overrun. In a recent report of the World Bank it has been observed that out of 1034 projects included in Annual Development Program of fiscal year 2015, 154 projects would require 6- 10 years to be completed at the present levels of allocations, 106 between 11 and 100 years and 32 more than 100 years.

In order to address deficiencies in physical infrastructure the government has justifiably approved 10 mega projects which include Padma Bridge, Rooppur Nuclear Power Plant, Matarbari power plant, Maheshkhali LNG terminal, Payra deepsea port, Padma rail link and Dhaka metro rail. But the progress of implementation is rather slow. The costs of projects are frequently revised. To illustrate Padma Bridge project which is considered to be one of the better implemented projects has been revised four times since its inception and the cost has moved up from the initial Tk 10,161 crore to Tk. 39.258 crore. There are also many complaints about corruption in implementation of various projects.

Labour: Bangladesh is poised to reap demographic dividend because of a high proportion of population in the working age group. However, the contribution expected from this dividend remains substantially unrealized. One reason is that despite considerable increase in recent past participation of women in the labour force is relatively low. Among the neighbouring Asian countries only Pakistan has a lower participation of women in the labour force. A second explanation of unrealised potential of the demographic dividend lies in the education sector. Though Bangladesh has achieved universal primary education enrollment, there is a huge rate of dropouts after this level. Among the Asian neighbouring countries enrollment at the tertiary level is the third lowest. Cambodia and Pakistan are the two countries which have slightly lower tertiary level employment.

The quality of education and its market relevance are also open to serious questions. As a result, the business community frequently complain about inadequate availability of employable graduates. The rate of unemployment among graduates is the highest.

The inadequate utilisation of demographic dividend is also underpinned by technological changes which are typically labour-saving. The elasticity of labour absorption with respect to GDP growth has fallen. Jobs in the manufacturing sector declined from 9.53 million in 2013 to 8.76 million in 2017. Obviously it would be inappropriate to halt technological progress. The solution lies in accelerating growth through increased investment so that even if employment per unit of GDP goes down total employment increases.

Exports: There has been notable success in increasing exports. Its proportion to GDP rose from 5% in 1985 to 15% in 2017 (table 2). However, there remains considerable scope for further increase. As of 2018 only Pakistan had a lower export/GDP ratio than Bangladesh. There are a number of important concerns in the area of exports. One concern relates to the recent slowdown. In FY 2017 export growth was only 1.16%, recovered substantially with growth of 5.8% and 10.5% in FY 2018 and FY 2019 respectively. In the first quarter of the current fiscal year there has been a negative growth of -2.9%. The second concern in the area of exports is that the basket is dominated by a single commodity, namely, readymade garments which accounts for well over 80% of total export earnings. The third concern relates to heavy dependence on a few markets, primarily the USA and European Union. The fourth concern is that the anticipated graduation from least developed country category will entail loss of duty -- free and quota -- free access to Europe and some other countries.

* Public sector investment should be based on clearly identified priority and the projects should be completed on scheduled time, supported by adequate allocation of funds.

* The administrative machinery should be made accountable for failure to utilise allocated funds in time.

* Take measures to avail of demographic dividend by providing higher and better quality education and training for the workers, including female workers.

Epilogue: The recent growth performance is undoubtedly praiseworthy. However, this is a source of confidence, but not a basis for complacence. There is still huge income differential with Asian neighbouring countries (table 3). As of 2018 there were only two countries with somewhat lower per capita gross national income than Bangladesh.

Dr. Mirza Azizul Islam is a former Caretaker Government Adviser, Ministries of Finance and Planning, and presently a Professor at BRAC University.