Eradicating poverty by accelerating economic growth and generating employment opportunities through industrialisation is a key policy priority for Bangladesh. The Government of Bangladesh has decided to establish 100 Special Economic Zones (SEZs) for creating 10 million jobs and generating an additional $40 billion exports. By offering attractive fiscal and financial incentives, and serviced industrial plots, these economic zones are expected to mobilise investments from both domestic and foreign sources. The Seventh Five Year Plan of Bangladesh suggests using SEZs as a policy tool for inclusive growth by promoting development in lagging regions within the country.

Regions in Bangladesh exhibit significant differences in many respects including in terms of location and distribution of economic and industrial activities. For example, employment-intensive manufacturing and export-oriented enterprises are largely concentrated in greater Dhaka and Chattogram regions. One issue is then whether SEZs in disadvantaged regions can generate inclusive growth while not affecting overall economic growth.

Regional inclusivity and the role of policy: Policymakers from all over the world must confront a trade-off between balanced spatial distribution of economic activities and the benefits of agglomeration economies that tend to make industrial production concentrated in a few existing growth poles. The 'new economic geography' model, developed by Nobel laureate economist Paul Krugman, is the most powerful analytical framework to demonstrate how clustering forces generate an uneven distribution of production and income across regions. The ensuing agglomeration effects arise from interactions amongst scale economies, cost advantages (including trade costs) associated with geographical locations, factor price differences, etc. Because of these factors, economic regions with higher production activities will be more profitable and will therefore attract even more firms. While there are efficiency gains from the concentration of economic activity in a few locations, it is a major contributor to overall inequality within a country.

Some economists argue that while private sector firms will tend to concentrate in existing growth centres, state-sponsored industry location decisions consider regional balance as a priority issue. However, as the role of the state has been substantially diminished under policy liberalisation and reform programmes, industries are likely to be more spatially concentrated, accentuating regional inequalities. China offers an example of extensive interventions in addressing regional disparities, diverting economic activities from the coast to interior regions. But, critiques point out that replicating Chinese experience elsewhere might not be possible because of the nature of its political and administrative systems and astounding growth performance, facilitating sustained resource commitments for regional transformation to take place. However, programmes like special economic zones can allow countries containing ever-growing regional disparities. 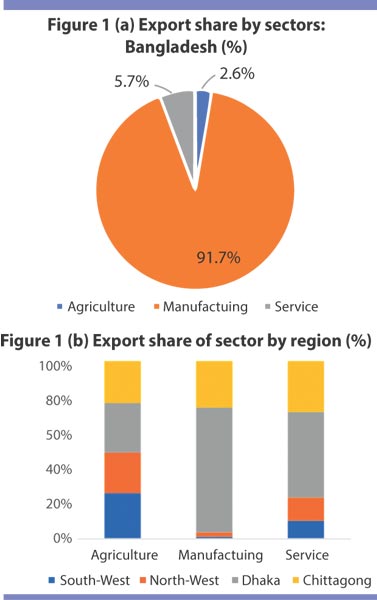 Spatial variation of development in Bangladesh: In Bangladesh, there is a general perception that the western part of the country (comprising the divisions of Barisal, Khulna, Rajshahi, and Rangpur) lags its

eastern counterpart in most socioeconomic indicators. One problem in capturing regional disparities and understanding the impact of any relevant policy options is data deficiencies. Nevertheless, from the available information it can be inferred that north-west and south-west districts in Bangladesh together account for just about 30% of the country's GDP. The greater Dhaka and Chattogram regions account for 87% of the country's manufacturing GDP. As manufacturing constitutes about 92% of Bangladesh's exports (Figures 1a and 1b), virtually all of it comes from these two regions only. The established economic theories, as alluded to earlier, would suggest worsening of the concentration of economic activities further.

Potential impact of SEZ activities in lagging regions: experimental policy simulations: Although the SEZ development work in a large majority of selected zones is at an early stage, it would be useful to undertake some experimental policy simulations to consider the likely impact of new economic zones. Particularly, it is of interest to know how inclusive economic growth and development can be promoted through SEZs. The simulations are conducted using a specially-constructed four-region Social Accounting Matrix (SAM) for Bangladesh.

Simulation scenario (1) - export growth from the newly set up SEZs based on the existing regional production structures: As one of the objectives of SEZ policy is to achieve $40 billion in additional exports by 2030, this simulation assesses the impact 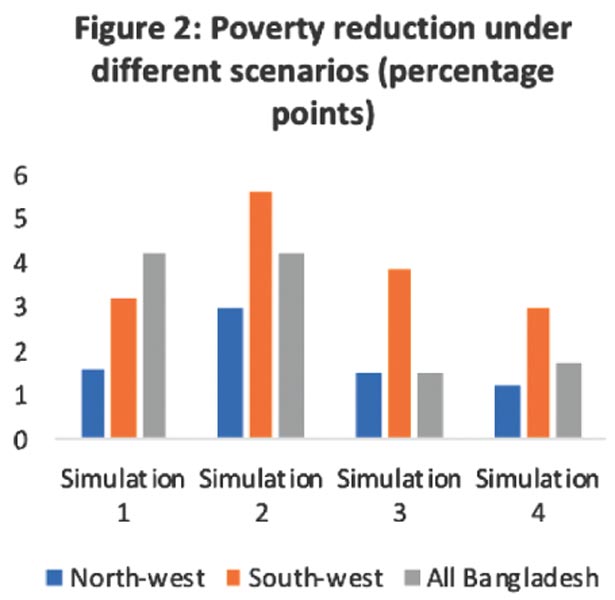 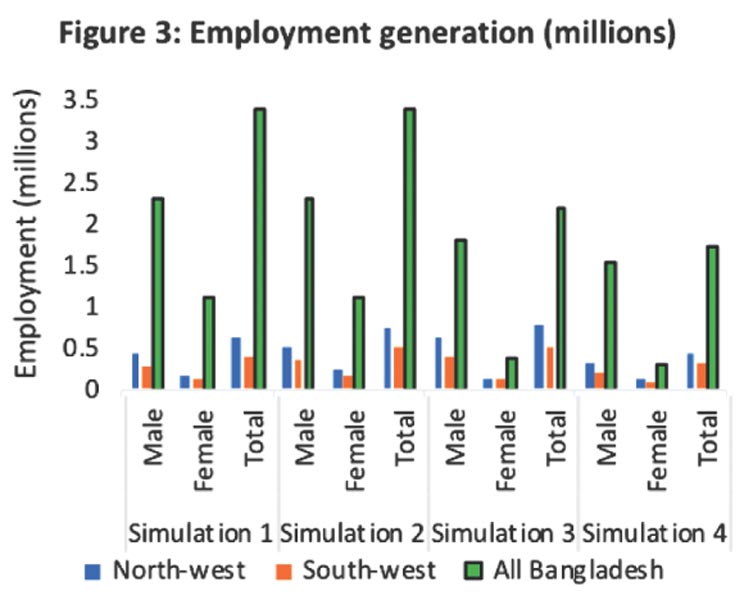 How different types of households participate in economic activities can give important insights into the inclusivity of growth. In simulation 1, most additional production is due to the greater Dhaka and Chattogram regions, but still households in backward regions increase their supplies of labour. However, given increased SEZ production in north-west and south-west regions under simulation 2, small farm and non-farm households in both the regions and lower-skilled households in north-west districts experience much higher demand for their labour (Figure 4). These households are known to comprise much of the vulnerable and excluded groups, and consequently they seem to benefit from the increased SEZ activities in backward regions. The overall growth impact under simulation 2 is slightly higher, and thus there is no growth compromising effects of regionally targeted SEZ policies.

It is important to point out that the policy options are not mutually exclusive; i.e. a combination of the scenarios would be feasible and more appropriate. A mix of scenarios 2, 3 and 4 would be most practical in addressing regional inclusivity. 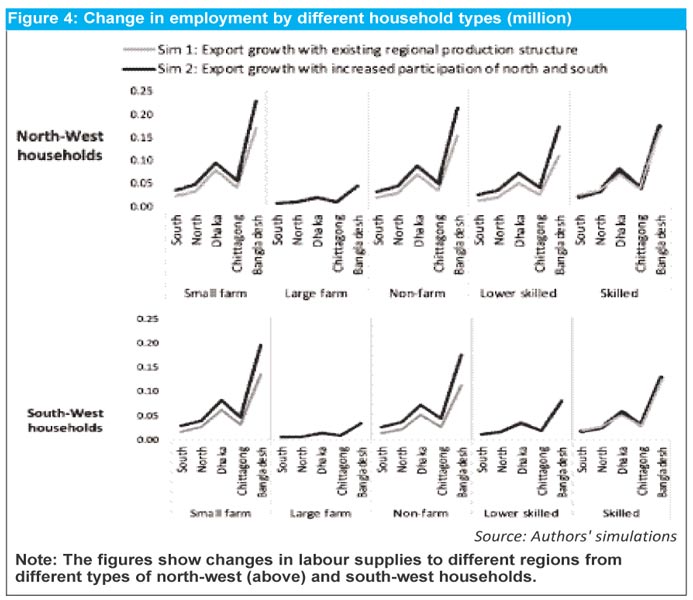 SEZ-led regional development: issues for further consideration: The simulation results above are quite encouraging about the potential impact that SEZs can have on overall output, employment generation and poverty reduction. However, the lagging regions may be subject to certain inherent limitations, yielding less-than-expected outcomes. Bangladesh's experience with export processing zones (EPZs) already provides some hints in this respect. Three of the eight EPZs are in lagging regions. In terms of investment attracted and employment generated, the performance of these three is relatively weak. Particularly, the one in Mongla with easy access to a seaport has the least investment and smallest workforce employed. There are several other factors that must be taken into consideration to make SEZ-led policy effective for promoting regional inclusivity.

* To be a meaningful pull factor, economic zones in lagging regions must offer incentives that do not exist elsewhere or are significantly better than existing ones. The perceived costs of doing business in these regions are much higher, and investors need to be convinced that incentive margins will at least help offset the extra costs of being located in relatively remote regions.

* In the presence of various industry support systems, coordination amongst institutions will be critical. It is important to strike a balance between industrial growth that takes advantage of the growing domestic economy and growth achieved through an export-led strategy. If SEZs are going to be dominated by firms aiming for local sales only, the policy incentives as well as a highly protected trade regime, as highlighted in the 7FYP, could affect export-oriented firms due to anti-export bias in the overall trade policy regime.

* Using agglomeration economies while focusing on regional inclusivity should be given serious consideration. SEZs in lagging regions could suffer from lack of critical mass in attracting firms and investments and creating enough positive spillover effects. Developing too many sub-optimally sized economic zones can also undermine the benefits of economies of scale and externalities. The development of Mirsarai-Feni industrial city could closely resemble the kind of growth centres needed in the north-west and south-west regions for exploiting agglomeration economies.

* Developing lagging-region SEZs as part of economic corridors is important. An economic corridor is envisaged in Bangladesh running from the south-west region of Bangladesh (Khulna Division) to the north-east region of Bangladesh (Sylhet Division) via Dhaka. This can help integrate south-west SEZs with more productive and leading SEZs, particularly in Dhaka. Bangladesh is also pursuing transport connectivity with many Asian countries under various regional initiatives. If they help promote intra-regional trade, investment, and movement of goods through land borders, some of the currently lagging regions in Bangladesh will benefit immensely.

* Ensuring fair access to entrepreneurs, including small and medium-sized enterprises, is extremely important. Land is very scarce in Bangladesh, and serviced industrial plots are even scarcer. In many other developing countries, political economy factors are often used in accessing privileges that SEZs confer, including access to cheap land and fiscal incentives. This must be avoided.

* Existing opportunities for maximising synergies between EPZ and SEZ regimes should be exploited. By eliminating the restriction on domestic firms' participation, SEZs can potentially boost the possibilities of developing backward linkage capacities directly targeted towards the firms within the same premises. Greater interactions between local and foreign firms will give domestic enterprises better exposure to modern production techniques and management practices. One consideration could be to allow local firms to participate in three EPZs in north-west and south-west Bangladesh. Investment and export response from these establishments have been subdued so far, and opening them to local firms based on SEZs modalities could generate momentum in these lagging regions.

* Ensuring availability of skilled manpower would be a challenge for SEZs, particularly in relatively backward regions. The 7FYP has explicitly suggested supporting lagging regions with skill development, such as by establishing technical and vocational institutes. Implementation of this vision is extremely important. In addition, civic amenities, recreational facilities, and good housing and accommodation will be required to help skilled workers relocate.

* Assessing costs and benefits for any ambitious project like SEZs is important for learning lessons, introducing innovative policy designs and evaluating opportunity costs associated with alternative options. Cross-country studies suggest that, more often than not, economic zones produce much less than expected outcomes. Policy experiments to evaluate the likely impact of different types of investment projects, particularly for ensuring regional inclusivity, are also issues for consideration while assessing costs and benefits.

* Finally, there is a need for quality data on a regular-interval basis to analyse issues of regional disparities for developing suitable policy options. In the immediate term, it will be extremely helpful to develop a consistent data framework to capture district-level outcomes associated with incomes, social indicators, poverty incidences, and sectoral interlinkages. This will then allow policy experiments to study impact at the district level. Ideally, efforts should also be made to build at least a few sub-district-level (including some for lagging regions) analytical models, to be able to understand the differential effects of different policy options.

Special economic zones can be an important instrument for promoting inclusive growth and development. Simulation results show that without any targeted interventions most of the increased production activities will tend to concentrate in the relatively better-off regions given the current excessively skewed distribution of manufacturing production in favour of these regions. While the lagging districts still benefit from economywide linkages and increased demand for labour, a relatively higher proportion of output when generated from SEZs located in lagging region have stronger impact on poverty reduction and employment generation, including of women's. It also generates greater demand for labour from small farm, non-farm and lower-skilled households. These are the households that are more likely to be associated with vulnerable and excluded groups.

While SEZs can be an appealing policy tool for promoting regional development, and policy simulations can help understand the impact of different policy scenarios under ideal circumstances, there are several factors that must be taken into serious consideration to make it work effectively. There are valuable cross-country experiences and best practices that must also be carefully studied to derive lessons and consider appropriate policy measures.

Dr Mohammad A. Razzaque is an economist, who is also a Senior Fellow for International Trade and Globalisation at London School and Business and Management, and formerly Head of International Trade Policy at Commonwealth Secretariat, London, UK. Dr Bazlul H. Khondker is Professor of Economics at Dhaka University, and Dr M. Abu Eusuf is Professor of Development Studies at Dhaka University and Secretary General, Research and Policy Integration for Development (RAPID). For correspondence email:

This article is based on an analytical paper prepared earlier as part of a project initiated by the Overseas Development Institute (ODI), London, UK, with support from the Department for International Development - DFID of the Government of the UK.