Growth in national income in developing countries across the world for the last two decades has, in general, been poverty-reducing. The negative relationship between growth and poverty is well established in the literature. However, to what extent does growth help poor people come out of poverty is an area of a debate. There may be a critical level of growth or income after which growth cannot impact the poverty level anymore. The relationship is characterised by non-linearity and the initial and current level of inequality is believed to have an important role to play in the growth-poverty nexus. People living at the lower end of the income distribution fail to graduate due to lack of assets (physical, financial, social and human), low relative return of assets, greater exposure to shocks (originating from poorer health, natural disaster and personal insecurity) etc. That is, unless some critical level of physical and human capital is present, the poor cannot take part in the growth process. In the context of Bangladesh, geographical exclusion, ecological vulnerability and policy bias also contribute to the existence of the non-linearity in growth-poverty nexus. 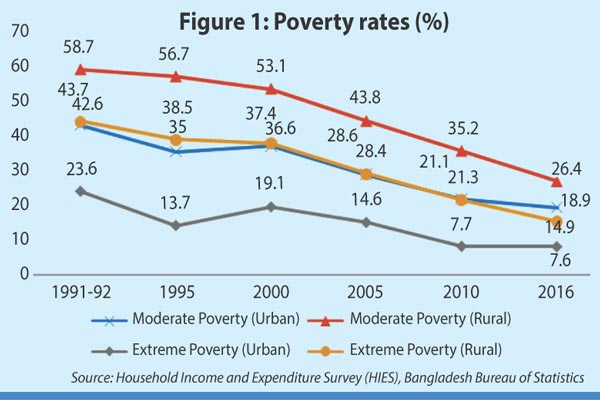 Bangladesh's rapid growth in recent years has been argued to be inclusive and pro-poor. Over the course of income growth, the country has achieved a rapid reduction in the rate of poverty. In last twenty five years, from 1991-92 to 2016, the proportion of population living in extreme poverty (i.e., below the lower poverty line) has dropped by two-thirds in both urban and rural areas, whereas the proportion of population living in moderate poverty (below the upper poverty line) has more than halved in both urban and rural areas (Figure 1). The rate of extreme poverty fell from 23.6 per cent to 7.6 per cent and from 43.7 per cent to 14.9 per cent, respectively in urban and rural areas during the 1991-92 to 2016 period. During the same period, the rate of moderate poverty fell from 42.6 per cent to 18.9 per cent and 58.7 per cent to 26.4 per cent, in urban and rural areas respectively. This rapid reduction in poverty can be attributed to the nature of growth that the country has experienced. Growth in two sectors, RMG export and remittance, have been the main engines of Bangladesh's income growth since the 1980s. These two sources of growth, due to their inclusive and pro-poor nature, are also believed to have been the drivers of poverty reduction. Less reliance on high skilled labour in these two sectors has created an income opportunity for the people coming mostly from the backward, disadvantaged and low income groups of the society. 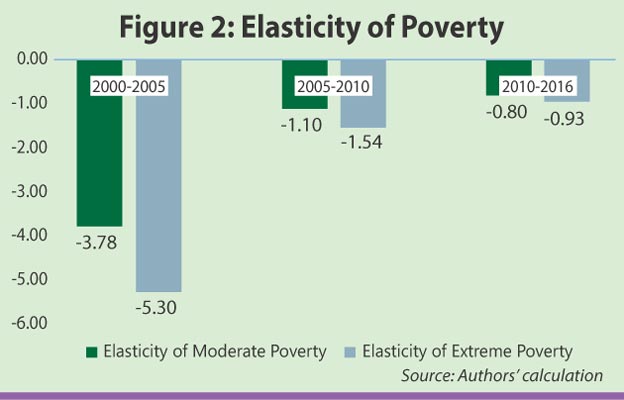 Despite remarkable success in poverty reduction since independence, still one in every four people lives below the upper poverty line income and one in every eight people lives below the lower poverty line income. In fact, the effectiveness of growth as a driver of poverty reduction has come into question in recent days. The elasticity of poverty with respect to income provides an estimate of the effectiveness of growth in reducing poverty. The absolute value of income elasticity of poverty ('elasticity of poverty' in short) has fallen very fast in recent years (Figure 2): from 3.78 during 1995-2000 to 0.80 during 2010-2016 in case of moderate poverty and from 5.3 during 1995-2000 to 0.93 during 2010-2016 in case of extreme poverty.

This drastic decline indicates that the role of growth in reducing both moderate and extreme poverty has become less and less effective over time- increasing the size of the pie does not ensure that all are getting a share of it. One important nature of the reduction in elasticity is that the elasticity of extreme poverty has fallen at a slower pace than that of the moderate poverty throughout the period of 2000 to 2016. In 2010-2016, absolute values of elasticity of extreme and moderate poverty were 0.93 and 0.80 respectively. It indicates that growth can still benefit the extreme poor. However, if this declining trend continues over the next few years, the linear projection of extreme poverty reduction to 4.15 by 2021, made in the 7th Five Year Plan, is unlikely to hold. The linear projection was based on the assumption that the real GDP would grow at a rate of 6.0 per cent and the net growth elasticity of poverty would remain constant at -2.05 over the projection period. Bangladesh may have reached that tipping point after which growth is less likely to impact poverty reduction.

The above discussion underpins the need for targeted safety net programmes, regional and social targeting and effective 'graduation models' for further reduction of poverty. While there are different safety net programmes in place implemented by different ministries and departments, evidences of leakages, mis-targeting, duplications and non-coordination among implementing bodies are galore. The government has prepared the National Social Security Strategy (NSSS) based on life cycle approach with emphasis on the most vulnerable sections of the population in its initial stage of implementation. The reduction of poverty, particularly the extreme poverty, critically hinges on the effective implementation of NSSS. This document also emphasises the importance of geographical targeting. It is argued that the understanding of the local level heterogeneity of the well-being of people and their potential causes has a significant bearing on designing effective and customised tools for interventions. The success of the geographical targeting critically hinges on the extent we can collect reliable information at the lowest possible administrative unit of a country.

While almost all developing countries run a variety of social safety net programmes to provide support to the poor in order to prevent them from slipping or falling into further poverty below a certain level, the scope of such interventions is very limited and does not take into account the long term impact, ensuring a permanent solution to the low level equilibrium of poverty trap. The evidence that temporary support to the poor is not enough to lift them out of poverty in the long-run has spawned a host of models, popularly known as 'graduation model', which includes a package of interventions aiming to upgrade the ability of the beneficiaries so that can maintain high income in the absence of the project. Though there has been a number of experiments with such graduation models in Bangladesh such as TUP (Targeting Ultra Poor), CLP (Char Livelihood Programme), SWAPNO (Strengthening Women's Ability for Productive New Opportunities), etc., there are differences in views among the practitioners and policy makers on the types and their optimal mix of ingredients in the package, its delivery mechanism and also length of interventions. The importance of such graduation model becomes more relevant as the role of growth in reducing poverty is diminished.