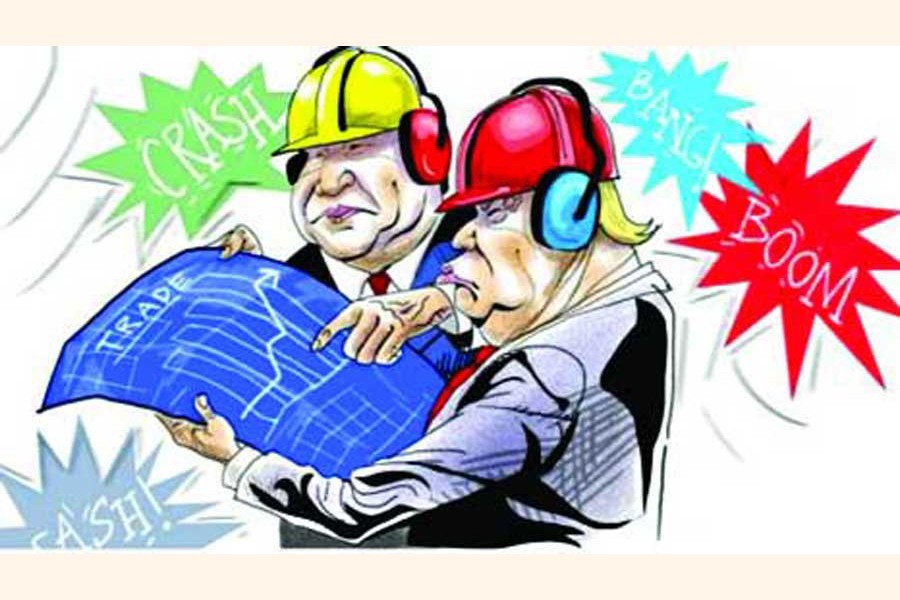 Bangladesh's export earnings declined by nearly 3.0 per cent in the first quarter of FY19, the largest first quarter decline in recent memory. Woven garments, knitwear, leather, home textiles, other manufactures and agricultural products all posted declines relative to the same period last year. Weak export work orders may continue in the months to come, according to industry leaders.

So much for the optimism on capturing trade diversion from the US-China tariff escalation. It may be a mistake to attribute this to a weak global economy. Yes, there is fear of a global recession. But there is no recession yet in Bangladesh's major export markets. Growth slowdown globally cannot explain why Bangladesh is falling short on capturing trade diverted from China due to US tariff escalation.

Take the case of Vietnam. U.S. trade data for the period since it imposed the first round of tariffs in mid-2018 show Vietnam has so far been among the big beneficiaries of the trade dispute. Its annual trade surplus with the U.S. had already been growing at a rapid pace, reaching $40 billion in 2018. It totalled $25.3 billion in the first six months of this year, 39 per cent higher than the same period last year, according to U.S. Census Bureau data. Vietnam's total exports increased by 9.0 per cent year-on-year in September 2019, slightly lower than the 10.4 per cent y-o-y increase in August. Vietnam is benefiting so much from the impasse that it, too, is at risk of being hit with punitive American duties.

Vietnam posted garment and textile export turnovers of over $30.4 billion in 2018, up 16.6 per cent from 2017. This may reach $40 billion in 2019, according to the Vietnam Textile and Apparel Association forecast, thus most likely overtaking Bangladesh. This despite the fact that Vietnam's minimum wages, ranging from as low as US$120 to US$170 per month (depending on the region), are much higher than the minimum wages in Bangladesh. Vietnamese producers, like those in Bangladesh, have to import much of their raw materials such as steel, fabric and chemicals.

What does Vietnam do different from Bangladesh? Some have suggested that this is because Vietnam offers much better policy support to the exporters. The precise form of policy support they have in mind appears to be cash subsidies linked to the dollar volume of exports.

Vietnam does not provide cash subsidies to exports. Being a developing country member of World Trade Organization's, Vietnam is not allowed to provide any subsidies directly linked to the volume of exports. Viet Nam provides support mainly in the form of tax incentives to encourage research and development; develop infrastructure of special importance; assist enterprises involved in education, training, and health care; and encourage the establishment of businesses in geographically disadvantaged areas.

Bangladesh provides cash export subsidies ranging from 2-20 per cent on export of 26 categories of products subject to local content requirements. From this year, garment export to the US, Europe and Canada are, for the first time, allowed 1.0 per cent of the earnings as subsidy, for which the government has allocated Tk 28.25 billion in the FY20 budget. Garment export already gets subsidies in four categories ranging from 2.0 to 4.0 per cent. In addition, Bangladesh provides a wide array of other support measures to exports such as concessional tariffs, a duty drawback system, special bonded warehouses, export processing zones (EPZs), and income tax rebates. Exporters can also avail concessional credit from banks at a 7.0 per cent rate of interest for the financing of pre-shipment requirements. All exporters benefit from an income tax exemption on half of the total income from the exports, provided that they do not avail any other tax incentives under any other scheme.

Instead of expanding the export subsidies, Bangladesh needs to prepare to phase them out as it will no longer be eligible for WTO's Special and Differential Treatment after graduating from the LDC status in 2024.

Bangladesh encourages investment through incentives to various sectors under many schemes. However, foreign investments require prior clearance on 17 controlled sectors and there are foreign ownership limitations on e-commerce ventures. Initiatives to improve the investment environment are ongoing, but yet far from the finish line.

The key point here is that differences in policy support cannot explain the asymmetry of benefit from trade diversion between Bangladesh and Vietnam. It may be more helpful to look at the differences in the initial competitiveness conditions. These differences suggest Vietnam's readiness to capture the resourcing of export orders and relocation of production from China was much stronger than Bangladesh. 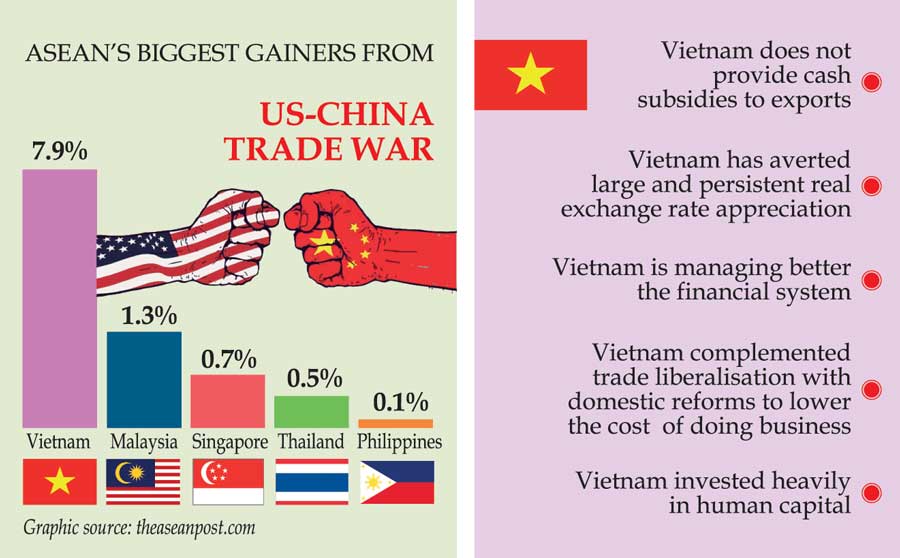 Below I argue that differences in the management of the exchange rate, financial system, trade, business regulation and investment in physical and human capital allowed Vietnam to capture the lion's share of orders resourcing and production relocation due to the tariff war.

Vietnam has averted large and persistent real exchange rate appreciation. Competitive real exchange rates are important given that the suppliers of similar products, for example, those in Association of South East Asian Nations (ASEAN), have allowed the exchange rates to move together with differential inflation rates. The Vietnamese Dong fell to its lowest level ever against the U.S. dollar in late April 2019.

Vietnam maintains a floating exchange rate peg. Under the current regime, the State Bank of Vietnam (SBV) manages the exchange rate with reference to a basket of currencies of major trading partners. The central exchange rate of Vietnamese dong to US dollars is set as a reference rate for commercial banks' transactions within a 3.0 per cent plus minus band. The SBV intervenes by selling and buying foreign currency in the foreign exchange market to mitigate unexpected currency volatility. The SBV also intervenes to support the macro-economic and monetary targets.

In Bangladesh, the de-jure exchange rate regime is floating, but Bangladesh Bank (BB) intervenes in the spot market to limit volatility and to supply foreign exchange to the market. Interventions in the foreign exchange market to keep the taka-dollar rate stable has eroded Bangladesh's price competitiveness. The Bangladesh Bank (BB) has in last two years used moral suasion and market intervention to target the nominal exchange rate against the US dollar (USD). It sold $2.31 billion in FY18, another $2.34 billion in FY19 and $89 million so far in FY20. This helped keep the inter-bank exchange nearly fixed at Tk 84.5 per USD in recent months and almost eliminated the difference between the interbank and the informal market exchange rates.

* With US dollar strengthening in the international markets and Bangladesh's key trading partners allowing their nominal exchange rate to depreciate against the US dollar, taka has appreciated against the Euro, the Pound, the Indian Rupees while it remained nearly stable against the Chinese Renminbi and the Japanese Yen. The Real Effective Exchange Rate (REER) appreciated by 5.8 per cent in FY19 relative to its level in June 2018. This more than reversed the 2.5 per cent REER depreciation in FY18. Consequently, the taka in real effective terms was 36.4 percent higher relative to its level in June 2013. The real appreciation of the taka is attributable to faster domestic inflation relative to inflation in Bangladesh's key trading partners as well as the nominal appreciation of the taka against other major trading partners' currencies.

* This loss of price competitiveness together with relatively low productivity levels has put Bangladesh at a competitive disadvantage. In addition, BB intervention in the foreign exchange market has reduced the foreign exchange reserves and drained liquidity from the money markets. Consequently, growth in credit to the private sector, already constrained by rising NPLs, weakened to a recent low.

* Vietnam is managing better the financial system. Much of the rapid credit growth in recent years has occurred through the banking system. The ratio of credit to GDP is driven by very high investment rates. The Return on Equity of Vietnamese banks was around 14.3 per cent on average in 2018. This compared well with other emerging markets at similar levels of development. The levels of NPLs used to be high, but there has been significant progress in resolving NPLs and recapitalising banks. NPLs currently are at 6.5 per cent, close to the 4.0-5.0 per cent average for emerging market economies. Banks have stepped up the resolution of legacy loans and aggressively bought back NPLs from the Vietnam Asset Management Corporation.

* Bangladesh's financial system is off track. The situation in the banking sector has been deteriorating despite strong growth. The NPL ratio has increased from 9.3 per cent at end-2017 to 11.7 per cent at the end-June 2019. The published NPL ratio underestimates potential problems in the banking sector. Loan rescheduling and restructuring has been growing. Total stressed advances, which include NPLs, restructured and rescheduled loans, exceed 20 per cent of total loans, according to the 2019 IMF Article IV report. The high level of stressed assets limits access to credit and loan recycling.

* Vietnam complemented trade liberalization with domestic reforms to lower the cost of doing business. Among them, market-oriented reforms covered the wide range of institutional changes to enhance ease of doing business and strengthen market competition. The functions of the government and public administration at all levels shifted progressively from direct interventions into indirect management, using legal and economic instruments. Vietnam jumped 10 places in the Global Competitiveness Index (GCI) rankings to 77th spot in 2018 and another 10 places to the 67th spot in 2019 rankings. It ranked 69 out of 190 countries in the Ease of Doing Business 2019.

Bangladesh also liberalized trade but not with the same gusto as Vietnam. Reforms to address the behind the border issues have lacked depth and persistence. Trade liberalization alone cannot be sufficient to trigger supply responses in terms of expanding export volumes and diversifying the economy. Lack of an enabling environment have inhibited entrepreneurship and innovation. Bangladesh faces several trade logistic constraints: inefficiencies at ports and related internal road transportation, cumbersome and opaque customs procedures, invisible costs of doing business and so on. Bangladesh ranked 105 out of 141 countries in the GCI 2019 and 176 in the Ease of Doing Business Indicators 2019.

* Vietnam invested heavily in human capital. Facing a rapidly growing population (97 million in 2018), half of whom are under 35, the government made large investments in education and infrastructure, ensuring cheap mass access to the internet. It ranked 48 out of 157 countries in the World Bank's Human Capital Index (HCI) 2018, second in ASEAN behind Singapore. A Vietnamese child born today will be 67 per cent productive when he/she grows up, provided he/she gets complete education and full health.

Bangladesh has lagged Asia and Latin America in expenditure on education and health. The tertiary education system is unable to deliver the skills needed in existing and emerging activities in manufacturing and services. Bangladesh ranked 106th among 157 countries in the World Bank's Human Capital Index 2018. A child born in Bangladesh today would reach only 48 per cent of his/her full potential unless they enjoyed complete education and full health.

One can go on. The point for the policy makers is to be careful in responding to demands for policy support (usually meaning cash handouts from the public purse) when a turbulence hits the economy. The demand is often justified by citing opportunistically examples that may or may not have contributed to solving the problem at hand in other countries. The focus must be on maintaining a competitive exchange rate, the accelerated implementation of structural reforms, and investing in human capital, not irreversible subsidies that add to the fiscal burden without addressing the root causes.

The author is an economist.