Rural development has varied dimensions, orientations and approaches. It also varies from country to country and from time to time. Rural development is often defined as the overall balance and proportionate wellbeing of rural people. How it works and the approach it takes, is determined and influenced by many factors.

The basis of rural development was set up when V-Aid (Village Agriculture and Industrial Development) Academy was set up in 1956 at Kotbari in Comilla. It aimed at coordinating total resources of the government and the people for a concerted effort to reconstruct village life. Dr. Akhter Hameed Khan (a retired ICS officer) was the head of the Academy. Under his leadership, the Bangladesh Academy for Rural Development (BARD) sprang to life in 1959, which is popularly known as the Comilla Academy. The Academy took up a set of pilot projects, integrated in one package, which is widely known as the 'Comilla Model'. The four main components were: Thana Training and Development Centre (TTDC), Rural Works Programme (RWP), Thana Irrigation Programme (TIP) and a Two-tier Cooperative System (KSS) in every thana (now Upazila). These four components were replicated nationwide. 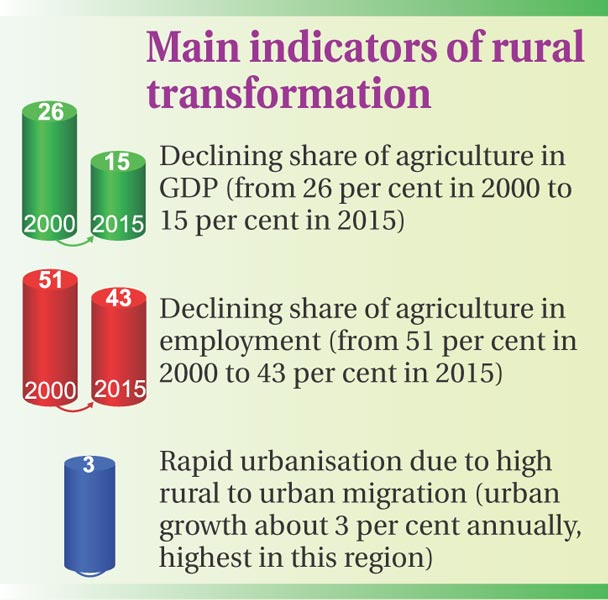 The government at that time was concerned with rapid agricultural development through the use of improved varieties of seeds, fertilisers, patricides, irrigation facilities and modern agricultural practices. Against the backdrop of experiences gained in these areas in the Comilla Model, the government initiated the Integrated Rural Development Programme (IRDP) in 1970. The government established the Bangladesh Rural Development Board (BRDB) to implement mainly TTDC and KSS components, while the Bangladesh Agricultural Development Corporation (BADC) and the Local Government Engineering Bureau (LGEB), now LGED, was set up for TIP and RWP respectively. In the early eighties, supply of irrigation equipment, fertiliser and other inputs were privatised and so BADC was abolished. IRD concept was introduced in various other countries with the initiative of the UN-FAO and to promote this approach CIRDAP was set up in 1979 as a follow-up to the World Conference on Agrarian Reform and Rural Development (WCARRD) held in Rome in 1979.

In Bangladesh, in the early seventies the problem of desperate poverty caught the attention of successive governments and elaborate programs were chalked out to tackle the problem. Successive five-year development plans dealt with the issue extensively and suggested various measures for implementation. The scheme for intervention in the First Five Year Plan (FFYP, 1973-78) presented several objectives while the emphasis on poverty alleviation was the foremost. It envisaged both production and institutional programme for development. It visualised a need for restructuring institutions to meet the problems of organisation of rural people, utilisation of resources and development of local planning system.

The rural development strategy of the government of Bangladesh has laid emphasis on (a) production and employment programme for the rural poor, (b) development of physical infrastructure including rural roads and markets identified as growth centres and (c) irrigated agriculture drainage and minor flood control work, (d) development of fishery, livestock, poultry, and other non-crop agricultural products, and (e) promotion of non-farm employment opportunities.

Features of transformation: Although the country's policy framework recognises the multi-dimensional character of poverty, the official measurement of poverty uses the income or expenditure dimension. Since independence, Bangladesh has made considerable progress in reducing poverty. The incidence of poverty (i.e. the share of population living below the poverty line) declined from more than 80 per cent in the early 1970s to 31.5 per cent in 2010 (BBS 2011). In 2015, the poverty rate is estimated at 24.8 per cent while the extreme poverty rate is 12.9 per cent. But there has been a fall in the annual average rate of poverty reduction, it fell from 1.7 per cent during 2005-10 period to 1.2 per cent during 2010-16 period. These improvements are likely to be the impact of relatively high economic growth in recent years. Nevertheless, poverty remains a key challenge in Bangladesh as the overall incidence of poverty persists at a high level.

In Bangladesh, comprehensive rural development efforts have centred around four major aspects: (a) institutional development and structural change; (b) production activities in the fields such as agriculture, fisheries, livestock, cottage and small industries; (c) non-agricultural components, such as education, health, family planning and housing; and (d) target group approach especially geared to the poor and disadvantaged people. 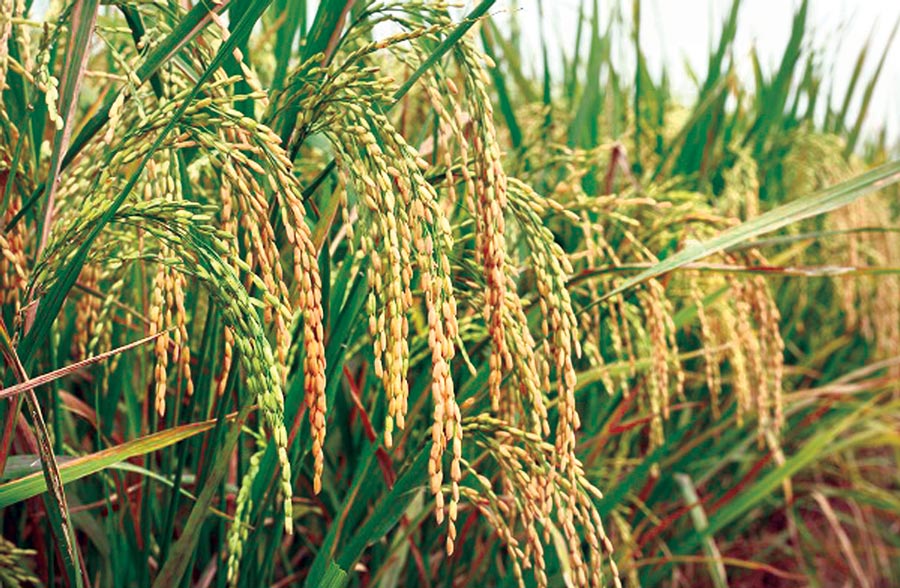 * Creating job opportunities for the large pool of under-employed and new labour force entrants by increasing the share of employment in the industrial sector from 15 per cent to 20 per cent.

* Adoption of a broad-based strategy of inclusiveness with a view to empowering every citizen to fully participate in and benefit from the development process.

* Pursuit of a sustainable development pathway that is resilient to disaster and climate change, entails sustainable use of natural resources, and sustainably manages the urbanisation transition.

Along with the government, NGOs have emerged as one of the most effective institutions in poverty alleviation interventions in the country. Starting with their relief and rehabilitation role after independence in 1971, NGOs have vastly expanded their programmes and proved to become effective change agents in the society. These organisations now form an integral part of the institutional structure for addressing poverty alleviation as well as rural development, gender equality, environment protection, disaster management, human rights and other social issues.

In order to support social and economic empowerment of the poor, along with a rapid increase in the number, their range of activities have also widened to include group formation, microcredit, formal and non-formal education, training, health and nutrition, maternal and child health, family planning and welfare, women's development, agriculture, fisheries, forestry, poultry and livestock, environment, water supply and sanitation, advocacy, human rights, legal aid, land and asset distribution and other areas.

The production performance of the agricultural sector in Bangladesh, particularly the crop sector, has considerable bearing on the rate and structure of poverty and malnutrition, the trade balance and the government fiscal position, and consequently on the rate of growth of the Bangladesh economy as a whole. The government of Bangladesh has, therefore, initiated various agricultural programmes to boost crop production, particularly food grain production, since the late sixties. The strategy for increasing cereal production over the years has emphasised the adoption of a package programme of 'seed-water-fertiliser' technology for rapid transformation of the crop sector.

Sustainability of programmes for rural transformation: The economy of Bangladesh has shown its remarkable resilience in supporting livelihood of a vast population of more than 160 million in a small land mass. It has achieved continued high growth for successive two decades. The country has attained the position in "lower middle income group" (World Bank categorisation) from "lower income group" and also on its way to be a "developing country" (UN categorisation) from "least developed country" due to structural transformation, though at a slower pace than others.

The rural sector of the country, in fact, has undergone through a higher pace of structural transformation reflected in:

(c) rapid urbanisation due to high rural to urban migration (urban growth about 3 per cent annually, highest in this region)

The question of sustainability may arise from different angles. One is the macroeconomic sustainability, which may be related to the cost of operation. The recent question is, can the society generate and spend the money and resources necessary to continue the direct and targeted poverty alleviation programmes (PAPs)? If that is accepted, should the government allocate more resources for PAPs at least in the short to medium run?

The other questions relating to sustainability refer to the micro level issue of weaning the programme members (off external help) so that they may run their own affairs. There appears to be considerable doubt on that point. In some cases, programmes have been running for many years and we have seen full benefits have not been reaped yet. Even then there is limited evidence that duration of membership positively influences the quantum of benefit, in the long run the capability of the poor will very probably increase if the PAPs are run for quite some years.

Ensuring sustainability of interventions: The experiences seem suggest that rural development and poverty alleviating projects which are simultaneously highly successful in terms of employment and income generation and have positive distributional benefits from asset creation in the long run, are few in number. Interventions through different institutions must be interlinked for balanced national development. Therefore, income generation project (IGPs); employment generation schemes (EGS); public provision of health, education and housing facilities, rural public works and food for works; and social security measures for the rural poor should be simultaneously geared towards successful rural transformation.

Four major aspects should be considered:

(i) Rural development should be attempted with a balanced overall development strategy. Therefore, programme interventions must fit the overall scenery to and macro policies of the country.

(iii) Rural development efforts necessitate close interaction and collaboration of four major parties: the government, private sector, the donors/international organisations and the voluntary organisations /NGOs. An overloaded bureaucracy of the government and fragile NGOs competing with each other or working separately will not be beneficial for the country.

There is an increasing awareness now among the government, NGOs and donors to put more emphasis on operation, maintenance and sustainability of projects, which hitherto have not been in the priority areas of government and NGOs towards poverty alleviation and rural development.

Conclusion: Poverty alleviation and rural development, which form important components of the development programmes of Bangladesh, are inextricably intertwined with numerous other activities-economic, political and social - within the national boundaries and beyond. Lessons drawn from experiences, especially from micro interventions, will go a long way in forging new national strategies of rural transformation. The micro level grassroots experiments demonstrate possibilities for a new sustainable accumulation process, both in the formal and informal sectors of the rural areas. Many of these experiments confirm how human development and equity go hand in hand with the accumulation process.

What is required is both a perspective and elements in different strategic options and settings for rural transformation, which go beyond charity, paternalism, delivery of fragmented inputs to the rural people in a top down fashion. Irrespective of whether rural transformation process takes place as a result of spontaneous activities of the poor or supported by a government agency, a bank, a private agency or NGOs, or whether they emerge with a particular 'entry' point, the process as a whole must be rigorously and regularly monitored and evaluated for future guidance of the policy makers, development partners as well as implementers of programmes and projects.

Two more issues are to be noted. Firstly, rural-urban divide is now withering away towards rural-urban continuum necessitating policy focus on transport networks and land-use planning.

Secondly, since agricultural practices are undergoing modernisation, there is a need for widening and deepening the linkage between agricultural products and agro-processing industries.

Finally, the strategies for agriculture and rural transformation should consist of increasing agricultural productivity and product diversification and encouraging private initiatives for value addition in line with climate change adaptation approaches. The government should devote more resources for agricultural research and extension.