One of the major areas of Bangladesh economy where success of policy intervention is yet to be effective is attracting the foreign direct investment (FDI). A series of policy supports including generous tax benefits and a smooth system of profit repatriation make Bangladesh one of the FDI-friendly countries in the world, at least in paper. Nevertheless, inflow of FDI in the country is quite low which is best reflected in the ratio of FDI compared to the Gross Domestic Products (GDP). The FDI-GDP ratio in Bangladesh is still below 2.0 per cent. In the latest count, the country received US$2.58 billion as net FDI in the past fiscal year (FY18), recording 5.11 per cent growth over $2.45 billion in the previous fiscal year.

Besides providing the national treatment to the foreign investors, Bangladesh also relaxed rules and regulations on foreign investment. A number of procedures and institutional process, required to start a venture, have also been simplified or deregulated. Currently, all but four sectors (arms and ammunition and other defence equipment and machinery; forest plantation and mechanised extraction within the bounds of reserved forests; production of nuclear energy; and security printing and mining) are open to both domestic and foreign private investments in Bangladesh. 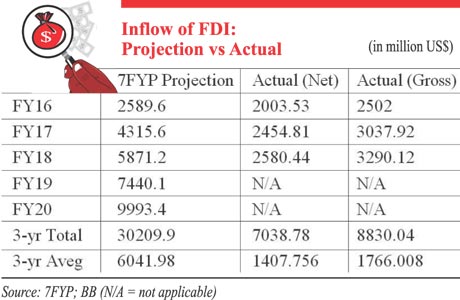 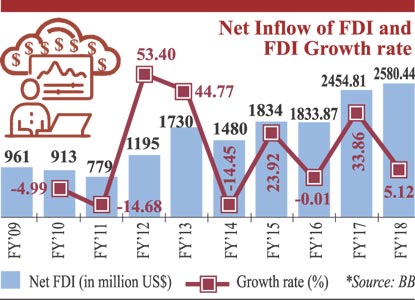 No doubt FDI brings in the much-needed external funds for recurrent investment, but it also creates long-term debt obligation in the mode of future repatriation of profits generated by the foreign investors. Thus FDI is not a universal tool to stimulate economic development, but definitely an important instrument to support economic growth. Bangladesh is, however, yet to test the validity of the proposition as the country has started to see a better inflow of FDI only in the recent years.

Lag behind expectation: Attracting a higher amount of FDI is a priority of the incumbent government. The Seventh Five-Year Plan (7FYP) argues that FDI is not only an important source of financing but more importantly it is an excellent source of importing technology and modern management, critical instruments for improving total factor productivity. The document also acknowledges the higher cost of doing business in the country and mentions that the flow of FDI is very competitive and highly sensitive to the investment climate as well as social stability of a country.

"As such the performance standards required to attract FDI are higher than for domestic private investment," it says. "The latter also has better connectivity with the political elements and is able to often bypass constraints that are not possible for FDI." In this connection, the medium-term development planning document stresses improving the investment climate with rigorous actions including further deregulation, financial sector, tax and legal reforms and overall better governance.

In fact, the 7FYP relies significantly on FDI to finance the required investment during the plan period. Though only around 10 per cent of the investment is planned to be generated from external sources, half the external resource needs to come as FDI. Thus the 7FYP projects an ambitious target of attracting FDI in the country, increasing it substantially to $9.60 billion annually by FY20. It also projects to increase FDI-GDP ratio to 3.0 per cent by the end of FY20. It is to be noted that during the 6FYP period of 2011-2015, the annual inflow of the FDI posted 17.20 per cent growth on an average. Moreover, the FDI-GDP ratio stood at 0.9 per cent in the terminal year or FY15.

Thus, one thing is clear. The country will not be able to reach even closer to the expected amount of FDI by the end of FY20. Against the projected amount of $24.48 billion in total in the five years, the actual amount may stand at $16.0 billion at best.

The 7FYP considers FDI as a major source to support the country's balance of payments (BoP), especially when the flow of foreign assistance is likely to decline. The full-fledged graduation from the status of Least Developed Country (LDC) by 2027 will also make the external financing costly. Bangladesh has already started to feel the heat as international financial institutions are now charging more for giving loans. Again, private commercial borrowing is also on the rise and likely to create a long-term foreign debt burden. So, it is the FDI which may bring some relief if attracted rightly.

Bangladesh Bank is currently responsible to furnish the FDI-related data with periodic revision in line with globally adopted practice. It was in 2016, when the central bank started to calculate the net inflow of FDI as per the guideline set in the sixth edition of the Balance of Payments (BoP) and International Investment Position Manual (BPM6) of the International Monetary Fund (IMF). To comply with the BPM6, the central bank adjusted FDI data since FY14. Revision or recalculation of net FDI data for FY13 and the previous years was not possible as there were no sufficient statistics required for the computing.

In doing the recalculation and readjustment, Bangladesh Bank faced some difficulties and those are reflected in FDI data. Time and again, data was revised to accommodate the changes in the calculation method. Before explaining the matter, it is important to understand the FDI data estimation practice in the country.

Bangladesh Bank estimates and finalises FDI-related data on the basis of enterprise survey. The half-yearly survey started in FY05 when the central bank also updated the method of calculating the BoP data. Since 2014, this survey has been being conducted a quarterly-basis. The survey covers fully foreign-owned companies and joint-venture companies operating in the country. A predesigned survey questionnaire is used to collect data from FDI-enterprises situated both in Export Processing Zone (EPZ) and Non-EPZ areas. Data generated from the survey findings is finally adjusted with the annual data of BoP. That's why the provisional BoP data on FDI differs significantly with the final estimate.

The components of FDI inflow in Bangladesh also deserve a review. It is the reinvested earnings of the existing Multinational Entities (MNEs) which contribute almost half the FDI inflows. During the last seven years (FY12-FY18), the total amount of net FDI stood at $13.27 billion, of which $6.78 billion came as reinvested earnings. It is actually the amount of profit retained for reinvestment. At the same time, $4.10 billion came as equity capital which is generally known as the foreign direct investor's purchase of shares of an enterprise in a country other than its own. To put it in the other word, it is the component of FDI which is also considered as fresh equity. The remaining amount worth $2.39 billion came as intra-company loans which mean short or long term borrowing and lending of funds between direct investors (parent enterprises) and affiliate enterprises.

Another aspect of FDI in Bangladesh is foreign investments inside and outside the Export Processing Zones (EPZ). Inflow of FDI is highly concentrated in non-EPZ areas which account for around 80 per cent of FDI. During the last seven years, the net FDI worth $10.70 billion came in non-EPZ areas while EPZs received FDI worth $2.59 billion.

Looking into the country-wise inflow, it is the United States of America (USA) from where Bangladesh received the highest amount of FDI so far. The stock of the US FDI at the end of FY18 reached $3.57 billion while the gross stock stood at $15.79 billion.

In sector-wise FDI, the gas and petroleum sector attracted the highest amount of foreign investment followed by textile and wearing, banking, power and telecommunication.

Near-term outlook: The near future or near-term outlook of FDI is still not rosy globally. The Investment Trend Monitor (ITM), prepared and released by the United Nations Conference on Trade and Development (UNCTAD) recently, showed that global FDI dropped by 41 per cent in the first-half (January-June) of the ongoing year or 2018. Though it is difficult to predict whether the trend will be reversed in the second-half of the current year, UNCTAD hinted that overall FDI in the current year might face a sluggish trend and drop for the third consecutive year. In 2017, global FDI dropped by 23 per cent to $1.43 trillion from $1.87 trillion in 2016. Again, total inflow of FDI globally in 2016 dropped two per cent from $1.92 trillion in 2015.

The current decline in global FDI is mainly due to a sharp decline in the developed economies where it dropped by 69 per cent. A big repatriation by the multinational entities based in the United States (US) is a major driver of the declining trend.

The global trend has very little to do with Bangladesh. For instance, the net inflow of FDI in the country jumped by around 44 per cent in the first half of 2018 against the global decline. The internal factors matter more in Bangladesh regarding FDI. As the national election is approaching, it is presumable that fresh foreign investments will not gain any momentum now. Even the post-poll period may show some sluggishness in FDI. Nevertheless, the country's overall socio-economic infrastructure and business climate are major determinants of FDI. The one-step decline in the global competitiveness index shows that Bangladesh is struggling hard to improve the investment-friendly environment.

The writer is Planning Editor at the FE.