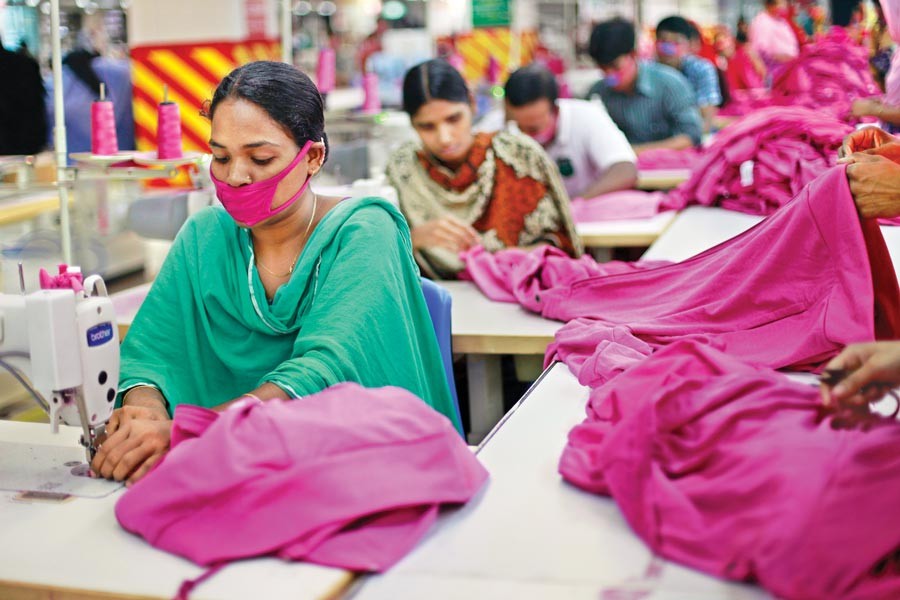 Female workers at an RMG factory in Dhaka — FE photo

Though export earnings from the country's readymade garment sector have been increasing over the decades with capacity expansion, the health and workplace positions of women workers, who constitute the majority, are not improving at the same pace.

The sector has created employment for some 4.0 million workers mostly women.

There is no denying the fact that work at a garment factory has brought financial capability for the women who were once forced to work house hold chores at their respective houses or as domestic helps.

The garment factory work also enables them to play a strong role in family decisions like marriage, having child, education of their children and so on.

The health situation of the garment workers has been revealed in a recent survey conducted by International Centre for Diarrhoeal Disease Research, Bangladesh (ICDDRB), an international health research organisation located in Dhaka.

The survey titled 'Improvement in anemia status of female readymade garment industry workers in Bangladesh: Evidence from a programme evaluation' revealed that eight out of 10 female garment workers, aged between 18 and 49, are anemic.

ICDDRB's 10 month-long survey was conducted on some 2,600 garment workers from four garment factories located in Dhaka and Mymensingh.

The survey findings revealed that anemia hampers physical and mental performance, immunity and productivity of garment workers and it has an impact on social and economic development.

It showed that anemia can be successfully reduced by a combination of intervention for at least 10 months including diversified lunch with fortified rice, weekly iron and folic acid supplement and health and nutrition messages.

There are many ongoing activities to improve the workplace safety in the RMG sector. Global buyers, retailers and trade unions jointly launched safety inspection programmes under the name of Accord and Alliance.

The two western retailers' platforms have inspected fire, electrical and structural integrity of some 2200 garment factories while another 1500 factories have been assessed by a joint initiative led by the government and the International Labour Organisation.

More than 85 per cent post inspection safety hazards have been, recorded fixed in listed garment factories under the retailers platform.

Workers' rights issues have been given priority in recent times and the government has announced a 51 per cent hike in the minimum monthly wage for the entry level garment workers to Tk 8,000 from the existing Tk 5,300.

Rights groups argued that the hike is not sufficient for garment workers to lead a decent life and the low wage is also responsible for malnutrition of garment workers.

Moreover, the long hours of work put a negative impact on workers' health.

Another study revealed that a garment worker on an average works 12 hours a day including the overtime. Almost all workers do overtime as this offers double payment for per hour compared with the regular hour.

Apart from the poor health situation, the female garment workers are deprived of supervisory positions in their respective workplaces.

The issue was highlighted in a book published recently by a renowned factory executive director.

The author, in his book, showed that the minimum wage gazette guides the sector to determine workers' wage structure. The gazette also creates confusion and accelerates deprivation as it allows the factory management to decide the grades according to their wish.

The wage structure has many loopholes. An RMG factory has many posts and positions to run which are not mentioned in the gazette as all the focus has been given to the entry level workers. This is mainly because of the attention from different arena.

There are no guidelines on how to measure workers' competency for a particular grade and for how long a worker will be retained in the same grade. These loopholes are helping the employers to manipulate in determining workers' grade.

The author, in his book, also revealed some findings of a survey. With the significant majority, the females are not in supervisory and decision making positions. Out of total respondents 4.71 per cent supervisors and only one manager out of total 98 managers are female.

Some other surveys also revealed the same poor situation of female workers in supervisory position.

Though in recent years, the share of female employment in upper and middle grades is slowly rising, especially in case of grade III, grade IV and grade V, their presence in top grades such as grade I and grade II is scanty.

The sewing and finishing sections are still dominated by women with more than 74 and 58 per cent presence.

There is also a common perception that female workers are less knowledgeable about operating different modern machines compared to their male counterparts.

There is also allegation that most of the management/factory authority does not take initiative to upgrade women to upper positions.

The writer is a Senior Reporter at FE.