Bangladesh has become a hotspot for China's outbound investment as the world's second largest economy is set to become the biggest FDI (foreign direct investment) contributor to the South Asian economy.

As of June-end, 2018, the USA (United States of America) accounted for a majority part of the FDI stock in Bangladesh. The way China is expanding its trade and business, it is very likely that the giant panda is soon going to overtake the USA's position in the Royal Bengal Tiger's territory.

According to the Bangladesh Bank statistics, the USA tops the list of FDI stock with around US$3.58 billion. On the other hand, China holds the 6th position on the list with investments worth US$892 million. But the official figure doesn't represent the actual scenario because many Chinese investments come to Bangladesh via Hong Kong, Singapore and even the US. 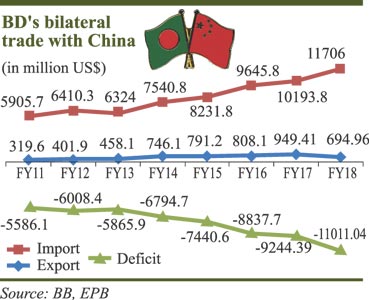 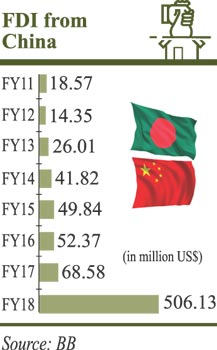 China might eventually become the largest source of FDI for Bangladesh due to the large Chinese investments that are due to come in the power and infrastructure sectors. One Chinese company is going to invest around US$2.0 billion in the coal-based mega-power plant at Payra in the coastal part of Bangladesh and the deal was signed during the BRF (Belt and Road Forum) held in Beijing in 2017. At the same time, Chinese companies are also in a race with some other global firms to secure the contract for building an onshore LNG (liquefied natural gas) terminal in the country.

The Chinese steel giant Kunming Iron and Steel Holding Company (KISC) already signed an agreement worth US$ 2.3 billion with the Bangladesh Economic Zones Authority (BEZA) to set up its production base in an economic zone in Bangladesh.

Why Chinese investment is flowing there

Three major factors that drove a large volume of Chinese investment to the developing country are availability of cheap labour, a strong market base with untapped business opportunities and possibility of getting high return. China will continue to move away from labour-intensive low-tech industries owing to its rising labour costs and cooling markets. It will gradually move towards high-margin and high-end manufacturing like IT (Information Technology), aerospace and telecommunication. Existing Chinese companies, producing low-end labour-intensive products will be looking for places with cheap labour to relocate their plants. Bangladesh is the perfect place for them as Bangladeshi workers are among the worst-paid in the world. In terms of availability of labour force, the country is fully blessed with its demographic dividend, because over 65 per cent of its population are of working age (15 years to 60 years) while over 30 per cent are aged between 15 years and 35 years. At the same time, the world is a market-based economy. Bangladesh lying beside the Bay of Bengal is a big market of over 160 million populations where most of the potentials like connectivity, energy and mineral resources still remain untapped. On the other hand, the Bangladesh government comes up with a bunch of offers for the overseas investors, Chinese in particular. For example, one special economic zone is being built for the Chinese entrepreneurs while tax holiday and other fiscal benefits are provided for them. So, availability of cheap labour coupled with the untapped business scope and special treatment from the state always ensure high return from the investment and allay the fear of higher production costs and that's the reason behind the rush of Chinese outbound investments to Bangladesh.

The geographical location is another key attraction for investors. The Chinese economy is also heavily dependent on energy resources transported via the secure sea-lanes in the Indian Ocean.

A major chunk of China's energy import from the Middle East passes through the Strait of Malacca, which is a narrow stretch of water connecting the Indian Ocean and the Pacific Ocean. China's ever increasing need for energy has increased the strategic importance of this maritime region and the importance of maintaining good relations with littoral states in and around the region.

Bangladesh is centrally situated along the Bangladesh-China-India-Myanmar (BCIM) Economic Corridor and retains a strategic position along the 21st century Maritime Silk Road with the Chattogram port as a major maritime pivot through the Indian Ocean, a very important factor for realisation of both the Economic Belt and Maritime Road initiatives.

Why China is important for Bangladesh

Bangladesh's economy grows fast but it could not properly reap its potentials due to some key factors. Infrastructural deficits and creating jobs for its available huge labour force are the two major challenges which also put the nation in the trap of middle income country. Sustainable growth and attaining the government's target of becoming a developed country by 2041 largely depends on how fast the country overcomes these bottlenecks. Poor infrastructure has slowed down the growth of industrialisation, increasing the rate of unemployment, disturbing industrial production and enhancing production costs thus hampering the government's initiative to lift people out of the vicious cycle of poverty. Infrastructure means roads, bridges, railways and energy sources. It is a globally-accepted theory that improved infrastructure leads to more inflow of local and overseas investments, more investment results in more jobs and more employment ensures decent living, which is in fact the ultimate target of the present government of Bangladesh.

Bangladesh's economy is dependent on manufacturing and agriculture sectors but the shortage of skilled labour force prevented the country from making the best use of the potentials. The deficit can easily be overcome through application of the latest technology and China is the world's largest manufacturing base and a key source of modern technology. For example, the RMG (readymade garment) sector is the biggest in Bangladesh and it is the globe's second largest apparel exporter after China. The industry earned nearly US$30.61 billion in the fiscal year (FY) 2017-18. The manufacturers made a projection of earning $50 billion by 2021 when the country will celebrate 50 years of independence. But the industry suffers a 25 per cent shortage of skilled workers which is posing a main problem with achieving the goal.

So, in attracting a large number of Chinese investors in various sectors Bangladesh can learn their best practices and apply those to have the maximum industrial and agricultural outputs.

Bangladesh-China bilateral trade has been increasing significantly over the years, both in terms of the absolute amount and percentage involving Bangladesh's top trade partners. As per the statistics of the Export Promotion Bureau (EPB) of Bangladesh, the country's total merchandise export to China was US$ 1.0 billion against only $319.66 million in 2010-11.

On the other hand, the merchandise imports from China have been the highest for quite some time. The extrapolated data of Bangladesh Bank (BB) show that import from China was worth over US$10 billion in 2015-16, against $5.9 billion in 2010-11.

Bangladesh mainly imports raw materials for its textiles and clothing from China, such as cotton, yarn, fabrics, staple fibres and accessories for its readymade garment (RMG) industry, which is nearly 35 per cent of total imports.

The ballooning trade gap between the countries is an area of serious concern for Bangladesh. Though Bangladesh was given duty-free access for a large number of products by Beijing, its export to China has just exceeded $1.0 billion because most of the products are the minor ones in the export basket. For the last several years, Bangladesh has been fighting to convince its counterpart to include around 20 main major Bangladeshi items in the list. Beijing should be flexible about the demand.

At the same time, many promises were made, many agreements were signed to take the trade ties further ahead. Now time has come to implement those promises and deals, letting people get the maximum benefits of the friendship. For example, a deal was signed during the Chinese President's Dhaka visit to build a railway track alongside of the country's largest under-construction infrastructural project called Padma Bridge. But since then, no visible progress has been made as far as the release of investment is concerned. There also remains enough doubt about timely execution of the key development work on the infrastructure over the country's largest river Padma. The bridge will connect southern part of Bangladesh with the capital.

Protectionism seems to be on the rise due to some recent developments. For example, Britain has come out from the European Union. Tension is also mounting in Scotland while the USA pulled out of TPP (Trans-Pacific Partnership). Is it the right path for development? It could be a right decision for them but certainly not for the lower and middle income countries, because they need to shake hands to move forward together. We should not forget that it is the world of globalisation; we have to be well connected with each other in every area for mutual benefits.

The writer is a Senior Reporter at FE.