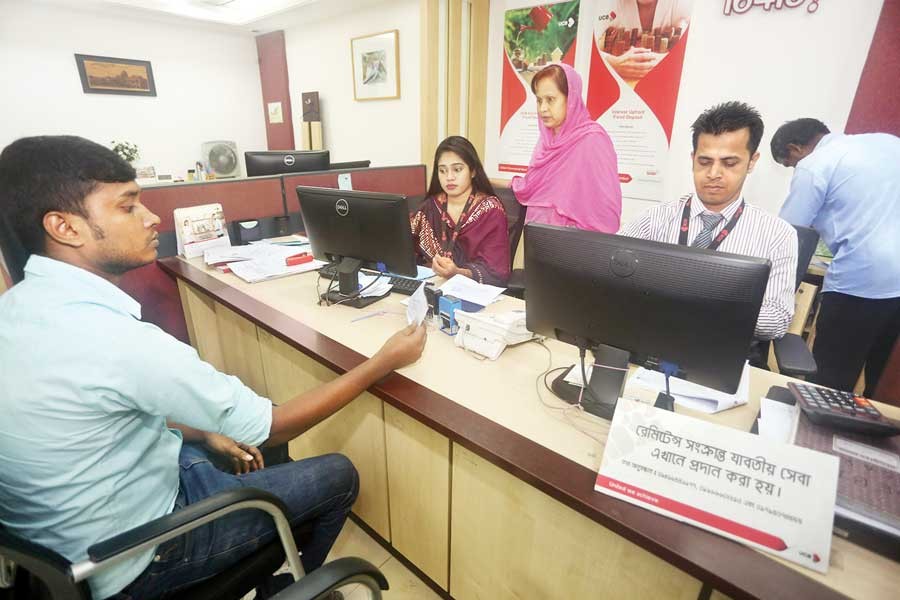 Officials at a bank man a desk serving their customers

Once derided as a basket case, today Bangladesh is the second-fastest growing economy in the world, with economic growth exceeding 8.0 per cent. The country has been tremendously successful in achieving a consistently higher economic growth rate since the 1980s. The average economic growth rate was 2-3 per cent during the 1970s right after independence. The rate rose to 3.5 per cent in the 80s and accelerated to 4.5 to 5.0 per cent during the 1990s. Economic growth has averaged 6.0 per cent or higher over the last decade, reaching 8.13 per cent in fiscal year 2019. This growth was possible due to a substantial decline in poverty, an increase in employment, greater and better access to health, sanitation and education and better basic infrastructure. As a result, the once-impoverished nation is now considered a middle-income economy and is set to achieve the developing country status.

Bangladesh's remarkable growth was accompanied by a decreasing inflation rate, increasing foreign reserves and per capita growth both in nominal and PPP terms, less reliance on foreign aid and grant and decline in extreme poverty. The proportion of population living below the upper poverty line more than halved between 1990 and 2018. According to World Bank, poverty rate went down from 82 per cent in 1972 to less than 9.0 per cent in 2018. However, these poverty percentages do not portray the distance of the poor households from the poverty line. This is captured by the depth and severity of poverty measured by poverty gap and squared poverty gap respectively. Both these matrices have declined significantly over the last decade. However, natural disasters, environmental hazards and the ever-increasing population growth are posing serious threat to our attempt to eradicate extreme poverty from the rural area. Some other socio-economic indicators are crucial to explore to design the policy prescriptions for Bangladesh's future sustainable growth. One is the GINI coefficient, which depicts the income inequality in a country. A GINI coefficient of 0 means an economy has no income inequality, and so income is distributed evenly across the society. Therefore, if the ratio is lower it is better. The latest survey by Bangladesh Bureau of Statistics revealed that our income inequality increased to 0.48 from 0.45 in 2010. Here, even a small decimal place value change leads to a significant impact on economic health. So, it seems that although extreme poverty is decreasing, the rate of poverty decline is much lower than that of increase in the number of rich and ultra-wealthy. This further sheds light on the question if Bangladesh is adequately spreading the benefits of its high economic growth rate across the society. If the answer is "No", then it is going to impact the sustainability of our development big time.

Another important socio-economic indicator is Human Development Index, or HDI, which is a composite index that takes into account three basic dimensions of human development on a long-term basis. These three dimensions are- long and healthy life, access to education and decent living standard. Long and healthy life is measured by life expectancy, access to education is measured by the mean year of schooling of the population over 25 years of age and expected number of schooling for children ready for the elementary schooling, and finally, standard of living is represented by Gross National Income, or GNI, per capita on Purchasing Power Parity, or PPP, basis. A country is ranked better with a higher lifespan, higher education and higher per capita income of its population. Child mortality rate fell gradually from 224.1 deaths per 1,000 live births in 1969 to 30.2 deaths per 1,000 live births in 2018. Adequate nutrition intake among young children in rural area was another challenge for us. Many past studies across the globe showed that there is a very strong positive correlation between malnutrition and poverty trap. In 2017, 36.2 per cent of children was stunted, 15 per cent was wasted and 33 per cent was underweight. The prevalence of stunting and underweight is lowest amongst children aged 0-6 months and highest at the age of 18 to 23 months. The level of underweight has declined from 65 per cent to 36 per cent between 1991 and 2017. So, the achievement so far is good, but the future actions need to keep on track to overcome the poverty trap among the extreme poor. Otherwise, high income inequality will always be there, and it will hinder our development as a whole. Between 1990 and 2017, Bangladesh's life expectancy at birth increased by 14.4 years, mean years of schooling increased by 3.0 years and expected years of schooling increased by 5.8 years.

Bangladesh's GNI per capita increased by about 178.6 per cent between 1990 and 2017. As a result, our HDI index is on an increasing trend. However, if this HDI number is adjusted for income inequality, the HDI falls from 0.608 to 0.462. This loss of 24.1 per cent is due to income inequality, and it can be seen how this one dimension is eating up the hard-earned benefits of high economic growth gradually.

Ease of doing business is the most vital indicator when it comes to local investment, FDI, start-up ventures and even plant expansion. Unfortunately, this area needs massive improvement. Although Bangladesh has advanced eight steps in the ease of doing business ranking, this cannot be called a huge improvement whatsoever as the country ranks 168th out of 190 countries, and more importantly, Bangladesh ranks 7th among eight South Asian nations. The World Bank developed this index taking into account 10 factors, and regrettably, Bangladesh is lagging behind all these 10 factors including starting a business, dealing with construction permits, getting electricity, registering property, getting credit, protecting minority investors, paying taxes, trading across borders, enforcing contracts and resolving insolvency. The World Bank measures procedures, time, cost and legal structure to resolve a business dispute to define the "starting a business" category. Bangladesh lags behind this area as it takes 1,442 days and 66.8 per cent of the money demanded to resolve a dispute on average to implement an agreement. As a result, there is a negative impact on investment, which is more likely impacting our GDP and the financial account of Balance of Payment.

The apparel sector has long been a major driver of our economic growth. This sector has experienced accelerated growth and development. However, the traditional garment and other industrial development models that supported the growth in the past may not be viable in the future and it already reflects through many data sets. This explains why industry leaders and the government should immediately bring in necessary changes in the garment and textiles and other production models to reap the benefits of the fourth industrial revolution in the near future. The Fourth Industrial Revolution is bringing about the development of new techniques and business models, which will fundamentally transform production process, government decisions, industry and the society at large.

It is likely to have profound impacts on many spheres, not least of which is jobs and employment. The new model of factories will create fewer jobs, and those jobs will require advanced skills. Furthermore, technologies such as artificial intelligence and robotics may destroy or disrupt many jobs in our labor-intensive garment industry. Increased digitalisation will also necessitate more attention being paid to associated risks such as cybersecurity, privacy and data security, to name a few.

Bangladesh is going to lose global competitiveness on quality, cost and production time if it cannot keep it in place. Moreover, the immediate near-term need with a large production workforce will be to train and re-train current employees to close skills gaps created by job shifting in the near future. Also, the export basket needs diversification. The trade policy, logistics and business regulations reforms will be critical for export diversification and trade stability.

The banking sector, the hub of our financial sector, has been experiencing a number of serious challenges due to malpractices, scams, heists, ill governance and government interference. These have adversely impacted the overall performance of the banking sector, which is reflected through various macroeconomic indicators. The entire banking industry is saddled with bad and defaulted loans. The actual size of bad loans is more than double the officially recognised figure. The situation becomes even alarming when these defaulted amounts are rescheduled and restructured time and again to mask the original problem. This is how these loans are re-emerging in the balance sheets as fresh regular loans, and increasing the banking sector's asset base. A large number of defaults were by choice and not due to any unexpected financial hardship. There seems to be a deep-seated pattern of non-payment of loans by certain segments of the population. This situation is likely to heighten as our new policy with a maximum of 9.0 per cent interest rate levied on the rescheduled loans, a 2.0 per cent down payment and a more relaxed and generous time frame for repayment with a grace period of another year seems to have a special provision to safeguard the existing defaulters and incite future probable defaulters. Due to high amount of defaulted loans, the liquidity crisis in banks continues to worsen. This has also limited their capacity to extend funds to the government. Also, banks are not able to attract adequate deposits due to a very high government bonds rate. Thus, the basic finance theory of high risk-high return does not seem to hold in our financial sector when it holds to the rest of the world. Moreover, when the existing number of banks was already high compared to the size of our economy, it was suicidal to approve more banks, and add to the list. Policymakers should immediately design appropriate policy papers and guidelines to reduce the number of banks by merger and acquisition. Political influence should immediately be stopped, and the central bank must act strong and put an end to this suicidal culture. Sound corporate governance should be in place, and the concerned authorities should focus on improving the banks' health and banking practices. Otherwise, this single most important sector can hold back the economy from reaching its next stage of desired growth.

As an optimist, the author strongly believes Bangladesh can translate all these challenges into opportunities to take forward the economy and grab the benefits that the future world and new technological era have to offer because if there is a good will and sincere attempt, there is always a better way.

The writer is an Assistant Professor at the Institute of Business Administration of University of Dhaka, a Fulbright scholar and a Wells-Ghani visiting scholar at the Kelley School of Business, Indiana University-Bloomington, USA. She can be reached at tasneema@iba-du.edu