From cooking to cars

LPG is the fuel for tomorrow's Bangladesh

Whether you are a regular tea-drinker in your local area, or live in the city in a newly-constructed house without a gas pipeline, you are familiar with liquefied petroleum gas (LPG) cylinders. Chemically, LPG is a mixture of propane and butane. Although LPG was first introduced by state-owned Bangladesh Petroleum Company (BPC) back in the 1980s, it did not gain popularity until a few years ago, when the government decided to restrict issuing new gas connections to households. Bangladesh has historically been a gas-dependent country with natural gas fueling the stoves of its urban households and natural gas is also now the next most commonly used vehicle fuel after petrol. The three-wheeler automobiles in cities and towns are even called CNGs which actually stands for Compressed Natural Gas, the fuel, on which the vehicle runs. In terms of cooking fuel, rural households still are predominantly dependent on firewood and dung, although the trend is decreasing slowly.

With depleting gas reserves, and a constant growth of 5.98 per cent (benchmarked as of 2014-15 in the PetroBangla annual report-2016), in demand for natural gas will outstrip supply by 2025-26, given that no new gas fields are discovered. 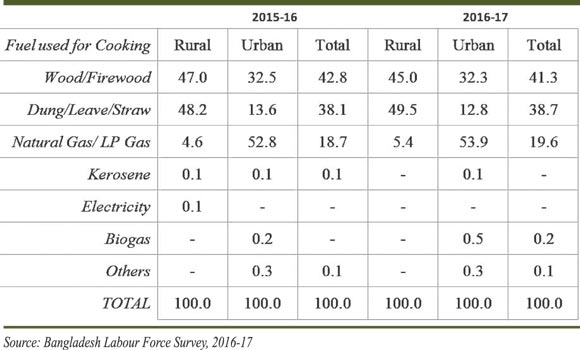 Power and industry remain the prime users of natural gas, consuming almost 57 per cent of produced natural gas, while domestic users account for 15 per cent of total natural gas produced. To cater to the fuel-hungry manufacturing sector, the government has started importing LNG through floating storage regasification units (FSRUs), which is subsequently blended with domestic gas in the national gas pipeline. Currently, the LNG terminal and regasification unit run by Excelerate is operational, supplying gas at the rate of 500 mmscfd per day, corresponding to 17 per cent of energy demand. Summit Group, a local conglomerate, is building the country's second LNG terminal which is expected to be operational by 2019. However, the government is planning to use this imported LNG for mainly power plants and commercial sectors. 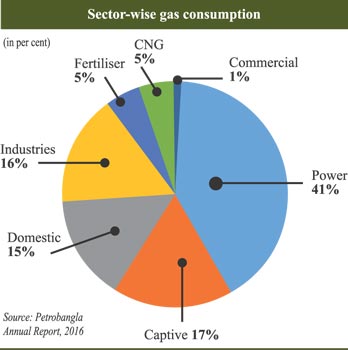 With depleting gas reserves, it is more feasible to ration the country's natural gas for industrial use and promote LPG as the cooking fuel for households. Bangladesh has one of the most liberal household gas usage policies in the world and sees unlimited use for a fee of less than USD 10 (BDT 650 for double burner stoves, before 2016). However, the government had increased the household gas prices to Tk 950 in 2017 and plans to increase it even further, in an attempt to bring parity with LPG.

The LPG production in the country started in 1978 when the LPG recovery unit at Eastern Refinery Limited (ERL) was set up in Chattogram by Bangladesh Petroleum Corporation (BPC). LAUGFS Gas Bangladesh (formerly Petredec Elpiji Ltd), was the first private sector LPG import and distribution company in the country in 1997. Later Bangladeshi company- Bashundhara LP Gas Ltd entered the market in 1999 and Jamuna Spacetech Joint Venture Ltd joined in 2000. During the 2013-14, the LPG market witnessed a boom with players such as Omera Petroleum, BM Energy entering the market, and the construction of satellite plants for LPG storage, expansion of retailer networks, etc. contributed to an expanding market.

The potential market for LPG remains in rural regions. Rural consumers are mainly dependent on biomass and firewood as cooking fuel and use clay stoves. The advent of urbanisation and industrialisation is affecting the unavailability of firewood and on the other hand as people's' incomes are rising at a steady rate, the rural and peri-urban population are aspiring for an improved life-style, and many are transitioning into using gas-stoves with LPG connections, giving them a more modern and improved cooking environment. It should be noted that a 13KG LPG gas cylinder is equivalent to 180 KWh of energy which is equivalent to 25 KG of coal or 91 KG of Wood. Therefore in a nutshell, increasing household consumption expenditure, urbanisation, depleting natural gas reserve, aspiring consumers from peri-urban and rural areas, unavailability of biomass are increasing the demand for LPG.

Currently more than 95 per cent of the LPG demand is met by import from various countries - such as Singapore, Malaysia, Saudi Arabia, Abu Dhabi and Kuwait. Private companies engage with them to cater to the market demand. In order to promote the use of LPG, the government is providing favourable policies and incentives. There is tax exemption for import of LPG, and the previously imposed 15 per cent duty on the import of LPG cylinders was waivered in 2017. Another favourable government tax measure for the industry is the reduction in AIT (Advance Income Tax) from 5.0 per cent to 2.0 per cent.

A number of players are already operating in the market with Bashundhara, Omera and BM securing top position. However, 23 new companies have applied for licence and six new companies are scheduled to enter the market in 2019. As product differentiation is low, new companies are providing cost cuts to capture and penetrate new markets whereas old players are trying to align with them to protect their positions. Due to high capital intensive nature of the industry, only companies with a long-term vision and deep pockets will be able to survive in the long run.

While the LPG industry is estimated to grow three times to 2.5 million tonnes within 2021, with so many industry players in the pipeline and low differentiation in product variety, how can the players survive and stay profitable?

The future remains in innovation and customer-oriented services. Companies such as Beximco focus on the safety design of cylinders, while Omera focuses on their retailer distribution network, and again other companies can leverage different modes of partnerships and additional services to leverage their brand image. LPG use can extend beyond just cooking fuel. Autogas, a form of vehicle fuel made from LPG, is more cleaner in terms of carbon-fuels such as petrol. Already permits for LPG conversion centres and LPG pumps have been procured by Basundhara Group and Jamuna Group. In future, when gas reserves will be restricted more, the 'CNG' vehicles will be converted to LPG fuel or autogas.

In some countries, LPG is used for fueling power-stations. While the use of LPG for power-stations may not be feasible for Bangladesh, mixing LPG with LNG can increase the fuel efficiency and it is a common practice in Japan. With almost 50 per cent of the population still using bio-fuels, the latent market for LPG remains full of potential and sustaining the growth of the LPG players in tomorrow's market can only come through customer-centric innovations.