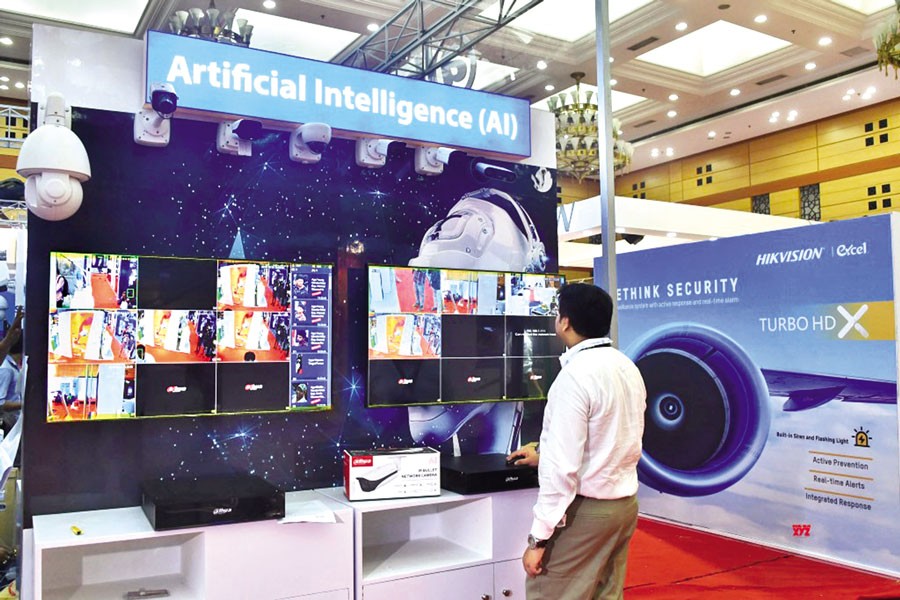 A visitor at the innovation expo in Dhaka last year — Xinhua

Recently Global Innovation Index (GII) 2020 has been published. This is the 10th annual ranking of 130 economies. It ranks economies based on the marks they receive in eighty indicators of seven categories. Some of the indicators are scientific publications, patents, graduates, foreign direct investment, and infrastructure. Like the past, Bangladesh's position in the bottom segment has remained unchanged. However, countries like India and Malaysia have been making steady progress. It requires investments for attaining progress in many of the 80 indicators used in preparing this ranking. Does it mean that Bangladesh and many other developing countries should accelerate investments for uplifting their relative positions in GII and other similar indices? However, is there a strong correlation between advancement in these indicators and economic benefits derived from innovation? Do we run the risk of making a wasteful investment for uplifting the position in GII's ranking?

Development imperative of innovation: In producing economic outputs, we need three basic inputs: i. natural resource, ii. labour, and iii. ideas. Of course, to mobilise them, we need capital. In the articulation of Prof. Paul Romer, economic value creation is a function of ideas and objects. Natural resources, labour, land, logistics, and factory buildings belong to objects. We all know that Bangladesh's per capita natural resource is extremely insignificant. So far, Bangladesh's advancement has been due to the commercialisation of labour. However, labour-based economic value creation does not offer a sustained path of growth.

Furthermore, a growing portion of Bangladesh 50 million students will not be willing to participate in the conventional labour market. On the other hand, attaining the eligibility of producing and trading ideas as product and process features offer a sustained growth path. Moreover, Bangladesh's growing university graduate pool is eagerly looking for an opportunity to participate in the idea economy. Hence, innovation has been gaining immense importance for Bangladesh to address two major challenges. The first one is to create employment opportunities for an increasing number of university graduates, and the next one is attaining sustained economic growth. Hence, Bangladesh can address both these two challenges with the success of producing and trading ideas-as product and process features.

Challenges of turning GII ranking into economic value: Among the 80 indicators used in GII, many of them are inputs to the innovation process. Some of them are patents, publications, infrastructure, tertiary enrollment, graduates in science and engineering, and R&D investment. Of course, Bangladesh needs to make progress in these indicators. Fortunately, it's very much doable for Bangladesh. Once Bangladesh starts increasing investment-which Bangladesh is in a position to do-those indicators will start growing. Subsequently, Bangladesh's position in GII and other innovation indices will also be increasing. But, there is no natural correlation between those indicators' value and economic value created out of them. Therefore, Bangladesh must figure out how to establish this correlation. It's a highly complex issue, indeed. For example, upon having massive R&D and other investments, China has uplifted its position in GII to 14, even above Japan (16). But, China's success in turning those indicators into economic value yet to show up.

Examples of up ranking: Among developing countries, India's uplifting in GII ranking is remarkable. Over the last five years, India's ranking has progressed from 85 to 48. Similarly, Malaysia has tremendous progress, reaching the 33rd position. Of course, China's 16th position outshines many others. According to recent statistics, India's scientific publications has overtaken Japan. Similarly, China has overtaken USA's top position in scientific publications. China's record of filling 1.3 million patents among global 3 million is quite remarkable indeed. However, more than 85 per cent India's engineering graduates are not finding engineering jobs. There has been massive lay off in India's outsourcing IT industry. On the other hand, India's domestic market of the mobile handset has been lost to China. Moreover, due to the emergence of the electric vehicle, India is on the verge of suffering from major job loss in the automobile sector. There is no indication that India has made any progress in transferring huge scientific publications into ideas and turning them into product and process features to make India's economy stronger. Similarly, other than reengineering and imitation, China's progress in transferring a large stock of patents into innovation success stories yet to show up. On the other hand, despite a huge FDI flow in high-tech and the 33rd ranking in GII, Malaysia has been still trading labour in the high-tech industry. There has been no Malaysian success story in creating significant economic output from ideas.

Way forward: Before starting borrowing and making an investment in improving GII indicators, Bangladesh must establish a correlation between progress in those indicators and economic value creation. It should begin with the creation of demand for science and technology ideas for improving quality and reducing the cost of whatever Bangladesh is producing now. To create this demand, Bangladesh must start closing all the doors of making a profit out of protection. Profit-making opportunities from tax differential, subsidy, environmental damage, and other means must come to an end. It is worth noting that turning technology ideas into profitable revenue by making products better and less costly is an extremely difficult job. Along with the creation of this demand of ideas for addressing competitiveness, Bangladesh should start making an investment for increasing the supply of those ideas for which demand has been created. Instead of focusing on establishing the linkage between demand and supply of ideas, resource allocation for increasing GII ranking runs the risk of wasteful investment. Furthermore, Bangladesh should focus on the redesign of products and processes as opposed to embarking on curiosity-driven disruptive innovation at this point in time. Moreover, Bangladesh must focus on developing the culture for pursuing the passion for perfection for producing better quality products at lower cost out of scientific knowledge and technology ideas.

The writer is an academic and researcher in technology, innovation and public policy e-mail: [email protected]