Global trade in crisis amid Covid 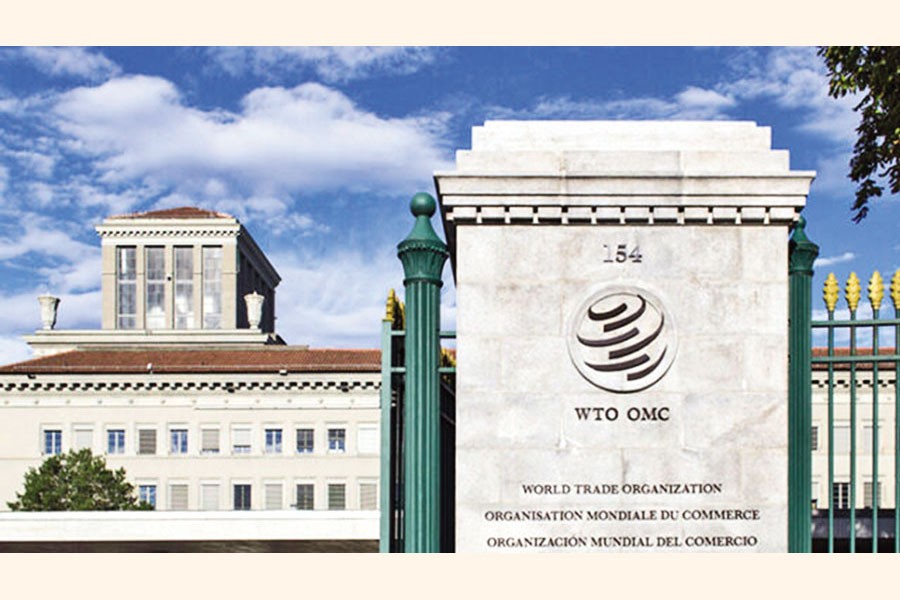 The global economy has never been as closely integrated as is to-day. Global flows in goods and services as a share of global GDP has risen from 35 per cent in the mid 1980s but close to 60 per cent now notwithstanding the impact of the Global Financial Crisis (GFC) of 2007-08. But all that has changed and the global trading system is now faced with an unprecedented crisis. The ongoing public health crisis induced by the pandemic has already become an economic and social crisis that is also severely impacting on the global flows of goods and services as well as investment flows.

According to the World Trade Organisation (WTO), global merchandise trade is set to plummet by between 13 and 32 per cent this year due to Covid-19 pandemic. To put these figures in perspective, the optimistic outlook would be worse than the 12 per cent decline in merchandise trade flows during the height of the GFC in 2008-09. Under the most pessimistic scenario, the decline could be equivalent to that of the fall in global trade flows seen during the first three years of the Great Depression from 1929 to 1932. 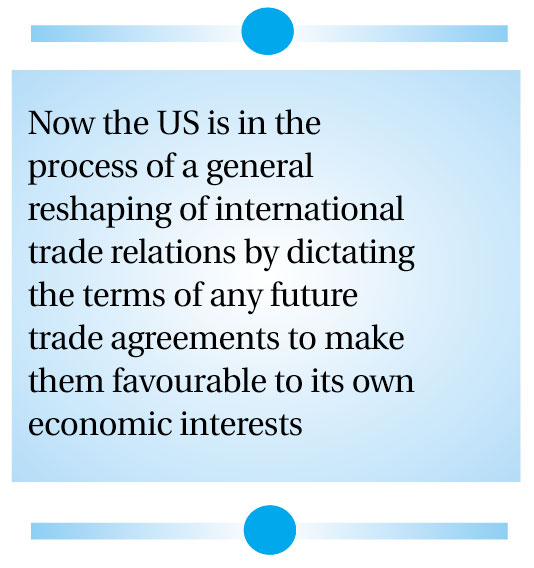 The WTO further points out that a recovery in trade in 2021 is expected but that will depend on the duration of the pandemic and effectiveness of the policy responses. All regions around the world will experience double digit decline in trade volume with services trade being affected most directly through transport and travel restrictions. The WTO particularly has singled out sectors with complex value chains like electronics and automotive products that are likely to see steeper fall in their trade flows. Merchandise trade volume in US$ terms declined by 3 per cent in 2019 which was largely caused by trade tensions and slower economic growth.

The WTO further pointed out while no forecast for services trade was provided, but trade in goods could not be possible without them e.g. transport. Also, unlike goods, there are no inventories of services to be drawn down today and be restocked at a later date. So decline in services trade during the pandemic would be lost forever.

Now as the Covid-19 pandemic has put the global economy into its worst dive in almost a century, the intensification of trade conflicts by the Trump administration is further threatening the already very weakened global economy and global trade will continue to deteriorate. These developments are threatening jobs and livelihoods and discouraging companies to invest and expand. A global recession while remains unlikely at this point in time even when most economies have slowed down but dangers are clearly mounting as the second wave of the corona virus spreading throughout Europe and no sign of slowdown of its spread in the US. This is now impacting work places, and then spreading to households in the US and Europe. Other major economies in the world are also in the similar situation at varying degrees.

Now leaving aside the real economy and moving onto financial markets, the signs are not very optimistic either. Stock prices save technology and health care stocks are dropping and money shifting into treasury bonds, a very traditional safe haven in uncertain times. Since the demand for the US dollar is rising, it has started appreciating. To counteract the rising dollar the Federal Reserve lowered its rates into a range between 0 and 0.25 per cent. The shift towards easier money has been triggered by the concerns that the global economy is weakening in part, if not wholly, because of trade tensions initiated by President Trump. Crude oil prices are also falling indicating weaker global economic growth and less movements of goods and travel.

The Covid-19 pandemic has accelerated the process of global economic slowdown which was already underway before it started. Now in the midst looming global economic crisis, in fact, the future of the multilateral organisation -- the WTO -- that we need most now to steer us through this difficult economic time for ensuring free and fair trade, the WTO, is in grave doubt.

There has been eternal temptation in international trade protectionism by all countries. They are happy to sell to other countries but not so willing to buy from them. But a country must export to enable it to pay for its imports, otherwise trade flows will l come to a halt. The two way trade flows enable countries not only to earn money but also to pay for their imports . So free movement of goods has become mutually beneficial for all trading nations as exports pay for imports.

The WTO helps member countries to reduce their import duties or as is called "tariffs'' and other restrictions on imports and continue to keep them down so all its 164 member countries can mutually benefit. The WTO performs three major roles to ensure free and open trade flows in goods and services.

First, it undertakes successive rounds of trade negotiations for reduction in tariffs as well as other trade restrictions by member countries. Under the auspices its predecessor the General Agreement on Tariffs and Trade (GATT), there were eight rounds of such negotiations took place resulting in substantial reductions in tariffs. `The eighth and the final round (also known as the Uruguay Round) of trade negotiation under the GATT also led to the establishment of the WTO in 1995 to replace the GATT.

The Second function is to ensure that member countries comply with the rules agreed on in the rounds. One major rule is "Bound Tariff" which implies once a tariff reduction is agreed upon, it can not be increased again. Other two rules are the" Most Favoured Nation (MFN)" rule which ensures non-discrimination between member states and other key rule is the "National Treatment" where once imported goods inter a country after completing border formalities, these goods must be accorded the same treatment as locally produced goods.

The Third role is to formally adjudicate trade disputes between member countries enabling the WTO to enforce it rules. However, serious disputes go to a court like "Dispute Settlement Body" and if necessary can also go to an "Appellate Body''.

The whole purpose of the WTO is to ensure a rule based open and free trading system to enhance global economic welfare. Thus the WTO rules are designed to keep global trade free and fair by discouraging countries from backsliding and help governments to resist local pressure to revert to protectionism. In particular, to stop small countries like Bangladesh being pushed around. Therefore, it is beneficial for countries like Bangladesh to be a member of the WTO which ensures that every country sticks to the rules.

The WTO has been finding it very difficult to perform all the above three functions for some time. In fact the difficulties faced by the WTO have started quite some time ago. Its first role to undertake further rounds of talk to further reduce barriers to trade is hopelessly stalled, possibly dead. The Doha round was launched in 2001, but the failure to complete the Doha round of trade negotiations of the WTO already signalled the beginning of a decaying process quite some time ago even before President Trump taking sledgehammer to dismantle the process. In fact, the chances that the WTO can deliver a multilateral round of negotiation to further liberalise trade and investment is practically zero now.

The second role to ensure member countries' compliance with the rules primarily relies on the peer pressure for most the its enforcement. But the world is now in the grip of a global trade war waged by the US against China, the EU and other countries. Therefore, the US as the single largest trading nation in the world is signalling it has no interest in playing the pivotal role to agree on sensible rules and to stick by them. In fact, the US now practically defying the already agreed rules.

Now the third role to adjudicate trade disputes is in serious jeopardy as the US used procedural loophole to render the WTO appellate body dysfunctional verging to irrelevance. As if that was not enough, the US refused to approve the WTO's budget and President Trump has expressed his desire to quit the WTO altogether.

It is now increasingly becoming clear that the global trading system that has helped to serve the economic interests of the US so far, is no longer capable of serving that purpose. Now the US has started the process of stripping off the very essence and meaning of the rule based multilateral trading system and regressing into pursuing its own self national interest without any regard for any global rule based international order or multilateral institutions like the WTO.

Now the US is in the process of a general reshaping of international trade relations by dictating the terms of any future trade agreements to make them favourable to its own economic interests while directing all efforts to dismantling and undermining the current multilateral trading system. This policy surprisingly has bipartisan political support in the US including a section of the US academic economists as reflected in Professor Lawrence Summers' rather very unusual recent theoretical input in support of protectionism by advocating to advance resilience over efficiency. Professor Summers was also a former US Secretary of Treasury.

Covid-19 has just further accelerated the weakening process of the WTO and its role in promoting the free and open multilateral trading system, a process that has been underway even before the pandemic. But the US is making concerted efforts to slowly but surely to dismantle the global rule based multilateral trading system by undermining and rendering the WTO ineffective, the very institution that upholds the principles of a rule based open multilateral global trading regime which is very vital to safeguard the economic interest as well the livelihood of millions of people especially in developing countries like Bangladesh.

If a fragmented regionalised global trading system is the likely alternative to an open rule based global multilateral trading system where trade relations will be to a large extent be governed by relative power rather than rules, will create an unprecedented crisis in conducting international trade relations. Developing countries like Bangladesh if remains outside a regional or bilateral trading arrangement will be at the greatest disadvantage with serious economic consequences for the country and its people. Therefore, the economic future of not only developing countries like Bangladesh but also of developed countries is critically depends on reinvigorating the WTO and policy changes in the largest trading nations especially the US.

Muhammad Mahmood is a political and economic analyst.