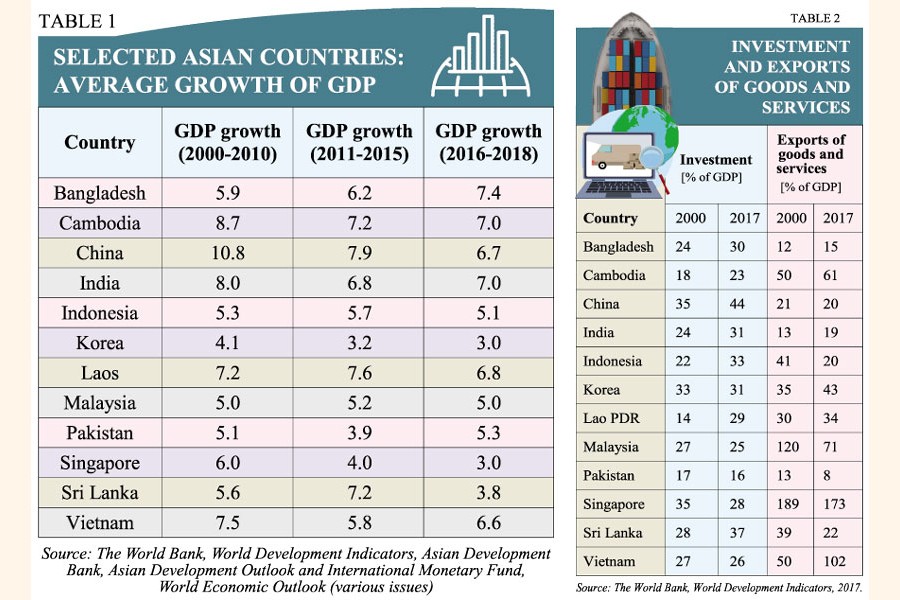 Practically all countries in the world have suffered major setbacks in their macroeconomic performance due to disruptions to economic activities caused by Covid-19. Bangladesh is no exception. This article is not about the impact of Covid-19 per se, though references will be made to it as needed. The objective is to give a summary picture of Bangladesh's achievements in selected dimensions of the macro economy and the challenges the country has to overcome in order to improve its performance.

Macro economy is a multidimensional concept encompassing diverse issues such as growth of gross domestic product (GDP), employment, incidence of poverty, distribution of income among various segments of population, development of human resources, price stability etc. The focus in this article is on two critical issues: Growth and poverty alleviation.

There are a number of reasons why countries, in particular developing ones, seek to accelerate growth. It is likely to create more employment opportunities, including for the poor and unskilled workers. Apart from the direct employment, the poor benefit, at least partially from the trickledown effects of growth.

Growth generates more resources for the government that can be deployed for provision of extensive public services such as preventive and primary healthcare, education, infrastructure (roads, railways, water transportation), energy etc. which benefit most of a country's population, including the poor. With greater availability of resources, governments are in a stronger position to expand the coverage of programmes specially targeted to redress the plight of the poor.

Growth is a headline number that attracts the attention of the world. It generally encourages foreign direct investment (FDI) which helps meet foreign exchange gap. Foreign investors, under appropriate circumstances, contribute to technology transfer, enhancement of skill of workers and management expertise through demonstration effect. 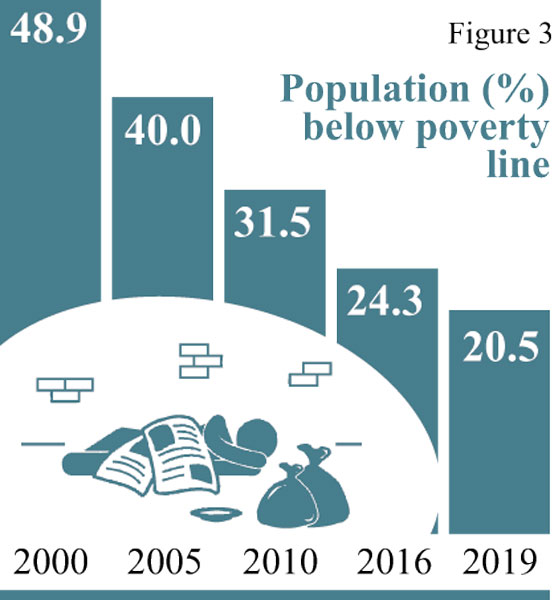 In the context of desirability of higher growth, it is regrettable that Covid-19 has exerted a significantly depressing effect on Bangladesh. According to government estimate, Bangladesh's GDP growth in fiscal year (FY) 2019-20 was 5.2 per cent, considerably lower than the average of 2016-2018 period (7.4 per cent). The only consolation is that this performance is better than most countries of the world. According to International Monetary Fund, in 2020 global growth world be -4.4 per cent, growth of China, India, Germany and Japan would be respectively +1.9 per cent, -10.3 per cent, -4.0 per cent, -4.4 per cent and Saudi Arabia -5.4 per cent. It is earnestly hoped that Bangladesh is not affected by the second wave of Covid-19 attack.

Determinants and challenges: Many factors contribute to a country's growth. The focus in this article is on investment and exports. The rationale is that these two factors are strongly correlated with growth performance of most developing countries.

Investment: In Bangladesh investment grew positively albeit at a rather slow rate (Table 2). However, a matter of concern is that private investment as proportion of GDP remained stagnant between 22-23 per cent over almost a decade (FY 2011-FY 2019). In FY 2020, according to official estimate, the proportion fell drastically to 12.7 per cent as a result of the unfavorable situation created by Coviid-19.

With or without Cocvid-19 Bangladesh has to confront a number of challenges to spur investment. These include deficiencies in physical infrastructure, energy, political uncertainty, poor quality of education leading to poor quality of human resources, and low scores in Governance, and Ease of Doing Business indicators.

As regards Governance (which is based on Rule of Law, Control of Corruption, Government Effectiveness, Absence of violence and Regulatory Quality), achievement of most Asian countries is better than that of Bangladesh.

With respect to Ease of Doing Business also Bangladesh gives a rather dismal picture despite some improvement in recent times. This indicator is based on 11 sub indicators: Starting a business, Dealing with construction permits, Getting electricity, Registering property, Getting credit, Protecting minority shareholder interest, Trading across borders, Enforcing contracts, resolving insolvencies and Labor market regulations. In 2017 the rank of Bangladesh was 177 implying that 176 countries performed better. Various agencies of the Government are trying to effect improvement in consequence of which there has been some upward movement. According to the latest available information the rank of Bangladesh stood at 168.

Exports: Bangladesh has been doing reasonably well in exports which increased from 4.9 per cent of GDP in 1985 to 15 per cent in 2017 (table2). However, its performance pales in comparison with other Asian countries. In 2017 only Pakistan had lower exports in GDP. This sector suffered a severe jolt in FY 19 when the proportion of export to GDP fell to 9.0 per cent. Some signs of recovery have emerged recently. Garments which account for about 85 per cent of total exports hit rock bottom of $0.7 billion in April 2020, rose to $3.24 billion in July 2020 and $2.47 billion in August 2020.

An important challenge in the area of exports is to reduce overwhelming dependence on garments. Other challenges are raising the quality of garment products so as to be able to fetch higher unit price, diversification of the basket of export goods and diversification of destination markets. In this context it is worth mentioning that garment exports to non-traditional markets have suffered declined in absolute value in recent times. The growth has come mainly from the traditional markets: the European Union, the United States and Canada. However, there are worries that the growth may not be sustained due to the second wave of Cocvid-19. Total exports suffered a negative growth of -16.9 per cent in FY 20. In July-August period of the current fiscal year there has been a modest increase of 2.2 per cent over the same period of the last fiscal year.

Poverty alleviation: For a country like Bangladesh with a large number of people below poverty line, poverty alleviation is unquestionably an important macroeconomic objective. This is not merely socially desirable, but also an economic necessity. The reason is poor people cannot afford to invest in health, education, training etc. and therefore overall productivity of the country suffers.

Here again Bangladesh made substantial progress over the years but the progress is undesirably slowing down. The annual average rate of reduction of the proportion of people below poverty line was 1.8 per cent between 2000-2005, 1.7 per cent between 2005-2010, 1.2 per cent between 2010-2016 and about the same between 2016-2019 (See Figure below). In part this eventuality can be attributed to rising inequality of income distribution. In order to bring about a change in this scenario, it is essential to increase budget allocation for social safety net, health and education and ensure effective use so that desired benefits can be harnessed. This has assumed high priority because Covid-19 has dealt a severe blow to household income. It is reported household income on average fell by 20 per cent between March and August 2020.

A few concluding comments: This article has focused on only two dimensions of Bangladesh's macro economy: growth and poverty alleviation.

• In Bangladesh growth acceleration has been accompanied by falling rate of poverty reduction. The underlying causes should be identified and appropriate corrective actions should be undertaken.

• The Government has announced stimulus packages amounting to well over Tk 1.0 trillion, but there are many complaints about improper distributions. These should be addressed.

• Public expenditure on health, education and social safety net should be further increased while ensuring effective use.

• Basket of export goods as well as destination market should be diversified and higher quality should be ensured.

• Institutions of delivery of various incentives and stimulus packages to deal with the unsavory impact of Covid-19 should be more efficient and the bureaucracy has to be made accountable. So far a small proportion of stimulus packages for cottage, micro, small and medium enterprises as well as for the farm sector has been disbursed.

Dr. Mirza Azizul Islam is a former Adviser to the Caretaker Government, Ministries of Finance and Planning, and presently a Professor in Graduate School of Management at BRAC University.