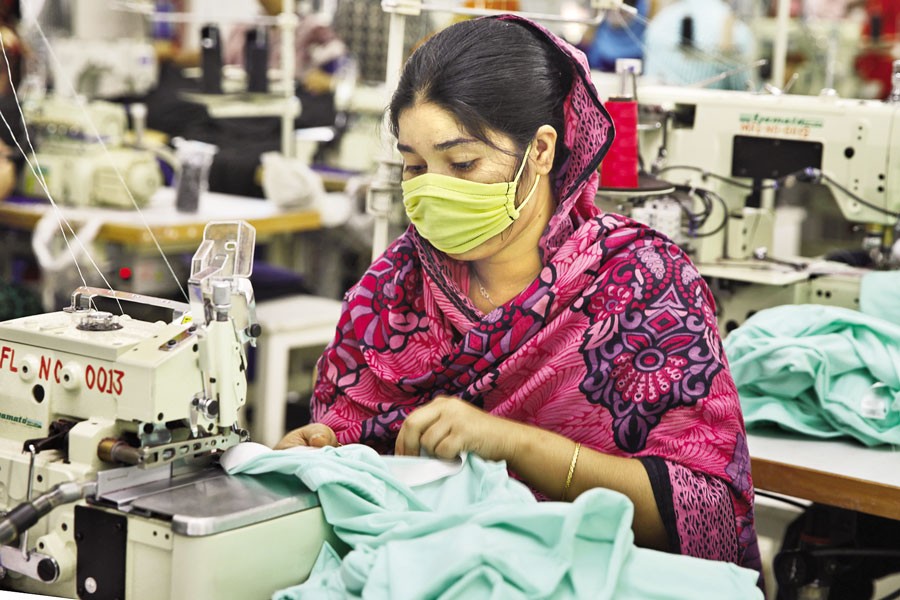 Since the Covid-19 general holidays were first announced in March 26, 2020, Bangladesh Garment Manufacturers and Exporters Association (BGMEA) insiders have reported that, although factories are to maintain health safety protocols when they want to continue production, there have been little compliance by the owners and workers. In mid-April when workers were being paid their March wages, the additional superintendent of police at the industrial police headquarters stated that it was not possible to make the factory workers practise social distancing, even when the police tried. Trade union leaders interviewed during the lockdown month all revealed their reluctance to resume operations and fear for workers as it was a daunting task to maintain social distancing in factories. Industry insider information additionally reveals that social distancing in the ready-made garment (RMG) sector is not feasible and practical in factories running at high capacity. Thus, it is abundantly clear that the decision to, at the very least, train the executives and workers before reopening as decided in the April 25, 2020 meeting was absolutely necessary, but factories opened against the schedule and with invariably no time to implement the rule.

Social distancing is difficult because some factories have dense seating arrangements and for some it is not possible to change the worker arrangements due to space constraints. As decided, running at a lower capacity could have been a solution to the problem but haphazard and unsystematic opening after the lockdown have prevented such measures. Additionally, there have been reports that even at the initial stages, when workers rushed in, whether contracting the virus or not, the factories were running at 60 to 70 per cent of their capacity making the factories highly susceptible to the infection. Despite these challenges, it is essential for workers to have been trained to follow protocols and guidelines like wearing masks and washing their hands to reduce the chances of contracting the virus. This is especially true because as pandemic fatigue wore in, as it is now, it is very important for workers to develop the habits that can guarantee a certain degree of safety.

After the industrial lockdown, the independent trade body BGMEA and the government agency Department of Inspection for Factories and Establishments (DIFE) under the Ministry of Labour and Employment (MoLE) claimed that they had been active in enforcing health protocols to prevent the spread of the virus and both institutions arranged for teams to audit the factories. The BGMEA team, comprising BGMEA personnel, audited a total of 508 factories up and until May 11, out of which 492 had been found satisfactory (there is no further update on factories audited till writing this article). The audit report needed to be exhaustive to ensure safety, but it was far from it, as it only contains yes or no responses to six parameters/questions relating to wearing masks, hand washing/sanitizing, cleaning feet while entering, presence of a thermal meter, social distancing and cleanliness. However, in hindsight, only maintaining these few protocols, which should be mandatory and actionable, have now become daunting and cumbersome to implement due to the initial negligence.

On May 2, 2020 DIFE formed fifty committees to inspect two industrial regions including the capital city, but in a discussion with the inspector general of the institution it was admitted that it was difficult to run factories at lower capacities as workers demand work. On May 7, a DIFE official verified the inspection of factories in only two regions at an online seminar or webinar, despite industries operating in various and multiple zones all over the country. On May 21, 2020 the health ministry directed formation of committees (that include bureaucrats, people's representatives and trade body members) at all the regions that include RMG factories to inspect if health safety guidelines are maintained; perhaps acknowledging the failures of the other groups/teams in the wake of infections and spread of the virus. Currently, there is little to no involvement from relevant authorities to enforce the rules and protocols that ensure workers' safety.

The industrial police record shows a total of 444 incidents of worker demonstrations in the RMG sector in the month of April, mainly demanding payments but also protesting retrenchments in addition to demanding closure of factories for lack of health standards. Workers stopped demanding the closures overlooking their health safety after the announcement of only partial payment of their April, 2020 wages as it threatened their economic livelihood in this time of crisis. Workers further protested, putting health and lives at risk, the government decision to pay 50 per cent of the festival bonus after the Eid holidays in addition to the wage-cut for the month of April, and in large numbers: 10,000 workers protested on May 9 demanding full payment of gross salaries for April; 4,000 workers protested for a second day on May 10 demanding full pay; 3,000 workers demonstrated demanding reduction in house-rent against wage-cut on May 10; 10,000 workers protested demanding full payment of April wages and festival allowances on May 13; and 25,000 workers protested demanding full festival allowance, reopening of factories and partial wages for the month of May on May 21. Thus, it is evident that workers, given their economic susceptibilities, value livelihood options and opportunities over health safety and there indeed needs to be active enforcement of such protocols by government authorities, trade bodies and businesses to ensure their safety in these trying times.

Workers' livelihood has indeed been at high risk as a Centre for Policy Dialogue (CPD)research finds that workers have been found to take personal loans and had severe trouble in paying for house-rent, utilities and schooling of children. Furthermore, lack of international orders affected the sector with buyers having cancelled and backing off from orders over the period of the global lockdown due to the pandemic. However, what is important to note is that since the beginning of the general holidays to the end of the industrial lockdown and reopening of the economy, politics has left the sector without oversight and has put the lives of the workers at serious risk. Workers come from the lower income brackets and support their families, and it is only normal for them to opt for livelihood options over health safety. However, livelihood and health safety do not need to be mutually exclusive. Irresponsible lockdown politics has increased the risks of transmission, but active participation of relevant institutions and inculcating simple safety habits like wearing masks, sanitising hands, cleaning feet and maintaining cleanliness may have brought about or resulted in persisting behavioural changes among staff and workers even where social distancing becomes challenging. Such changes mitigate risks and even though workers, and the rest of us, may be currently tired and fatigued from the ongoing pandemic, habitual changes must have lessened the blow of an already dire situation.

Karnapara Spinning Mills Limited. This article is adapted from a research conducted by the author for an academic institution.