Left movement in the sub-continent 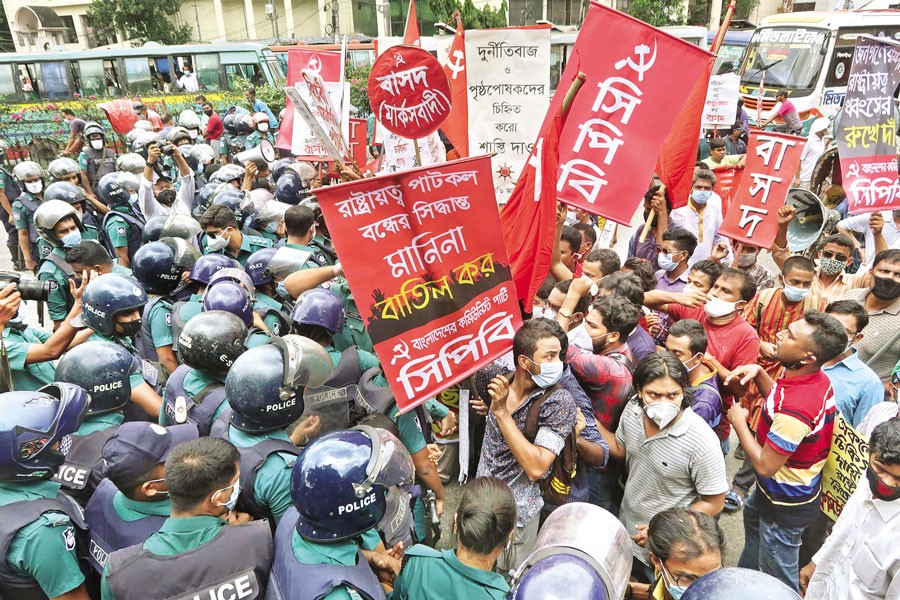 British colonial rulers had veritably conjured up a demon out of the nascent left movement in the Indian sub-continent in the very early 20th century. There were also ample reasons to completely ignore the spectre of communism which was said to be looking for ways to infiltrate the popular independence movement. Moreover, the rightist Indian leaders in the 1930s considered the fear as being baseless. But the modern economists do not fully undermine the potential for an emerging leftist movement in the sub-continent at that time. In fact, leftist analysts of the British colonial economy focus on the commitment of the young independence activists in the 1930s which leaned to Marxist ideology. Initially, their followers, visibly interested in the theoretical left's intellectual aspect, were negligible in number. At one time they began carrying out their activities in the open. But the scenario did not take long to undergo remarkable changes.

As decades wore on, youths in different regions, especially in Bengal, took up the cause of communism. With them getting vocal, a few of them interspersing the independence movement with Marxism, they opted for going underground. A section of the later generations, thus, discovered the roots of a pure communist movement in the sub-continent's independence struggle. As a corollary they became an anathema to the British rulers.

There were few dominant signs of leftist activism in the sub-continent in the 1930s. Even the ideologues were not confident of the ability of socialism, then the socially correct term for communism, to take root in the sub-continent. In spite of this, the agro-based vast colonised empire prompted many of Europe's left enthusiasts to foresee a` red' Indian sub-continent.

Yet an irony cropped up. A strain of underground communism-inspired Indian independence movement began taking shape after the world-shaking October 1917 Bolshevik Revolution. It carried the seeds of the socialist state of the Soviet Union established in 1922 by Lenin and his trusted comrades.

The Communist Party of India was founded formally in Kanpur with the direct participation of M.N.Roy, the legendary radical humanist, Abani Mukherjee and Charu Majumdar. Earlier, the combination of Marxism and 'international nationalism' had found its way forward with the launch of the Communist Manifesto in1848 by Karl Marx and Angels, the German philosophers-historians-economists. The historic event took place in London. Although the following generations of Indian young radical activists were dismayed at seeing the type of nationalism propounded by the Manifesto, they took heart from the German politico-economic philosophers' stance on the economy vis-à-vis labour rights and welfare. Later in his 'Das Kapital' (1867), Karl Marx identified the agro-based sub-continent as an ideal land for converting into communism. Thanks to the vehement opposition from the colonial rulers, the following course of events went haywire.

Although the ideological essence remained sacrosanct, the communist system appeared to have been adapted to local realities by Marxists from land to land. The colonial and the post-independence India and Pakistan were no exception. Be that the behemoth-like Soviet Union from 1922 or China in 1948, or Cuba in 1959, one feature remained in common. Socialism, theoretically the softer form of communism, was characterised by the denouncement of the state's wealth accumulation among a privileged class. Instead, the nations' wealth must be shared by all citizens equally --- thus the state assuring food, housing, education and medical facilities for everyone. An ideal society should have to be classless. The rich-poor gap has no place in a socialist society. Everyone has his or her collective right to the national resources. This egalitarianism, as expected, continued to draw the downtrodden across the world to the socialistic system --- until the fall of the Soviet Union in the late 1980s.

During the British colonial rule until 1947, the striking absence of oligarchy struck a chord among the time's young progressive leaders. Initially they were few in number. There were reasons. Despite their enthusiasm, the masses felt browbeaten by the persons in charge of maintaining the colony's law and order. Because the rulers didn't waste time to present communism to the people as the roots of social anarchy. But they also realised in the post-World War-II period that the sub-continent's independence was imminent. The possibility did not elude the young nationalists of the soon-to-be created two states of India and Pakistan. Ragtag communists also constituted the radical youths active in the then sub-continent. Despite being a pseudo-democratic state, Pakistan later considered itself vitiated by communism and its fast spread. They even found the influence of communism on the 1952 Language Movement. According to them, all movements in East Bengal that asserted distinctive political and cultural identities were spearheaded by Bengalee communists. To the new state's rulers, nationalism eventually became synonymous with 'communism'. They had little idea that the leaders who dominated the erstwhile East Pakistan's socio-political landscape in the 1950s and the 1960s comprised diehard nationalists. In the two decades after Pakistan's creation, all prominent communists had gone underground. The communist parties were banned. In comparison, the condition in the Indian republic proved much better.

After the creation of the Communist Party of India in 1925, the left movement continued its march amid sporadic persecution and witch-hunting by the colonial rulers. Yet party branches kept opening in different regions of India, especially Bengal. Being a land of educated and enlightened people, left leaders like Comrade Muzaffar Ahmad, Jyoti Basu et al emerged from the region. The left movement gained a footing in the post-colonial West Bengal. Despite its ideological similarity with the power-centre in Delhi, it fell out with the latter for its feeling of comfort with a couple of big powers. The forming of the Communist Party of India-Marxist (CPI-M) dealt a blow to the united left movement in India. It's true the long CPI-M rule brought about radical social changes in West Bengal, Tripura and Kerala, and influenced some other regions; but the pan-Indian left march has been in disarray for quite some time. Had it not been for the fierce intra-party feuds, the sprouting of misguided offshoots and other bottlenecks, the Indian left movement could have emerged as one of the longest-running ones in today's world. It would also have been anachronistic for the present Indian democracy to retain its leftist hangover in the post-Cold War era, yet India would have found many of its systems dreamt of by its founding fathers still in place.

The then East Bengal, now Bangladesh, was once considered a cradle of communist theorists. A significant number of dedicated Marxists emerged from the Bangla-speaking erstwhile province. In spite of their dominant presence, the leftists couldn't make their presence remarkably felt in the pre-independence Bangladesh. Political historians have searched for the roots of this mass indifference towards the socialist system. Among other reasons, they have singled out the overwhelming presence of Bengalee nationalism for the weak position of the Marxists in the then East Pakistan, the eastern wing of the state. Ironically, like nationalism, vis-à-vis, the province's autonomy, communism or socialism was equally an anathema to the oligarchic Pakistani rulers. After independence of Bangladesh, the ragtag Marxist extremists earned a lot of public disapproval for their 'reign of terror' in the southwestern regions of the country. On the other hand, the mainstream communists have virtually failed to create a place for their politics in Bangladesh. The lower middle-class Bengalees and the indigenous communities had discovered a 'liberator' in the CPI-M and its offshoots in West Bengal. In comparison, the left parties in Bangladesh failed to leave any impact on either the peasants or the marginal poor. Today, only a section of the enlightened middle class continues to extend its unwavering solidarity with the left cause. The support is mainly confined to the communist parties' cultural activities. In fact, there are few pure communists in the present Bangladesh, no matter if they belong to the 'pro-Moscow' or 'pro-Peking' faction.

The writer is Associate Editor of The Financial Express, and a poet.