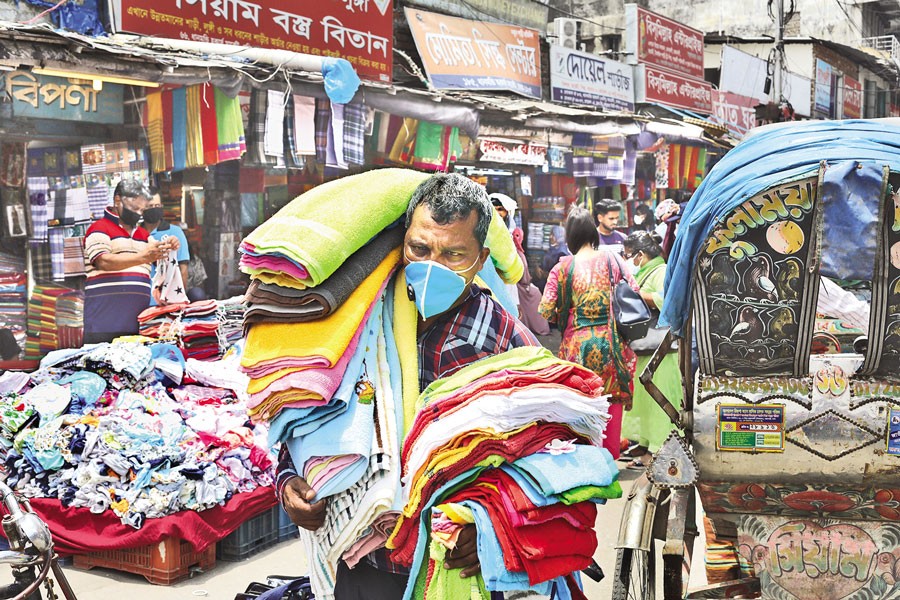 In the past three decades, Bangladesh has made impressive progress in the areas of poverty reduction, accelerated economic growth and human development. However, the onslaught of the Covid-19 pandemic threatens to overturn this progress, further widening the incomeinequalities and disproportionately inflicting sufferings upon vulnerable households.

The background paper for the Eighth Five-Year Plan "Poverty in the Time of Corona: Trends, Drivers, Vulnerability and Policy Responses in Bangladesh" provides an overview of the poverty trends in Bangladesh, adding policy recommendations on what can be done to offset the damage caused by the pandemic.

Even before the onset of Covid-19, the macroeconomic scene of Bangladesh was affected by other issues, notably the plummeting export-to-GDP ratio, dwindling inflow of foreign remittances and the widening fiscal deficit. Even then, advancement continued to happen in several facets of the economy.

The poverty rate of Bangladesh has been rapidly declining in the past 15 years, from being 49 per cent in 2000 to a much lower rate of 24.3 per cent in 2016, according to the Household Income and Expenditure Survey(HIES) 2016. The estimated pre-Covid level of poverty was 20.3 per cent in the first quarter of 2020. 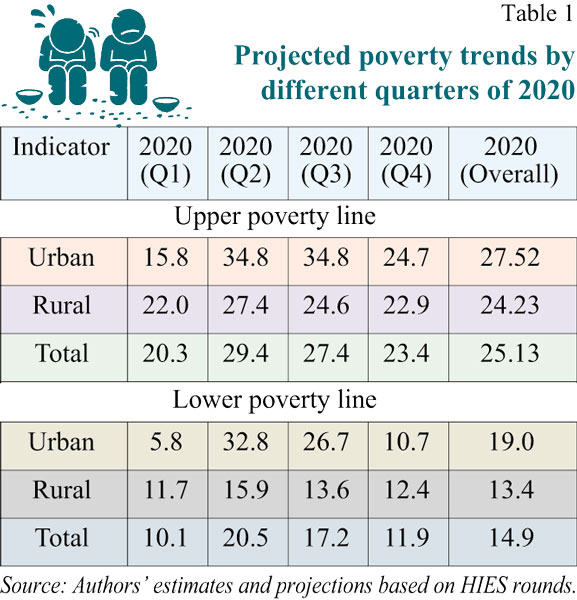 The situation has predictably deteriorated due to Covid-induced hard lockdown: poverty in the second quarter has sharply increased to 29.4 per cent. However, poverty has gradually declined subsequently to 27.4 per cent in the third quarter and expected to fall further to 23.4 per cent in the fourth quarter. The recovery is due to the robust performance on all three fronts-agriculture, readymade garments exports, and foreign remittances. Nevertheless, barring a second wave and a second lockdown, the average poverty rate for 2020 would still be in the order of 25.1 per cent-slightly higher than the level prevailing in 2016. It appears, then, recent gains in poverty reduction have been nearly wiped out by a single stroke of the global pandemic.

Significant progress has been made in non-income poverty indicators, with the proportion of stunted children under the age of five falling to 30.8 per cent in 2016 from being 54.6 per cent in 1996/97. Improvement has been observed in other aspects of child nutrition, childhood mortality rate, maternal health and school attendance of children.

However, income inequality has been on the rise from the beginning of the 2010s, as measured by the Gini Index. Although there are doubts about the quality of HIES's income data, the trend is rather concerning as it is slowly inching towards the 'danger level' of 0.5. Besides, there is a significant disparity in the level of poverty reduction across the country, with some districts being still ridden with poverty. Even with the average poverty rate of 24.3 per cent, the rate in Kurigram was severely high at 70.8 per cent, and that of Jamalpur was 52.5 per cent. In order to identify the poverty hotspots across the country, it is essential that the dimensions of both income and non-income poverty are taken into perspective. 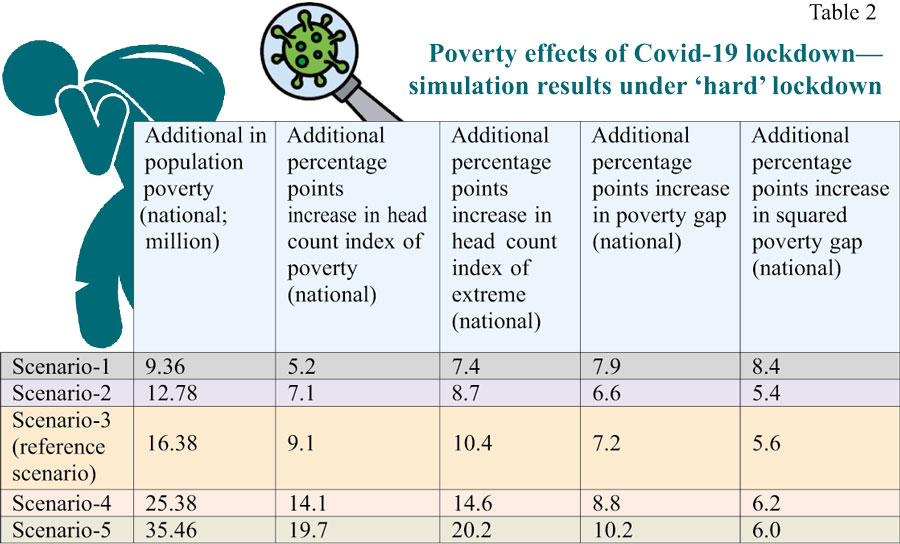 The countrywide lockdown imposed from this year's March has proven detrimental to the economy, reversing much of the advancements Bangladesh has made in reducing poverty. The Western model of an extended hard lockdown was proven to be not suitable for a low-income country like Bangladesh with very high population 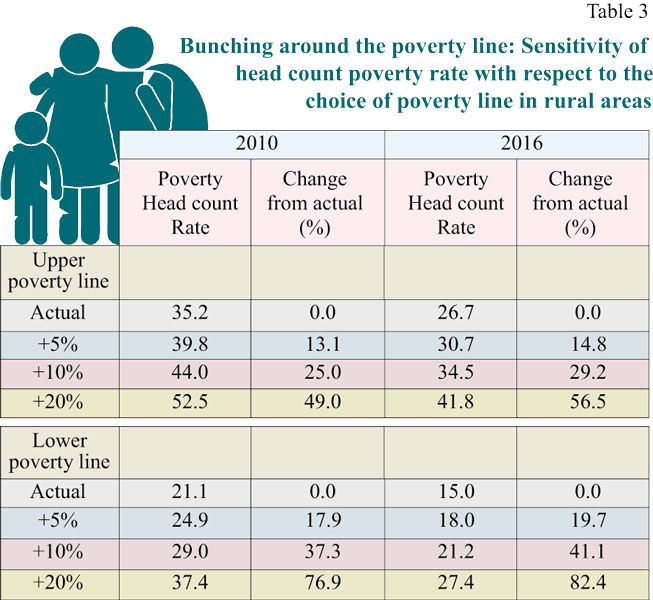 density, having a catastrophic effect on the already vulnerable population of the country. Based on the type of assumption, it is estimated that between 9.0 to 35 million people might plunge into poverty because of the shock of the lockdown. 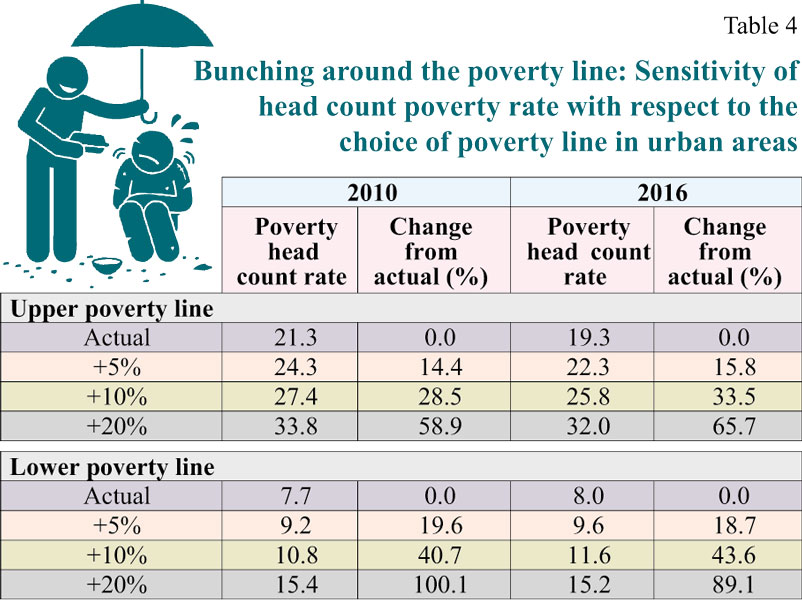 The lockdown due to Covid-19 hit the country in three different dimensions. Firstly, there is now greater bunching of the near-poor around the poverty line. When hit by a vulnerable situation, such as the pandemic, the population living just above the poverty line might plunge into poverty. This happens due to the income shocks that happen during a crisis. According to the HIES 2016 data, even a 10 per cent increase in the poverty line can result in a 29 per cent increase in the rate of poverty in the rural areas, compared to the baselines.

The idea of social protection is to serve the extreme poor and the most vulnerable in the first place. This is because the latter are often bypassed by the economic growth process and they are more susceptible to income shocks and economic downturns.

However, the social protection system in Bangladesh has been of little help to the extreme poor to compensate for their welfare loss entailed during anincome shock. This is not necessarily because of the lack of funds earmarked for social protection, though funds are clearly inadequate to the need. In fact, it is primarily because the targeting of who receives social safety net coverage is not effective, which, being a leaky pipe to begin with, largely targets people who do not qualify for the coverage.

It should be noted that pension schemes, despite being included in these categories, should not be placed under routine social security programmes at the first place. In contrast, the extreme poor have been able to claim only a quarter of the coverage in these social protection programmes.

Before the Covid-19 shock hit the Bangladesh economy, the country was well on the track of meeting Sustainable Development Goal(SDG-1) target of 'zero poverty' by 2031, by continuing to maintain an average GDP growth rate below 7.0 per cent. Even a 6.0 per cent average growth rate of GDP would have taken the country to a 2.0 per cent projected poverty headcount by 2031. Due to the pandemic, now that the poverty rate has shot up to 25.1 per cent, Bangladesh's economy needs to grow by an average of 8.0 per cent per year to reach SDG-1 by 2031, which will be a remarkable achievement. This is because according to the projection of poverty headcount, Bangladesh will be able to restore the pre-Covidstate of the economy by the fourth year of the Eighth Five-Year Plan(FYP).

The target of meeting the 8 per cent average growth rate annually over the next decade is difficult especially in the backdrop of post-Covid global uncertainties. We suggest that the government of Bangladesh(GoB) take a more egalitarian approach towards growth by enhancing the poverty responsiveness of growth(netgrowth elasticity of poverty reduction) to a level of 2.00 from 1.01, so that the pace of poverty reduction is faster for a given growth rate.

Conclusions and possible policy responses in the eighth five-year plan

With the Covid-19 pandemic wiping away significant successes of the previous years and worsening pre-existing vulnerabilities, it is essential that the GoB takes effective short and medium term policy measures over the span of the Eighth FYP, in order to get the country back on track. In the short term, the strategy should be to concentrate on the economy while keeping an eye on the healthcare system, for the latter of which there is no quick fix. Financial inclusivity of households should be increased, since only few urban poor households have access to non-land physical assets (16 per cent), financial assets (39 per cent), and account with the formal banking system (4.0 per cent), which is further limited for the rural poor population. If the population had savings or assets, they would not have been affected as harshly by the draconian "hard" lockdown, which might be essential in the western world but is not a feasible model in the perspective of this country.

In the medium term, effort must be made to improve the healthcare system, by moving towards a radical universal healthcare system. For this, the public expenditure on health should be matched up to 3.0 per cent of the GDP, which has been well below 1.0 per cent in the past two decades.

Besides, it should be noted that social protection systems are an effective tool to insulate the vulnerable population from the hits of a catastrophic situation. Increasing investment in such programmes would do little to improve the situation, where the main problem is the widespread targeting of people who do not qualify for social protection. Constant engagement with the local government along with an updated list of SP beneficiaries can go a long way in this regard.

Moreover, the beneficiaries of technology should not only be the affluent households, where the children get to study online uninterruptedly while the vulnerable households do not have that access. Internet technology needs to be made available widely and at a subsidised cost, especially among the disadvantaged populations. It is also essential that innovative ideas like wealth tax and inheritance tax are introduced to improve the sorry state of tax revenues.

Finally, to step up the poverty responsiveness of growth, income inequality should be combatted through increased agricultural/rural growth, expansion of job-creating MSMEs (micro, small and medium enterprises) in urban areas, development of secondary towns, increased female participation in high-end labour markets, wider access to human and financial capital-along with progressive income and wealth taxes. If such measures are in place, the poverty responsiveness of growth can be increased.

To sum up, the lockdown of the Covid-19 pandemic has hit Bangladesh unexpectedly, turning back the upward trajectory of progress seen in recent years. Whether or not Bangladesh can evade this calamity with success will depend largely on the measures taken during the span of the Eighth FYP.

This article is extracted from the larger research paper titled "Poverty in the Time of Corona: Trends, Drivers, Vulnerability and Policy Responses in Bangladesh" prepared for the GED, Planning Commission for the Eighth FYP.

Binayak Sen is the Research Director at BIDS.

Zulfiqar Ali is a Senior Research Fellow at BIDS.

Muntasir Murshed is a Research Analyst at BIDS.