The tragic tale of tangled overhead internet cables of Dhaka 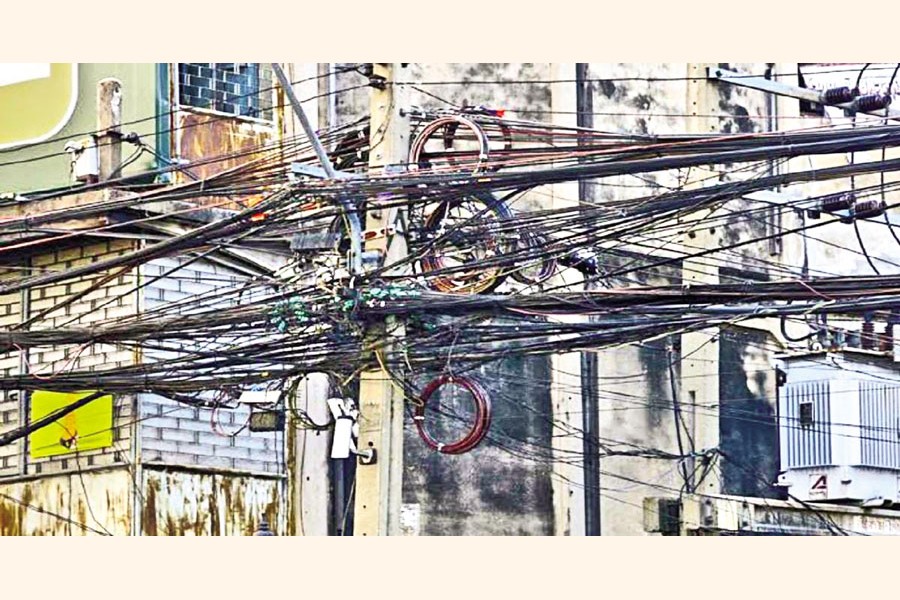 'Digital Bangladesh' is a key vision, and an election pledge made in 2008 by incumbent Prime Minister Sheikh Hasina. In realizing that pledge, Bangladesh has seen rapid growth in internet use, digital financial services, and e-commerce in the decade since then. According to the latest available statistics, 60.7% of the population of the country has access to the internet (of which about 8.57 million use broadband internet). The Financial Times recently reported that the number of e-commerce sites and Facebook-based outlets in Bangladesh is over 2,500 and 50,000 respectively, delivering about 30,000 products a day. Despite the internet proliferating across the nation, the major cities remain the epicenter of much of the online transactions. This is because high-speed internet-often available only in large urban areas ? is essential for the survival of businesses and tech-savvy home users, including home-based entrepreneurs.

Over the last few weeks, the two city-corporations of Dhaka ? the DNCC and DSCC ? embarked on a drive to rid the city of the eyesore ? the overhead cables ? including internet cable ? that provide high-speed broadband internet to different consumers in the city. There are many valid reasons for removing the "tangled aerial web of wires". These include: (i) public safety concerns ? the overhead cables can pose severe health hazards, (ii) economic concerns ? the overhead cables are an inefficient way of delivering the service, and (iii) ambiance/aesthetic concerns ? the overhead cables are indeed quite unpleasant to look at. Not surprisingly, this issue has lingered for quite some time now, with authorities taking sporadic actions ? in the form of drives or (Avijan) to resolve this mess. The two main stakeholders in this scenario ? the internet service providers (ISPs) and the regulator (BTRC and its relevant wings) ? are regularly engaged in blame-game over the last few years, resulting in a stalemate with no end in sight for this tangled web.

During the COVID-19 pandemic, the importance of fast and reliable internet has become paramount. Social distancing means that the human activities taken for granted ? like attending classes/lessons, holding office meetings, social get-togethers, etc. ? are now mostly conducted online. In fact, it is predicted that the new normal after COVID-19 will involve a stronger usage of the internet in conducting many day-to-day activities. In essence, access to reliable high-speed internet is likely to hold a key to success ? for the individual as well as the nation as a whole ? going forward. As countless commentators have already stated, the business as usual approach of blame games is not helpful, and the various stakeholders need to come together to find a holistic solution to this decade-long problem.

So, how do economists view this issue, and can they offer any solution? A novice student of economics is always introduced to the importance of the market and the price mechanism in ensuring an efficient allocation of resources. In other words, the markets ensure that scarce resources like capital, labor, and land (a staggeringly scarce resource in Bangladesh) are allocated in such a way that goods are produced at the least possible cost leading to maximum societal welfare in the long run. However, markets are not always the most efficient solution to the resource allocation problem since markets can fail ? especially in developing countries with institutional weaknesses ? and government intervention is required to correct this failure. The provision of wired broadband internet services, like the provision of most utility services, is one of those cases of a market failure. The main reason is that utility services ? like the overhead cables ? require a substantial fixed investment on the part of the service provider and, if each service provider were to build and maintain their own distribution network, scarce resources are wasted, eventually leading to higher end-user costs.

The two most common solutions to this practice are: (i) the government provides the service or heavily regulates the provision of the service to end-users ? e.g. the natural monopolies of Dhaka WASA and Dhaka Power Distribution Company (DPDC), etc., or (ii) the government creates a two-tier system where one set of firms provide the network backbone and a different set of firms provides tailor-made packages for the end-users. In this latter system, it is essential that the monopoly firm ? the one building and maintaining the network backbone ? does not sell packages to end-users. The advantage of this two-tier system is that it addresses some of the inherent problems with natural monopolies or government production which include high end-user prices, low rates of innovation (which is essential for cost reduction in the long run), and poor service quality.

What does this mean for the wire-based broadband internet sector in Bangladesh? It needs to move to a two-tier market structure mentioned above. In fact, the BTRC has made many, but often ineffective, attempts over the last few years to move towards such a market model. They created the Nationwide Telecommunication Transmission Networks (NTTN), where several companies have now been given licenses to create a backbone broadband network, which the ISPs can utilize to provide internet to the end-users. This is a standard model used in a lot of countries in the world. For example, the recently introduced National Broadband Network (NBN) Scheme in Australia authorized the NBN Corporation to provide a distribution network of connections for every household in Australia and a set of retailers provide the internet service through different packages to end-users.

Bangladesh's move towards the two-tier system, despite having potentials, suffers from several pitfalls. Firstly, firms licensed under the NTTN are not required to build and maintain an optical fiber network ? essential for high-speed internet connectivity ? at the household level. Instead, the plan is to create 'drop points' every 200 to 400 meters. In reality, these numbers are usually much larger. This requires the ISPs to still draw cables from these drop points to connect the customers. While the current plan (the NTNN) reduces some of the aforementioned inefficiencies, it continues to overlook the issues related to public safety and ambiance ? the two main reasons cited by the DNCC and the DSCC to get rid of overhead internet cables. Secondly, there is a significant overlap in service areas across firms licensed under the NTTN, which leads to wastage of resources that the two-tier system is trying to avoid. This is on top of inefficiencies generated by corruption ? due to over-invoicing, provision of lower quality products, nepotism, etc. ? and the perception of corruption ? often attributed to a lack of trust in the government's choice of service providers ? that is prevalent in most governments in developing countries.

What is the way forward for Bangladesh then? The regulation of utility services in developing countries is generally difficult and the technical challenges unique to the provision of wired broadband internet provide further challenges. As a first step, the BTRC should engage with technical experts, economists, and concerned stakeholders to create a framework that ensures that broadband internet is provided at the lowest possible price to the consumers. This involves understanding the various incentives for all parties involved and creating mechanisms to ensure everyone's long-run incentives are aligned to providing high-speed internet at the lowest possible price. It is important to note that while Bangladesh currently provides relatively cheap broadband prices ($27.35 for 60 Mbps data speed), it continues to be two and a half to three times that of India ($12.9) and Vietnam ($11.23). One of the stated goals in the National Broadband Policy of 2009 is to provide high-speed internet at affordable prices and, in that regard, more work is still required. While a move to a two-tiered system is inherently appealing, serious considerations must be made to adapt the system to the various contextual issues unique to Bangladesh. The Bangladeshi ISPs broadly support collaborating with the government to pursue and implement a meaningful solution. An anonymous owner of an ISP confides that "if the government were to find a meaningful solution to the issue of distribution of internet through underground cables, ISPs would see drastic drops in their costs of operations". This would eventually make high-speed internet more affordable and allow it to be a tool for development for the Bangladesh economy.

Honorable Prime Minister Sheikh Hasina realized the potential of digital technology back in 2009 when she endorsed the Vision 2021 perspective plan. A 'Digital Bangladesh' remains one of the top development priorities of her government. While the country has reaped many benefits of this plan through improvements in digital technology, the way in which the sector is organised and regulated is not bringing efficient market outcomes. The current spectrum of policies and incentives for various stakeholders in the internet sector is not aligned towards providing safe, secure, reliable, and fast broadband internet services at affordable prices. A wired (fiber optic) broadband network is essential in making high-speed internet affordable and ubiquitous across the nation. The BTRC should consider the tangled web of overhead internet cables as a matter requiring urgent attention and take the necessary initiatives to move to a two-tier broadband internet market over the next few years. Ironing out the failures in the wire-based broadband internet marketplace will allow Bangladesh to boost e-commerce at both national and international markets as well as the exchange of knowledge, expertise, and ideas globally. With the advent of the Fourth Industrial Revolution (i.e., automation of manufacturing processes), the main impetus for economic growth and development in Bangladesh will be reliant on faster connectivity with the rest of the World.

[Dr. Ananta Neelim is a Lecturer of Economics at RMIT University, Australia. He can be reached at [email protected]

Dr. Muhammad Shafiullah is an Assistant Professor of Economics at the University of Nottingham, Malaysia. He can be reached at [email protected]]