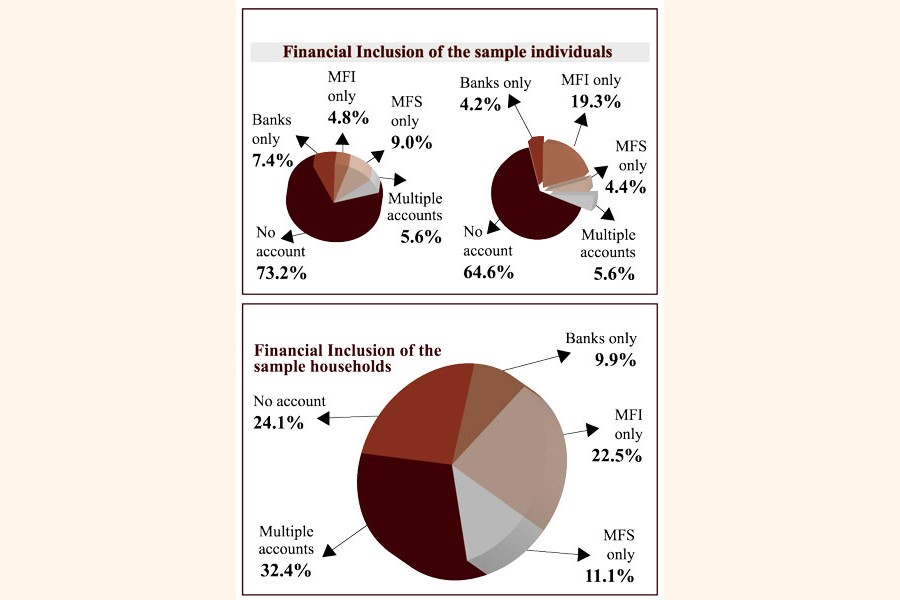 Bangladesh has embraced mobile financial services (MFS) with the aim of expansion of financial inclusion and economic development. MFS has expanded rapidly in both rural and urban Bangladesh over the past 9 years propelled by bKash Limited, a subsidiary of BRAC Bank, which has assumed the industry leadership position through a virtually unassailable lead in the market. It has a 55 per cent share of the MFS market.

The number of registered MFS accountholders stands currently at over 70 million compared to less than 30 million in 2015. However, the number of active MFS accountholders is 32.5 million compared to around 12 million in 2015. The average of daily total transactions is 6.7 million, while the value of daily transactions exceeds Tk 10 billion. Furthermore, bKash has more than 37 million customers with an active customer base of more than 17 million. MFS like bKash is now rapidly gaining traction in many new areas to make payments at shops, pay utility or internet bills, top-up money on phones, send money to government safety net beneficiaries, and so on. Bank accounts can now be linked up with the bKash accounts to make financial planning and transactions even more seamlessly efficient.

However, very few attempts have been made in Bangladesh to understand MFS' impact on people's welfare. Thus, it is in this context that the field survey for the leading MFS provider namely bKash was carried out bythe Bangladesh Institute of Development Studies(BIDS) in 2018. The study points to the considerable impact of bKash on household welfare, including income, consumption stabilisation, educational and health expenditures, and women's empowerment. 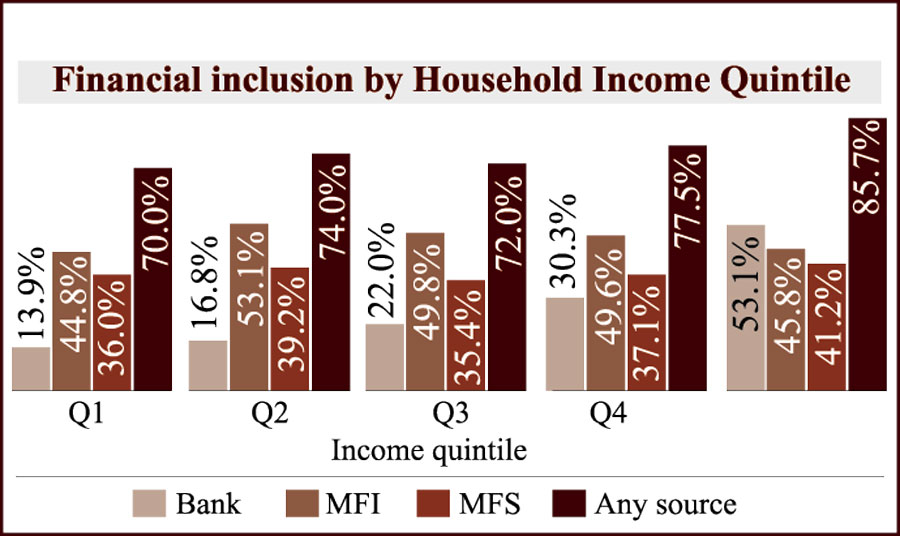 Moreover, access to finance at the household level is higher among the rich than it is among the poor: 85.7 per cent households from the richest quintile compared to 70 per cent from the lowest income quintile.

However, MFS tends to serve the rich and the poor alike. From the poorest quintile, 44.8 per cent households have access to MFIs and 36 per cent to MFS. In contrast, in the richest quintile, 45.8 per cent households have an account with an MFI compared to 41.2 per cent with MFS. The poor perform quite well in terms of MFS usage, especially when compared to the banking sector. Household survey data suggest that three MFS providers mainly serve the selected rural communities, namely bKash, Rocket and SureCash. Ninety eight (98) per cent of rural households have at least one mobile phone, but only 38.4 per cent have an account with an MFS.

As for individual MFS providers, 24 per cent households have an account with bKash only and 28 per cent have a non-bKash account. Among the households with mobile phones, 68 per cent are found to use (any) MFS, with 50.6 per cent using bKash. It may be noted that 'use' needs to be combined with frequency and volume of transactions to understand how important a particular provider is.

Who uses bKash and for what?

This is an important finding, underlining the crucial importance of consumption, which cash inflows encourage. The information gathered also points to the non-local origin of money flows to recipients, especially in the case of bKash users. For all MFS, 66 per cent of receipts are originated from outside the district- a figure that is heavily dominated by bKash at 67 per cent. Interestingly, this is somewhat higher for female recipients (70 per cent) compared to males (64 per cent).

There are some factors that influence household access to MFS. Of explanatory variables of particular interest, the findings are- male-headed households are more likely to have an account with MFS and an account with another financial service; age of household head positively affects account-holding with a bank or bKash; and education matters in influencing opening a bank account or accounts with bKash or any other financial service.

MFS like bKash has a significant impact on the efficiency of household resource allocation and hence impact household income, consumption and other indicators of household welfare by transferring money in an efficient, fast and secure manner. The descriptive statistics of selected outcomes of interest shows that household per capita total expenditure for bKash users is Tk 3,126 per month, compared to Tk 2,580 per month and Tk 2,887 per month for non-bKash MFS users and nonusers of MFS, respectively.

Income and consumption-smoothing effects of bKash

The use of bKash has a smoothing impact on income and consumption- but mostly on the former. For households who were exposed to shock but did not have bKash, domestic remittances declined by 61.6 per cent, and consequently, per capita income declined by 17.1 per cent, but without any significant impact on per capita consumption. For households who were exposed to a shock and did use bKash, domestic remittance increased by 60 per cent, and as a consequence, per capita expenditure increased by 6.2 per cent and income increased by 28.1 per cent. This is the risk-mitigating role of bKash: it helps smooth income and consumption of households exposed to any shock. Responses to shocks appear to be particularly pronounced for health shocks and floods.

In the following study, a total of 246 transactions were recorded relating to money sent to students outside the locality. Around 54 per cent of these are sent by bKash while 40 per cent were delivered physically. Thus, on average, Tk 1,549 was sent in a year to a student by his/her household. For households which use bKash, this was Tk 2,807 while for households which do not use bKash, this was Tk 290. It suggests that the traditional form of sending money physically has already turned into a meagre flow.

Compared to non-MFS users, MFS-using households spend significantly more on education (Tk 7,278 vs Tk 4,169), a difference of over Tk 3,000. Between the bKash-users and non-users, the difference is sharper by almost Tk 4,300. The 'Instrumental Variable' or IV approach shows that bKash adoption has a significant impact on educational expenses met by households. BKash adoption leads to a 48 per cent increase in educational costs, while MFS adoption (including non-bKash MFS usage) results in a 45 per cent increase. Note that bKash played a significant role in the government's secondary education stipend programme (SESP) during 2017, 2018 and 2019.

On average, bKash-using households report a total of 10.7 days of illness suffered by members per annum compared to 10.3 days for non-bKash households. However, interestingly, bKash-using households are more likely to seek consultation with a medical professional compared to non-users. On average, bKash users spend Tk 1,658 per annum on medical treatment while non-users spend Tk 1,138. The adoption of bKash or bKash use stimulates health expenses to rise by 54 per cent. And it is 47 per cent in the case of all MFS taken together (including bKash).

The study assessed empowerment through a number of qualitative and quantitative indicators. It includes women's freedom of movement outside home, their role in household and financial decision making, their participation in income-generating activity (IGA), earnings from the labour market, and ownership of assets like jewellery and monetary savings. In all indicators except for one (namely, their role in economic-financial decisions of the family), the impact of bKash was positive and significant. BKash has a significant impact on women's welfare. The use of bKash increases women's ownership of assets by 14 per cent and women's engagement in IGA by 9 percentage points. From the findings, it can be seen that a 10 per cent growth in the amount received through bKash increases women's asset by 2.1 per cent and women's engagements in IGA by about 1.1 percentage points.

This study has unearthed quite an impressive set of findings related to the operations of bKash and its impact on a wide range of outcomes. It has a significant impact on income and savings. At the same time, it demonstrates a strong effect on household welfare through mitigating fluctuations in income and consumption and reducing risk when faced with shocks. Outcomes recorded on social factors like education, health and especially women empowerment were strikingly impressive. Given the considerable potential for further development, the evolution of MFS augurs well for Bangladesh's development objectives, and entities like bKash will certainly see the rapid expansion in scale and turnover as fresh markets are explored. However, this will require incentives to be fine-tuned.

[Bangladesh Institute of Development Studies (BIDS) published the report titled "Impact of mobile financial services in Bangladesh: The case of bKash" in September 2020. This article presents the key findings from the report.]

KAS Murshid is the Director General of BIDS. [email protected]

Shahid Khandker is a Consultant and Senior Economist.

Khondoker Shakhawat Ali is a Consultant and Senior Sociologist.

Hussain Samad is a Consultant and Economist.

Monzur Hossain is a Senior Research Fellow of BIDS.