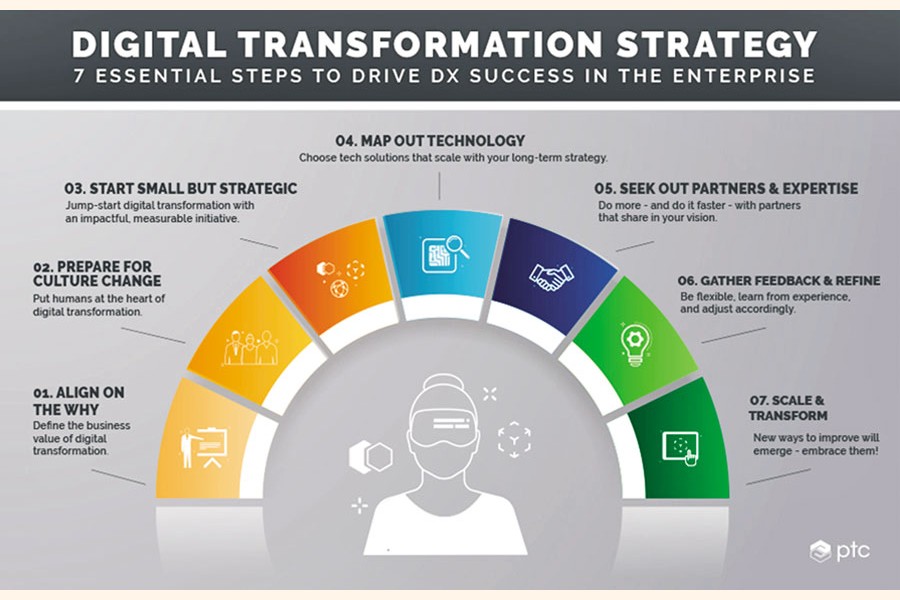 There would be a few readers who would be unaware of the hype 'Digital Transformation' [DX]-a Google search on the phrase would produce nearly half a billion results. This seemingly meaningless buzzword for some time has become a critical ingredient for today's success and tomorrow's survival of organisations - across the industry and geography.

Consumers have evolved in the last 150 years and their adoption of different breakthroughs clearly shows that. Telephone [invented in 1874] took 75 years to reach 50 million users while Radio [1890s] took 38 years and Television [1927] took 13 years to reach the same number of users. Fast forward to recent times: Internet [worldwide web invented in 1989] took only 4 years to reach 50m users while Facebook took 2 years. And to put the current consumer adoption into perspective: Pokemon go, the AR game took 19 days to have 50m downloads! Yes - if there is any doubt about the smartness of CXOs jumping on the DX bandwagon, that's the landscape organisations are trying to be ready for.

No wonder companies feel perplexed to intervene and do something. If it is not the digital disruption that compels them to transform, it is often the digital 'FOMO' means Fear Of Missing Out. It doesn't come as a surprise that worldwide spending on the technologies and services that enable digital transformation is forecast to reach $2.3 trillion in 2023, according to the International Data Corporation (IDC) Worldwide Semiannual Digital Transformation Spending Guide. DX spending is expected to steadily expand throughout the 2019-2023 forecast period, achieving a five-year compound annual growth rate of 17.1 per cent.

Naturally, many transformative success stories have emerged in recent times; but there have been a fair share of road bumps as well. Lego defunding its Digital Designer [LDD] virtual building programme or Nike halving its digital unit by discontinuing its Nike+ Fuel band in 2014 does indicate that it's not all that easy!

If the DX investments are purpose-led and designed to create intrinsic value for customers or consumers, companies might find it easy paying the bills for it. While there are global disruptive models like Amazon and Uber built on these principles, lesser well-known but similar disruptive ideas have emerged in South Asia as well. The story of Rivigo is particularly compelling. Deepak Garg, a soft-spoken 35 year old man who was exploring his entrepreneurial ambition post 8-year stint in McKinsey & Company, thought of creating a freight market place in India back in 2014. In a $96b freight transportation industry where over 90 per cent operators owned fleets of six or less vehicles and average truck mileage was one sixth of average US truck mileage due to inferior highway infrastructure -there was clearly a problem to solve. But Deepak quickly realised that the primary bottleneck in the Indian trucking industry was driver shortage. Estimates were showing that this scarcity could hit 50 per cent by 2020 with the rise of e-com. Now an economist would say: if the demand exceeds supply, wages will rise and soon the demand-supply gap will reach equilibrium. But surprisingly that didn't happen. Deepak travelled through small towns or villages of India to figure out the phenomenon; he realised that people didn't want to sign up for the job because of the daunting work hours even if the pay was good. Drivers work for 15-18 hours a day on accident-prone highways, do not come back home for days, thus becoming social outcasts. As they spend most of the time on the road: they get involved in all kinds of bad habits. As a result, nobody in the village wants to marry their daughter to a truck driver, no one wants their son to become a truck driver. So, it was quite a deep-rooted societal issue; not a mere economic one. Now how did Deepak solve the problem? The root cause of the problem is: the truck drivers are always on the road. They need to be sent home every night. So, Deepak created a relay system: a truck driver drives for four hours from point A to B & picks up another truck at point B and bring back to point A. So, it becomes an eight hour shift but it's a relay. Someone else picks up the truck at point B and drives to point C. This goes on until the truck reaches its destination at point Z. And all of this was managed through a crude mobile app with proprietary algorithm at the back end with data across route geo-locations, driver productivity, fuel efficiency, etc. As a result of this relay system, every truck driver can come back home after work every day. Naturally, people started signing up for the system; some even willing to join at a pay cut. It also unlocked another opportunity for the shipping companies-in previous system, the same driver was driving the truck. So, there would be a downtime for around half the day as the driver needs to sleep and take interim breaks. Now, with the relay process, the trucks can keep running and the shipping time can come down by 50 per cent! Now, that is a purpose-led disruption and Deepak Garg's Rivigo today operates with 4000 drivers and 2100 trucks and already raised $100 million funding.

There are challenges to solve through technology in Bangladesh market as well. For example, 'retail micro-merchants' are not so widely spoken a segment, which contributes as high as 13 per cent of Bangladesh GDP as per CPD's 'State of Bangladesh Economy Report'. UNCDF report says: a stark 67 per cent of these micro-merchants earn below $2.5/day. Over 60 per cent of them have borrowed money in last 12 months; The IFC SME Finance Gap Study also says 55 per cent of MSMEs are partially financially constrained while 39 per cent are fully constrained. Obviously, a lot is to do with the inherent apprehensiveness in a micro-merchants' mind to borrow from financial institutions through collateral or formal documentations. Unilever as a big supplier to these micro-merchants wanted to play a part in solving this problem through a win-win solution for all. Through DX investments in the last few years, the consumer goods goliath has its end to end distribution process automated till the last mile. That brings down the risk for any financial institutions if they want to extend credit to micro-merchants through Unilever tech ecosystem. Technology allows all the steps involved in credit rating, credit approval to repayment to be completed on the merchant's mobile phone itself. So, this enables the micro-merchants to avail working capital without any fear sitting at his shop and they can order products basis what they can sell, not constrained by what they can buy. Multiple financial institutions have already shown their intent to partner in the agenda; this can prove to be a great unlock for this sector. This shows that a purpose not only ensures the economic viability of a DX model but can also inspire a broader partnership framework.

While it remains to be seen how DX initiatives evolve across geographies and how it transforms the Bangladesh market in the coming years, initiatives designed with purpose and intrinsic consumer value built into it will surely have higher chance to succeed.

Md. Shadman Sadikin is working as Head of Digital Hub & Centre of Excellence, Sales & Marketing at Unilever Bangladesh Limited. He also works as an adjunct faculty at the Institute of Business Administration, University of Dhaka.