Deposit still constitutes the biggest source of fund that forms the lending capacity of our banks. Deposit is a great blessing for the economy. Enhancing deposit is always an urgent agenda for the banking sector not only for lending in sheer literal sense, but also for contributing towards drive for reduction of economic inequality. In micro sense, deposit generally manifests one's wealth. Too much wealth concentration cannot maximize welfare in the society. Mobilizing deposit from all possible individuals and institutions is a legitimate interventional strategy that creates excellent opportunities to deploy the vast pooled resource for distributive justice and inequality reduction.

Our GDP has been constantly growing and crossed 8.00 per cent annual growth rate in FY 2019 though the rate slided to 5.24 percent in FY 2020 owing to the adverse impacts of Covid-19.

Is bank deposit growing in proportion to GDP growth? How can we explore more sources of deposit mobilization? Can we say that all the major stakeholders' expectations about deposit being minimally satisfied? An analysis of deposit growth, grievances of depositors, categories of depositors, and inter-bank performance over the last decade has been presented here to deal with the question raised. 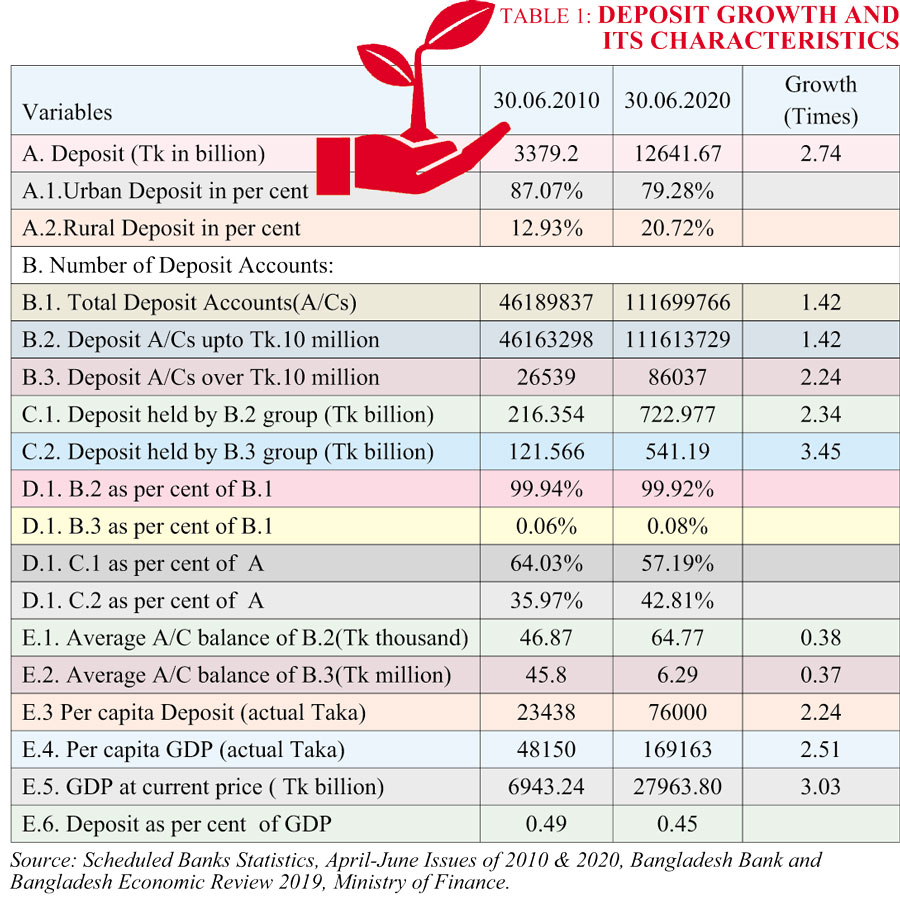 • Deposit growth in the banking industry is nearly in parallel with GDP growth, which is evidenced both by rise in GDP (Taka volume) and deposit to GDP percentage.

• Deposit mobilization ratio from rural areas has increased over the decade.

• Proportion of opening or maintaining deposit accounts has substantially risen in view of our population though a firm or an individual or any organisation holds more than one account. However, it indicates growing savings behaviour. The banks operate more than 110 million deposit accounts.

• The depositors have been categorized into two groups, one having deposit of Tk.5000 to Tk.10 million and the other having deposit of more than Tk.10 million. The first group consists of mainly lower and middle income people or organizations and the second group consists of organizations and individuals of highest income levels. Almost all the accounts (more than 99 per cent evenly over the decade) are owned by the first group. The number of accounts of the second group ranges from 26539 (FY 2010) to 86037(FY2020).

• The average balances per account of both groups increased over the decade. Deposit growth rate of the second group in FY 2020 is higher than that of the first group by 111 percentage points. The average deposit size of the second group is 970 times bigger than that of the first group in FY 2020.That per capita deposit growth (population-based) grew at a rate far less than that of GDP gives some indication of rising economic inequality.

Table 2 shows that there is substantial variation in growth rates of deposit mobilization over the decade in several banking groups. Islamic Banks ( IBs) registers the highest growth surpassing that of GDP while the lowest rate of growth is shown by the 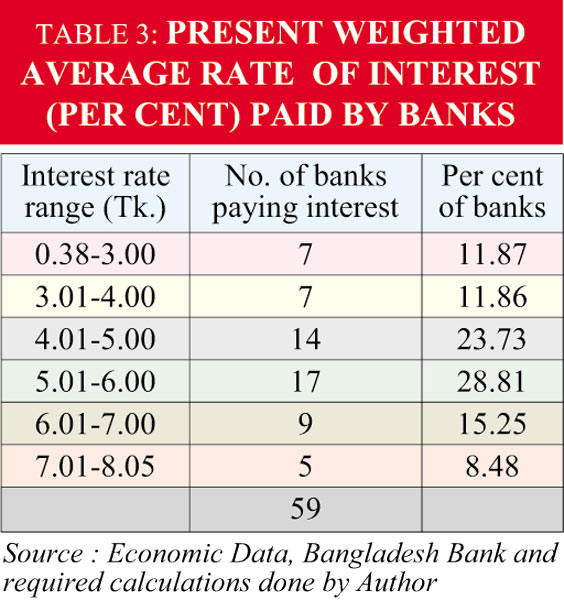 government-owned specialized banks (SBs). The SOCBs' deposit growth lies much below that of GDP.

However, private sector commercial banks (PCBs) have been able to remain in parallel with GDP growth rate and to outperform sector's average growth rate in terms of their deposit enhancement drive.

It is observed from Table 3 that 76 per cent of the banks are complying with the government -announced deposit interest of maximum 6 percent while 24 per cent of the banks have surpassed the ceiling by a great margin (even at 8.05 percent offered by a bank). About half of the banks pay interest on deposit within the range of 0.38 per cent to 5 per cent. Foreign banks' average rate is 1.72 per cent (individually from 0.38 to 5.76). Millions of depositors are being severely deprived of due return (even at govt.-declared 6 per cent) on their deposits as they are neither safeguarded

by any regulation nor they have any bargaining power in the so-called market mechanism.

Table 4 exhibits that over the decade, the state-owned commercial and specialized banks have reduced their both the proportion and the number of rural branches while private commercial banks increased the number of their rural branches by 136.51 per cent and the proportion too has risen from 33.29 per cent to 36.30 per cent during the period of 10 years. Branch network has been expanding but slower progress in extending rural banking facilities is observed while we are going to celebrate 50th anniversary of our independence.

It is not possible to raise the level of deposit without strategic planning. Strategies would have to be tailored to fit the situation, product offer, price, customer, region, rival's strategies, regulation, capability and so on. Depositors are banks' highly valued customers as they add life-blood to the

banks to start up and carry on banking operations. Who are the depositors or who actually deposit their fund in the banking channel ? Historical data can provide us with the categorical answers. 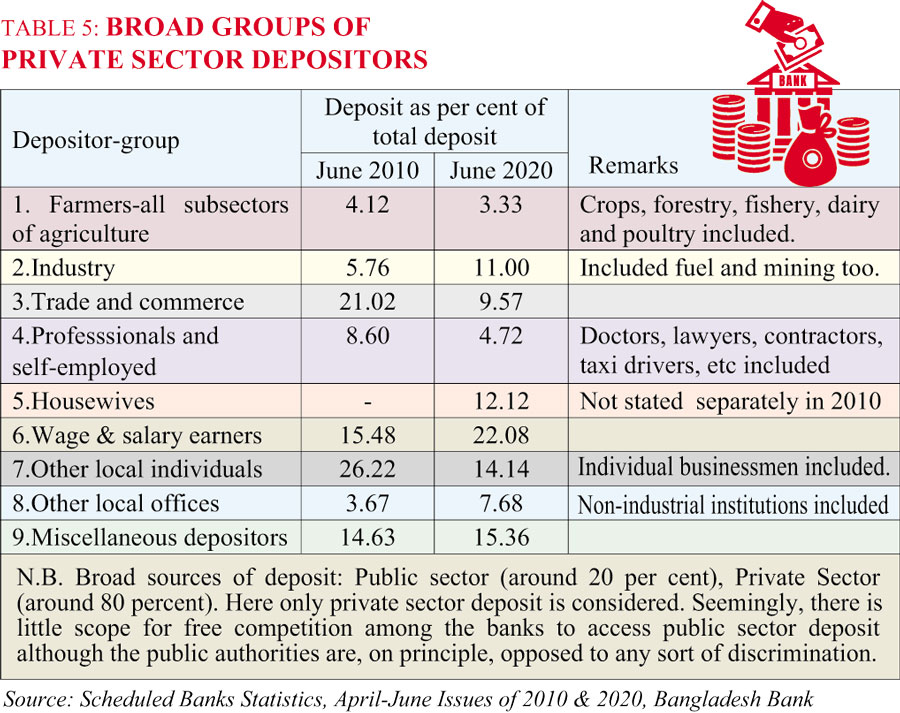 Table 5 indicates that there have been changes in the type of depositor-groups, and the proportions of group-wise deposit mobilization over the period of 10 years. Deposit proportion from all kinds of farmers or farm operators (on individual basis) engaged in crops, horticulture, and forestry, animal farming and fishery has come down. This declining trend seems to be somewhat associated with the relative shrinking down of the scale of rural banking operations. Ratio of deposit from industrial enterprises has doubled , but not in proportion to the value of industrial GDP which grew 306 per cent over the decade. It is not understandable that deposit made by trade and commerce sector has alarmingly gone down while the sector's GDP rose about 2.5 times. GDP-based analysis is not possible for other categories of depositors (from serial 4 to 9). Housewives have emerged as one of the significant depositor-groups, the category of which was not separately identified and reported in FY 2010.The single largest depositor -group is now-a-days the salaried people. Categorization needs to be recast and ambiguity or overlaps should be removed.

Expectations on deposit sharply vary among several stakeholders. Banks welcome more and more deposit at a minimum cost or interest. Depositors expect maximum rate of interest or return on their deposit, fund safety and quality services with sustainability. The government expects the businesses to be run at the lowest possible cost of financing. The regulatory body has to comply with the fundamental intentions and instructions of the government. After all, the divergent expectations of the depositors and the banks particularly regarding the interest rate are settled up unilaterally in favour of the banks through adoption of administered approach. However, we are fortunate enough that we can breathe a sigh of relief as deposit has been growing less or more despite COVID-19 outbreak and low interest rate. Unfortunately, poor rates of interest paid to depositors seem to matter a little to other stakeholders.

The pooling of savings or fund (finally transformed into deposit) by banks is needed most, but the banks would do a great job if they carefully make available the huge deposit to the needy and worthy entrepreneurs. Thus the banking industry has the opportunity to contribute a lot towards concerted efforts for reduction of economic inequality. But the paradox is that our economy is basically being run by the private sector under the doctrine of market economy but the pricing of banking products and the ownership structure of some banks are still under the directed regime. Effective and insightful governance can ensure sustainable and higher rate of deposit growth, reform state-owned banks, utilise pooled savings for equitable allocations among numerous business units, and rationalise rates of return to depositors. The issue of overall banking governance is now reserved for future discussion.

Haradhan Sarker, PhD, is ex-financial analyst at Sonali Bank & retired professor of management. He can be reached at [email protected]