BRR: A matter of minutes that takes uncounted working days 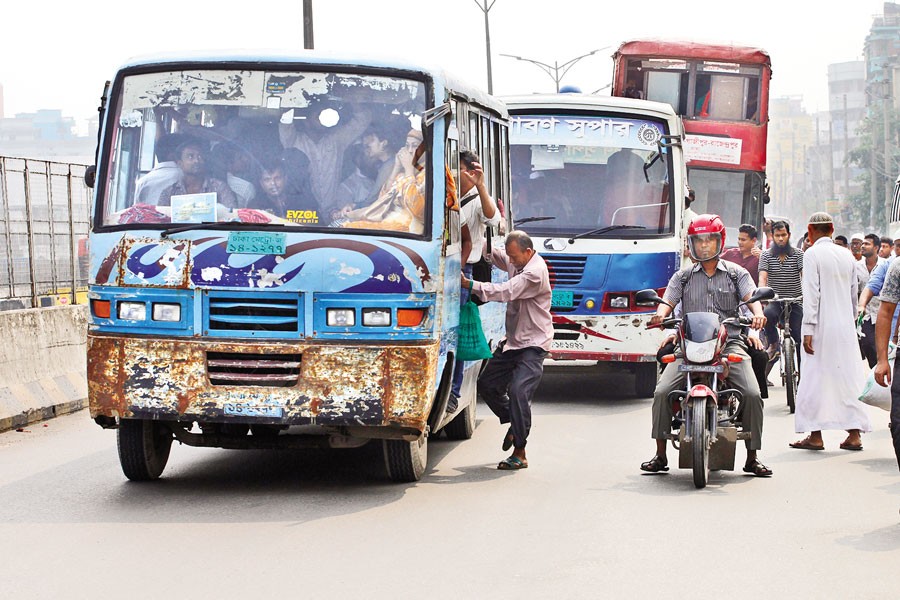 That bus route rationalisation (BRR) is not possible in the Dhaka city is a common public perception, a perception which has come out of the experience people have gathered by witnessing the city's chaotic traffic, indiscipline and union-controlled transport sector.

Both bus owners and workers are reluctant to accept rationalisation of bus routes and provide services for all kinds of passengers. The political context doesn't either favour the people's demand for improving the city's bus services.

However, a move initiated by late mayor Annisul Huq five years ago has slowed down by this time. Annisul Huq tried to reorganise all city buses under six companies but he suddenly died in December 2017. His move had made many optimistic about modern, comfortable city bus services as he announced to replace 4,000 buses with modern and air-conditioned ones with different colours for operations on six routes. The initiative was part of the BRR process.

To work on Annisul Huq's plan, the government later formed a special committee, which is yet to show the results. Actually, this specialised committee was formed in the wake of the unprecedented student demonstration in August 2018 demanding safe roads after the death of college students in road crash near Airport Road in July. The government had hurriedly enacted the Road Transport Act which was shelved for years. Like lax implementation of the RTA, the BRR still remains an idea.

Sayeed Khokon, another former city mayor,had been assigned as the head of the 10-member committee to implement the dream of Annisul Huq. Almost invariably after all the committee meetings, Sayeed Khokon assured people of launching the company system of bus service by rationalising bus routes within a year.

However, his successor and current Mayor of Dhaka South Sheikh Fazle Noor Taposh expressed frustration at the inability to show any pragmatic progress after attending the first meeting chaired by him in October.

So, the public perception of the BRR is not far from the reality.

Why BRR is necessary in the city: This mega-city is experiencing the highest-ever growth of inward migration and plying of public transports each day. The existing bus services just cannot meet the demand. So the BRR could help ease the city's traffic congestion by identifying right routes, reducing unwanted number of buses now operating in different routes. It is supposed to provide desirable bus services of better quality.

The drivers who are mostly illiterate and hardly trained are supposed to get proper salary and services under the company-run bus services. The government, too, has a strong role in supporting the companies in case they face unusual situation like fuel cost hike and ensure regulatory surveillance to ensure fair play.

The BRR and BRF are supposed to bring discipline on the streets and comfort to commuters. The bus companies are also expected to focus on improving services to passengers including elderly and physically challenged ones as the operators would not compete with each other for passengers.

The BRR would also have helped reduce the use of private cars and withdraw undesirable number of small and non-motorised vehicles from the city streets. Many middle and even upper middle class commuters prefer motorcycles or battery-operated or paddle-ridden rickshaws due to lack of proper bus services.

How is it possible: It's possible, simply by merging small and medium bus companies with big ones, and in some cases, allowing them to withdraw buses from the streets through negotiation and providing proper compensation and financial benefits. As of today, there are bus companies which run only few buses on a route. Also, one bus is owned by more than one persons. So, rational financial packages for this kind of bus operators might lessen the number of companies and undesirable number of buses.

This simple thing cannot be simple as and when the transport sector is controlled by people, who are motivated otherwise. Even the authorities concerned have not been able to motivate the operators to join a noble initiative since 1990s.

According to the latest study by Dhaka Transport Coordination Authority (DTCA), some 2,500 companies are running more than 9,000 buses on 291 active routes. But the number of approved routes is 366. This number continued to increase ignoring directive from the BRR committee not to endorse any more bus routes.

The Regional Transport Committee (RTC) formed under the Bangladesh Road Transport Authority (BRTA) approves the route permits upon study of applications from interested bus owners. The RTC's technical committee is headed by the Commissioner of Dhaka Metropolitan Police (DMP) and its members mostly include president and general secretary of different transport owners and workers associations.

So, political influence dominates the process. There is no scientific way to select or approve bus routes in mega-city Dhaka. The bus owners get easily route permit. Such practice also limits the number of buses against each company, allowing around 25 buses on a certain route. This number is fixed based on assumption, no scientific study. Some influential bus owners even sell their route permits allowing others to run their buses. For that reason, buses are found chasing each other damaging bodies of buses. For example, more than 200 buses run on Pallabi-Motijheel corridor as operators managed to secure 70 route permits showing different pickup and dropping stations.

In absence of engineers or technical representatives in the RTC, it is hard for generalists to study relevant matters while giving approval to route permits.

All those studies emphasised the bus network as nearly 70 per cent of the city trip are generated through buses and mini-buses. The rationalisation of route can ensure transit-oriented development (ToD) for passengers of mass transit including MRT and BRT to reach their destinations by using the correct route. The data on people's movement towards school, office, shopping centres or any other important places are supposed to dominate the selection of routes.

Political influence matters more than providing public services by ensuring professionalism in public transport sector. DTCA and other organisations have tried several times to bring the sector's players to negotiation table but to no avail. Scope of investment of undisclosed money, mostly earned allegedly by members of law enforcement agencies, is known to all. So such elements would feel threated if BRF is put into practice. A section of political leaders also fear loss of their earning from footpaths and streets if the BRR and BRF are introduced.

New hope with challenges: After revising all the aforementioned studies, the DTCA has recently suggested formation of 22 companies to operate buses on 42 routes under nine clusters in the city and its suburbs. It recommended 21 multi-modal and interchange stations for transferring passengers on different directions by selecting desirable modes of transports. These buses would be running in nine different colours on 42 routes.

The Taposh-led committee has asked the DTCA to finalise the routes after discussing with stakeholders including transport owners and workers, police and regulators. However, the DTCA is yet to finalise the financial model. It is working on designing priority routes for piloting and replacing existing bus terminals and on institutional development to regulate the companies.

Still the challenge remains as to how the simple work would be done within the shortest possible time. If one group of transport workers and owners respond to the DTCA's calls, another does not. The DTCA has control over the associations and unions which are relatively less politically powerful. In absence of authority, the DTCA cannot issue show-cause notice upon the non-respondents although its board members are the heads of all government agencies and stakeholders in the transport sector.

The road transport and bridges minister is the chairman of the board while two mMayors of Dhaka South and North city corporations are vice chairmen. Members include chairman of Rajdhani Unnayan Kartipakhya (Capital Development Authority), BRTA, Bangladesh Road Transport Corporation, Local Government Engineering, DMP, the home ministry and the Bangladesh Railway. The board decisions on specific issues have binding obligations for all.

In reality, the BTCA is bypassed in taking many important decisions. So, political will in this regard is found to be questionable. The DTCA's latest study recommended piloting a BRF on North and South corridor early next year. But there is no guideline to withdraw innumerable buses from the route from Bosila to Narayanganj through Mohammadpur and Motijheel.

The DTCA had in 2012 introduced a BRF system bus service from Abdullahpur to Azimpur but could not operate it successfully due to failure to withdraw buses, mini buses, tempoes etc., from the corridor. As a result, the company named Association of Bus Company could not operate profitably and stopped the service.

Understanding of the stakeholders in terms of bad impact of operation of bus services is important. The time loss, trip loss and financial loss caused by unfair competition among transport operators are needed to be highlighted with data to let them realise the consequences. They need to be convinced that they would gain similar financial benefits in the changed situation. For example, as drivers are major victims of accident and indiscipline streets, it is necessary to focus on their financial loss and health hazards they face. The unwanted expenditure they bear due to illegal stoppage of buses, hiring two to three assistants need to be highlighted. Thus they can understand benefits of an acceptable bus services and how they can lead a healthy life.

Munima Sultana is a Special Correspondent at The Financial Express.