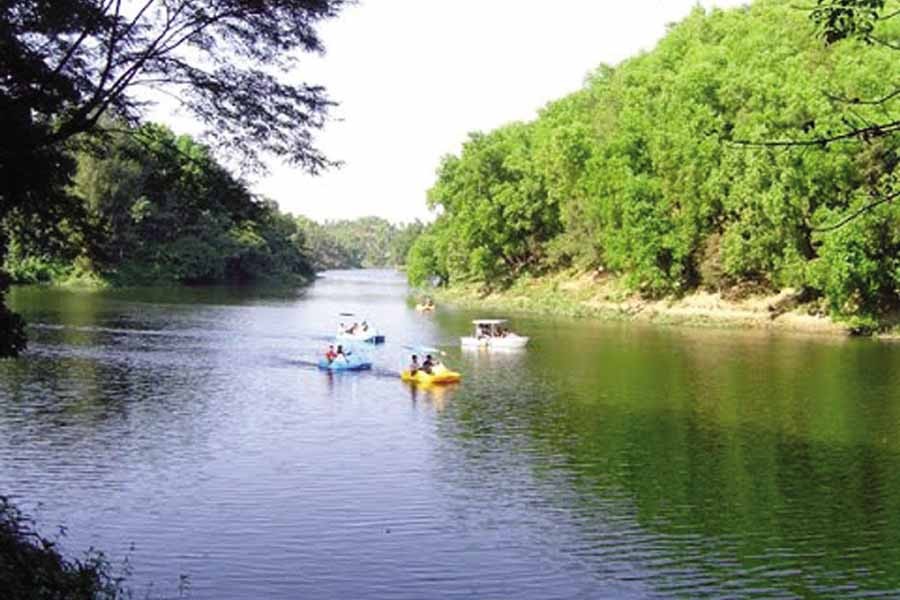 Chattogram is the second largest town in Bangladesh situated near the Bay of Bengal and endowed with the country's prime seaport and commercial hub. Its green hills and forests, its broad sandy beaches and its fine cool climate always attract the holiday-markers of home and abroad. Chinese traveler poet Huen Tsang (7th century A.D) described Chattogram as "a sleeping beauty emerging from mists and water" and Portuguese seafarers had given the title of "Porto Grande" to Chattogram. There are a lot of tourist spots in Chattogram to entertain the tourists. Some major tourists' spots are described below in brief.

Foy's Lake: Foy's Lake, the country's leading and one of the international standard tourist spots surrounded by eye-catching natural beauty and artificial amusement structures, is located at the heart of the port city. One can reach Foy's Lake from any corner of the port city by hiring an auto-rickshaw or a rickshaw or a taxicab and even boarding a public bus plying the Route Number-4.

Here almost all amusement facilities like lakeside pathway to walk on and enjoy the natural beauty and attractive boats for enjoying the lake water cruise are available to make the tour enjoyable. Apart from the natural beauty, a lot of funny things like bumper car, circus train, baby carousal fair's wheel, yellow dry slide and water slide in lake's Amusement Park make the visitors from kids to youngsters really sportive.

The visitors can enjoy the amusement facilities by spending Taka 10 to 140 each to make the journey exciting.

Water Park: It is the latest amusement destination for the tourists on another side of Foy's Lake. The tourists of all ages can take a bath or get thrilled in this park. One can reach the park through the Foy's Lake by boarding a boat or by road.

However, the park is enriched with the country's lone Revolving Tower (233 feet). The visitors can get an overview of the entire port city from this tower and also enjoy eating at the moving restaurant of the tower.

One can easily reach the park boarding any of the buses plying the route numbers-10, 9, 2 and 1, rickshaw, auto-rickshaw, taxicab and private car from any part of the city.

Patenga Beach: The visitors can take a drive to the Patenga Beach, one of the major tourist spots of the port city, located only 22 kilometres away from the heart of the city. The beach with waves of the Bay of Bengal tumbling down violently against the shore and the sunset attracts huge visitors from home and abroad every day. The visitors can also enjoy the eye-catching scenery of Naval Academy, river Karnaphuli and Shah Amanat International Airport located within one kilometre of Patenga Beach.

War Cemetery: Located at a quiet and picturesque place of the city's Amirbag area and within walking distance from GEC Square, heart point of the port city, in this cemetery over 700 warriors from Britain, Australia, Canada, New Zealand, India, Myanmar, East & West Africa, the Netherlands and Japan who laid down their lives on the Myanmar front during the 2nd World War lie buried. The silence of the graveyard gives the visitors a feel of tranquility.

Ethnological Museum: Located at city's commercial hub Agrabad the museum gives the visitors an impression of the country's tribal cultures and lifestyles and heritage.

Zia Memorial Museum: Former President of Bangladesh and founder of Bangladesh Nationalist Party (BNP) Ziaur Rahman was assassinated by a group of disgruntled army men in 1981 in this artistic building previously named as Chattogram Circuit House. To the memory of Zia, the Circuit House was later declared as Zia Memorial Museum. The visitor can see the killing spot of the late President and his daily usage and lifestyles in the scenic museum building. It is located just opposite the city's MA Aziz Stadium.

Sitakunda Eco Park and Chandranath Temple: The Chandranath Temple and the country's largest Eco Park are located in Sitakunda hilly areas just beside the Chattogram-Dhaka highway and a drive of 37 kilometres from the port city. Siva-Chaturdashi festival is held in February every year. Thousands of Hindu pilgrims from home and abroad assemble during the ten-day festival. The visitors with huge stamina can enjoy the steer ridings to go to Chandranath Temple located atop the hill one and a half an hour of walk away. Reaching the Temple the visitors can also enjoy the beauty of the sea as well as the eye-catching scene of hills.

The most exciting site of the area is Eco Park where the country's two major natural waterfalls named 'Sahosradhara' and Suptadhara located. The visitors can enjoy the natural scene of the park and take a bath in the waterfalls.

Parki Beach: Parki Beach is situated in Anwara Upazila and only 16-17 kilometres away from the port city. The visitors can enjoy the sandy beach which is guarded by Jhau Garden, as well as the big ships anchored at outer anchorage of the Chattogram port, fishermen catching fish in the sea, coloured crabs and sunset.

Bhatiary: The unique tourist destination of Chattogram is Bhatiary. Its eye-catching scenes including deep lake, hilly zigzag road, golf club, sunset and sunrise point and Bangladesh Military Academy always enthrall the tourists. Only 15 kilometres away from the port city, the visitors can reach the tourist destination hiring taxicabs, auto-rickshaws or private cars.

Cox's Bazar: Cox's Bazar, the tourism capital of Bangladesh, is enriched with miles of golden sands, towering cliffs, surfing waves, rare conch shells, colourful pagodas, Buddhist temples and tribes and delightful seafood. It has the world's longest beach. Its water is good for bathing and swimming and the sandy beach offers opportunities for sun-bathing. The visitors never forget the beauty of the sun setting behind the waves of the sea.

Thousands of tourists from home and abroad visit the world's longest beach every year.

Himchari and Inani Beach: Himchari is famous for its waterfall while Inani beach is famous for the rock and coral boulders. You can plan a trip to Inani beach via Himchari for a half day or may be a full day sightseeing from Cox's Bazar.

Moheshkhali Island: This is one of the attractive islands of Cox's Bazar. Famous Adinath Temple and Buddhist Pagoda are located here. The visitors can reach the Island boarding local motorboats or speedboats. You will find mangrove forests, hilly areas, salt field, etc. here.

St. Martin's Island: The panoramic view of this coral island attracts huge tourists around the year. Only a 30-kilometre drive away from Teknaf of Cox's Bazar district you can reach the island by tourist boats and sea trucks. In this island, you will find the beautiful coral reef and a long coral beach and lots of coconut trees. Recently the authorities concerned put a ban on passing night in this island in the greater interest of maintaining its ecological balance.

Cheera-dwip: During the time of high tide it seems to be another island but it is a part of St. Martin's Island. In this Island you will find the Corals - living and dead all over.

Rangamati: With varieties of tribal cultures, lakes, waterfalls and hanging bridge, the hilly district Rangamati attracts huge tourists from home and abroad round the year. Only a drive of 77 kilometres from the port city, the green fields and winding hills will take you to Rangamati. You can visit the tribal villages, Chakma King Palace, Rajbonbihar pagoda, Tribal museum, Shuvalong waterfall and make a journey by boat on Kaptai lake.

Kaptai: The main attraction of this area is Kaptai Dam built in early sixties for generating power and the country's largest lake.

Khagrachhari: This hilly district is the natural wild beauty of Bangladesh. Here you can visit the lifestyle of different tribal communities and Alutila hill which have a dark cave around 100 metres long.

Bandarban: This hilly district has turned into a major tourist destination of the country mainly for its natural beauty including waterfalls, River Sangu, lakes, and the tribal cultures. Chimbuk hill, Nilachol, Meghla, Nilgiri, Shailapropat, Boga Lake, highest hill of Bangladesh 'Bijoy Tajingdon', and Gold Temple are the major attractions of Bandarban.

Tourists can enjoy the journey to Chimbuk Hill by the jig jag hilly roads. It's the third highest mountain in Bangladesh, approximately 3000 ft high. If tourists want to touch the clouds, they can go to Nilgiri, 48 kilometres away from Bandarban headquarters.