Covid-19 lockdowns: A test for mental well-being of older adults

The Covid-19 pandemic and imposition of lockdown have changed the modal choices and mobility pattern of the older adults in Bangladesh. The restricted mobility has also influenced the psychological well-being of the older adults amid the pandemic. A survey carried out by an international consortium of researchers from Bangladesh and the Netherlands, as part of the project Inclusive Cities through Equitable Access to Urban Mobility, led by Prof Ajay Bailey from Utrecht University, the Netherlands in collaboration with Dr. Shanawez Hossain from BRAC Institute of Governance and Development (BIGD) and Prof. Musleh Uddin Hasan from Bangladesh University of Engineering and Technology (BUET), Dhaka aimed to gauge this very impact of the lockdown on the well-being of the older adults. 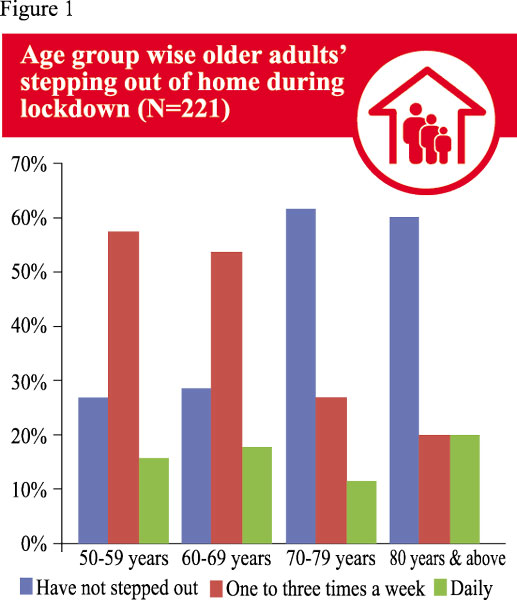 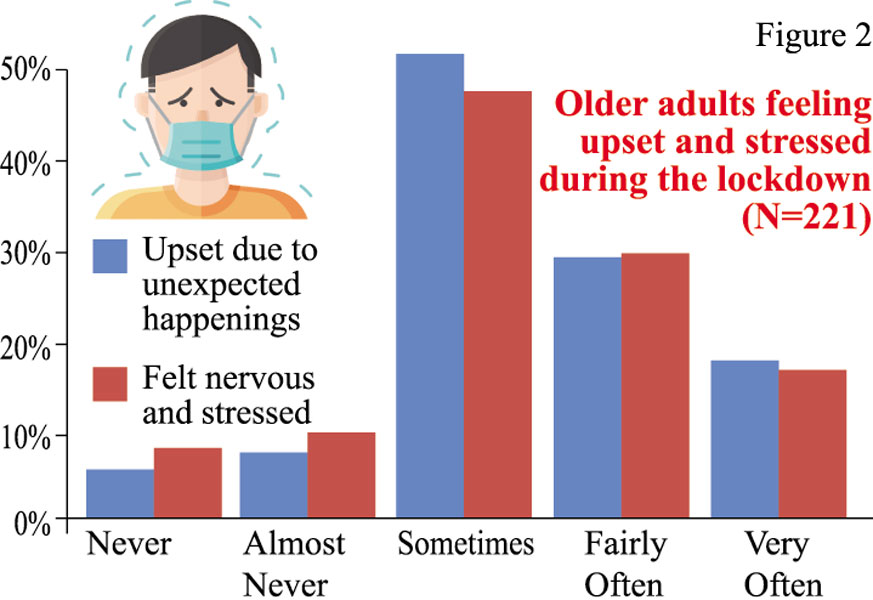 pandemic has forced more restrictions imposed on mobility for older adults than any other age group. A study by Chinese Centre for Disease Control and Prevention has indicated that the mortality of older adults, due to Covid-19, is about 8-10 per cent whereas it is 0.2 per cent among people aged 10-40 years. In such a fear-induced situation, the older adults avoided public transport and preferred either to stay inside or use personal vehicles. The results showed that public transports such as: bus, taxi (Uber, Pathao etc.), car (as passenger), auto

rickshaw, sub-urban railway were the major preferred modes for daily mobility but after lockdown people substantially reduced using such public transport. About 39 per cent older adults in Bangladesh responded that they used to travel in public bus before lockdown but after lockdown only 7.7 per cent people used it. Similarly, there was 64.5 per cent reduction in taxi use in Bangladesh after lockdown. One of the most significant findings is that there was 11.5 per cent rise in walking as a mode of transport for everyday mobility. Older adults perceived that walking is the best mode to maintain social distancing while going out for essential services during the initial stage of lockdown.

Fearing a huge flow of people that can further increase the risk of virus infection, the government has restricted the use of intercity commuting trains also. On the other hand, the use of private vehicles such as: scooter/bike (self-driven) increased in Bangladesh amid the pandemic. Before lockdown about 7.7 per cent older adults in Bangladesh used to travel by scooter/bike (self-driven) but after lockdown its utility increased to 8.1 per cent. However, the older adults viewed that they missed public transport for everyday mobility. More than one-third people responded that they missed public buses for their mobility. Walking, riding rickshaw and auto rickshaw, and taxi (like Uber, Pathao etc.) are the other modes of transport that the older adults missed during the lockdown. About 38 per cent people expressed that they missed walking and rickshaw in their daily mobility.

Though stepping out is risky for the people, still they used to go out for different purposes. The results displayed that about two-thirds of people stepped out to buy food items. Second most important reason of going out of home during lockdown was to buy medicine as they were concerned about their health. Apart from that, older adults also went out to access ATM/bank, doctor's clinic and hospitals. The pandemic has stopped the lives of the older adults and restrained them from meeting friends, relatives and neighbours. Over 56 per cent older adults have not met with the neighbours, many of them have not met with their friends during the lockdown. Apart from that about half of the participants responded that they missed morning/evening walk and visiting religious places during the lockdown. The reason of the low score of meeting friends and neighbours might be maintaining the social distance and avoidance of gathering. This inaccessibility to transport and foregoing social activities have negatively impacted their mental health and wellbeing.

Impacts on psychological well-being: The Covid-19 pandemic has put the lives of many on hold and triggered anxieties, worries and concerns about their overall health and well-being. The associated uncertainty is increasingly testing psychological resilience of the masses. Increased irritability, emotional exhaustion, exacerbation of pre-existing conditions, poor concentration and fatigue may be examples of such mental challenges.

Seven per cent of the respondents continued to 'visit other people's houses' or 'have people over' during the lockdown in Bangladesh, while 93 per cent people adhered to social distancing guidelines and maintained social networks over the telephone. Besides, 62 per cent older adults used Facebook and over 55 per cent older adults used WhatsApp and other social media channels (messenger, Viber etc) to maintain the social relation with the relatives and friends. The social media use has also enabled older adults to be, virtually, in touch with close ones. Over two-thirds of the respondents enjoyed spending time with their family and one-fourth of them played with grandchildren that gave older adults more mental satisfaction in terms of relaxation, feeling fresh and active, and cheerful. Reading books (including religious texts), watching TV and browsing social media all fared comparably high in keeping people entertained during the pandemic. Such entertainments helped them to maintain a high/good quality of life by mitigating stress and depression during the crisis. As a result, almost 59 per cent of the respondents reported high/good quality of life according to the WHO-5 well-being index. Over 42 per cent older adults perceived that more than half of the time they were cheerful and content during the Coronavirus lockdown; whereas 38.5 per cent participants observed that only 'some of the time' they were cheerful and content during the lockdown. Besides, more than 20 per cent older adults felt that 'most of the time' they were calm and relaxed. Simultaneously, over 34 per cent of them responded that they felt calm and relaxed only 'some of the time' during the pandemic lockdown.

In contrast, about one-third of the respondents reported symptoms of depressive disorder (as per PHQ-2 scale for depression). However, almost 45 per cent of the total respondents acknowledged that they would 'sometimes' feel 'nervous and stressed' and 'upset over unexpected situations'. Over one-fourth of the older adults fairly often felt upset because of something that happened unexpectedly during the pandemic. About 15 per cent older adults very often felt nervous and stressed due to forced immobility. In addition, over half of the older adults approved that they had been bothered 'several days' by having little interest or pleasure in doing things and by feeling down and hopeless. About 10 per cent older adults were disinterested in doing things almost every day as they could not concentrate due to stress caused by the pandemic. Moreover, about 59 per cent older adults observed that they had been bothered 'several days' by feeling down, depressed or helpless during the lockdown. More than 11 per cent older adults responded that they were depressed or helpless almost every day and had a poor quality of life due to fear-induced environment and restricted mobility. The restricted mobility has increased the loneliness and social isolation among the older adults and further deteriorated their mental health and wellbeing.

The way forward: The urban transportation landscape is likely to undergo significant changes due to the on-going Covid-19 crisis. Increased risks associated with crowded places combined with social distancing measures in public and shared transport are likely to affect the mobility pattern of the commuters. The lockdown and subsequent inaccessible public transport has increased the vulnerability of marginal groups such as older adults as they are unable to access work places, health care facilities and social interactions. Living in such a fearful atmosphere and limited mobility have also aggravated the psychological well-being of the older adults. As people prefer private transport to shared transport the government and transport authorities should raise awareness and motivate people to use public transport by taking adequate measures that will protect users from virus transmission. Given that cities of Bangladesh are most densely populated in the world, with limited road space they cannot accommodate the private vehicles further. Therefore, the government should stringently implement Covid-19 protocols such as maintaining physical distance, open windows, frequent sanitization of the vehicles, obligatory masks for all passengers, crowd monitoring, and thermal screening to reduce the risk of contagion while reviving the public transport. In line with Johns Hopkins Health Department's guidelines, the older adults should be instructed to maintain the social distance, wash hand frequently and avoid crowded places so that they can protect from infection and remain healthy. Since religious leaders play a vital role in the everyday lives of older adults in Bangladesh, they may persuade them to follow the instructions for maintaining a healthy lifestyle and motivate them for better psychological health.

Besides, the non-government organisations (NGOs) may also play an integral role during the pandemic by supplying food, medicines and other essential services to older adults that would help reduce the feeling of hopelessness and disinterest in doing things. In addition, the government and urban development authorities may increase the green parks where the older adults may visit, by maintaining social distance, which may enhance their mental health and wellbeing. In the current phase of no lockdown visiting green parks would have given older adults a better opportunity for social interactions. The recent development of three parks - Justice Shahabuddin Ahmed Park in Gulshan, Banani Women and Children's Park and the park and playground in Mohammadpur, are the much needed initiatives towards promoting psychological wellbeing. In this restricted mobility, technology can play a vital role by virtually connecting the older adults with close ones. Through social media such as Facebook, WhatsApp, Viber etc. older adults may reduce their social isolation during the pandemic. If devices are not available for social media, telephone calls may also help to reduce loneliness. Most importantly, the family members should take care of the older adults because they are often dependent on family members for maintaining daily routines, and here care includes not only the daily food and financial support but also the emotional attachment which gives satisfaction and thus, good quality of life and wellbeing.

Dr. Shanawez Hossain is the Director of Executive Development Center (EDC) and Head of Capacity Building & Partnership at BRAC Institute of Governance and Development (BIGD)

Professor Dr. Musleh Uddin Hasan is the Head of the Department of Urban and Regional Planning (URP) at BUET