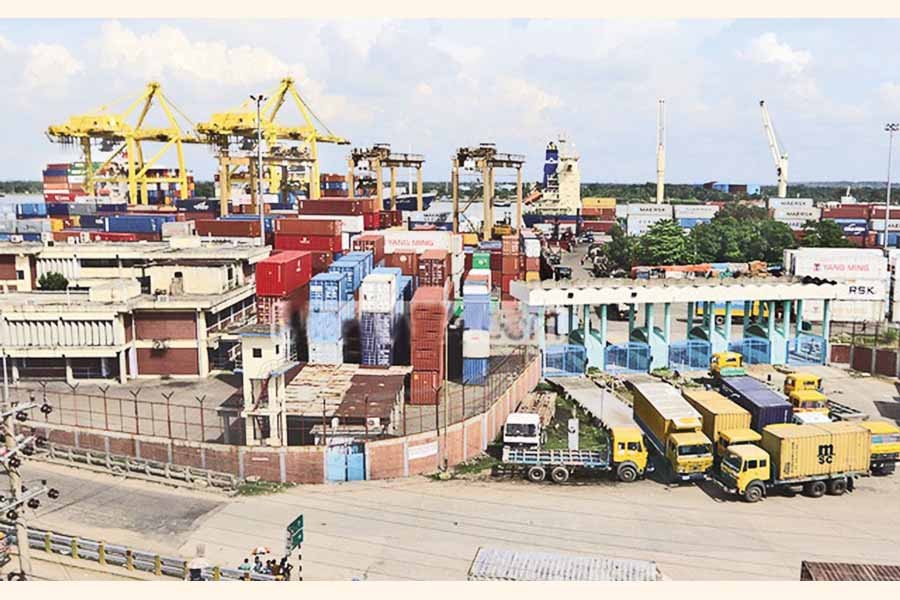 Despite the maritime trade hampered in the world due to the coronavirus outbreak, the Chittagong Port sustained the growth rate of handling cargoes and containers last fiscal.

Besides, the port handled a total of 3,764 ships last fiscal and a total of 2,699 ships in the previous fiscal. The growth of handling ships was 1.75 per cent in the last fiscal year.

Secretary of Chittagong Port Authority (CPA) Md Omar Faruk said, "The handling of containers, bulk cargoes and also ships increased last fiscal. Despite the growth rate being small in the last fiscal year compared to the previous years, the Chittagong Port authority could sustain the growth rate of handling containers, bulk cargoes and ships even amid the coronavirus outbreak."

"Chittagong port, the prime sea port of the country, made its way to the 'three millioner' port list on December 22 last year. As the sea port handled three million containers within a year in 2019, it set the record by entering the list," he added.

Omar Faruk further said, "It is the fact that the port workers, staffs and officials are discharging their duties even ignoring government holidays and defying the risk of coronavirus. The staffs and workers worked hard during the government holidays amid the corona outbreak, raising the growth rate of handling cargoes and containers."

He said, "Under the Agreement on the use of Chittagong and Mongla ports for movement of goods to and from India" the transshipment ship is carrying the goods now. As per SOP of the signed agreement, the first transshipment ship started carrying goods on a trial basis."

He further said, "After start of the transshipment in full swing, the new dimension will be included in our national economy. Chittagong Customs House will take revenue and taxes against the transshipment containers. Besides, Roads and Highway Department will also get revenue for using the roads of Bangladesh to carry the goods by using the roads. Besides, Shipping Agents, C & F Agents, Cargo Transportation Agents will get business and huge employment will be created after start of the transshipment in full swing. As a result, our economy will get benefited."

President of Chittagong Chamber of Commerce and Industry (CCCI) Mahabubul Alam said, "It is very good news for us that we started the trial transshipment and I hope that the regular transshipment will start very soon."

CPA is to cover the all important areas of port including the New-mooring Container Terminal (NCT), Chittagong Container Terminal (CCT), JCB and all jetties with close-circuit cameras. A total of 513 close-circuit cameras have already been set up in the areas while 300 more will be set up soon to cover all important areas of the port to ensure close monitoring.

CPA extended its advisory committee in August last year. Earlier, there were 54 members in the committee. Presently six more members were included in the committee on August 3 last. As a result, the newly reformed committee is a body of 60 members.

CPA destroys five tonnes of risky chemicals from its P-Shade

A total of five tonnes of date-expired and risky chemicals which were stored at P-Shade of the port were destroyed to make the port risk-free in September last. Of the risky chemicals, there were solid chemicals, Hydrogen Peroxide, Bulk-kits, Dithionate, Hydrochloride, Nitro-glu Solution, Caustic soda etc. Those were destroyed as the dates of the chemicals expired and those had been stored at the P-shade since 2010 last.

Deputy Commissioner (Auction) of CCH Farid Al Mamun said, "We destroyed five tonnes of chemicals from the P-Shade of the port as these turned useless."

The port authorities became concerned over safety of the imported hazardous chemicals after the August 4 Beirut Port blast. However, the port does not handle privately-imported explosive items, hazardous and inflammable chemicals. It only handles the goods of Bangladesh Army with safety measures under the existing rules.