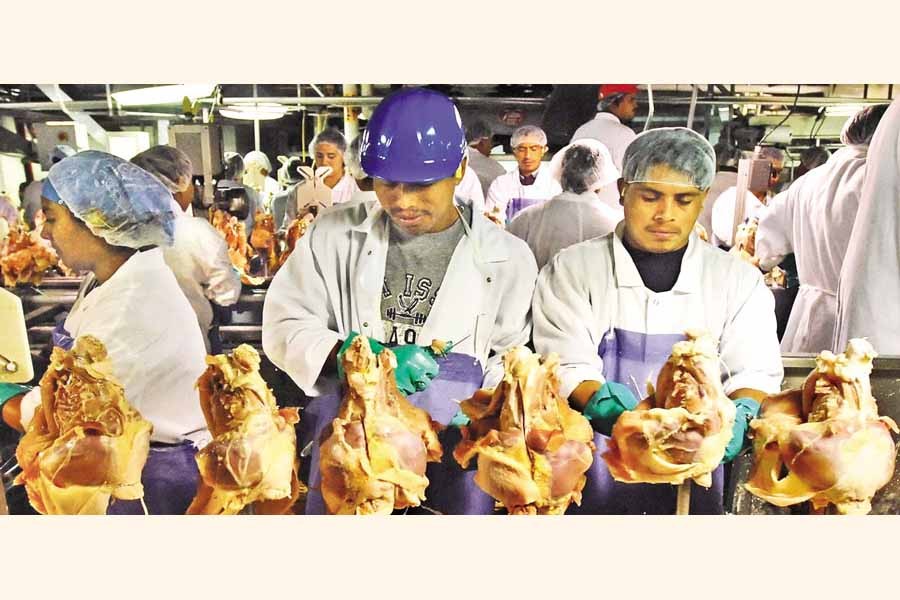 A typical meat processing plant before COVID-19 — The Charlotte Observer

The ongoing coronavirus pandemic has shown how brittle the world economy is. Millions of people have lost their livelihoods, homes, means to education, and luxuries amidst this pandemic.

It is uncertain when the economies will bounce back to their pre-pandemic levels, even after the discovery of a vaccine. The latest World Economic Outlook report by International Monetary Fund (IMF) predicts that some of the lost economic growth may not be recovered anytime near. The USA and Germany may need to wait up to 2022 to reach its 2019 GDP level. Some European countries may need to compensate for a higher timeframe. Britain is expected to reach 2019 level GDP in 2023 and Italy as long as 2025.

The overall output of many places will be considerably lower than the pre-pandemic period. And these are the most developed countries, while the developing and underdeveloped ones are expected to get shaken harder.

The same inhibiting effect can be seen in the case of Spanish flu pandemic in 1920 and similar events. This begs the questions: What could have been possibly done? How can it be possible to prepare for the next epidemic/pandemic? Is it possible to design an economy that is immune to the effect and aftereffect of a pandemic?

The article discusses several ways whichminimise the negative impact of a pandemic similar to coronavirus. It also examines the effectiveness of the solutions that are being implemented today. These discussions should help future policymakers in figuring out what do to during these periods. The article contains a few assumptions but that should not weigh down the importance of designing an economy that actually works when needed the most.

Before the discussion of the design of an economy immune to the effects of epidemics/pandemics, it is essential to know the nature of these events and what they entail.Although vastly different in terms of symptoms, carriers, cause of deaths, and other characteristics, the disease outbreaks have one or two things in common. As simply evident from the earlier pandemics, people are forced to be isolated from society which causes a subsequent decline in the economic activities.

So, how does the result look like? Needless to say, the picture isn't pretty. Due to the ongoing pandemic, the overall world economy is expected to face a setback which will limit the projected progress towards the long-term projected economic position. The IMF's outlook - 'A Long and Difficult Ascent' - predicts that the progress made towards reducing global poverty and inequality will take an opposite turn. Due to restrictions and decline in mobility as reported by Google's Covid-19 Community Mobility report, around 90 million people may experience income downfall and poverty.

Closure of educational institutions will cause a challenge for the countries to deal with this accumulated human capital. Gradually, the countries may experience gradual piling of sovereign debt. As the overall output will deteriorate, the governments will have smaller tax revenues to deal with such piled up obligations. The recession will leave a scar on the potential output of the economy in medium term. The surviving businesses will have to compromise productivity to upgrade workplace safety and allocating resources across sectors will be costly.

If there is an increase in the shock, many firms may go bankrupt or undergo restructuring. Many discouraged employees have to leave the workforce. Many economies will have lower productivity and investment growth in the future.Lessefficiencyincombining information technology with the factors of production will also be a concern.

An economy is run by its people, the people's behavior largely determines the downturn or progress of it. If the behaviours can be guided through a structured economy, the negative impact of pandemics can be greatly minimised. The empirical evidences of the pandemics provide some guidelines for the economies to follow.

Implement Healthcare System: Having a comprehensive healthcare system is one of the most convincing signs of a truly developed country. Only a government can be expected to take care of its citizens selflessly with a social welfare objective during this period. 'A healthcare system' as a tool not only fights pandemics, but also helps minimise the economic impact of such events. This works as an investment which pays off through increasedeconomic activity in the years to come as studied by Jonung and Roeger (2006) on a paper on the macroeconomic effects of a pandemic. The economy is also cushioned against any future economic disaster. Progress in the medical technology and system now will escape all unnecessary economic costs to society later.

Introduce Paid Sick Leave Days: In countries like Bangladesh, the privilege of paid sick leave is uncommon. Yet, its importance amidst a pandemic is undeniable. People are expected toget back to work eventually after a strict lockdown, even at the risk of life. In that period, people really can use some paid sick leave days. Individuals with disease won't have to worry about their income source at the end of the month.

In the absence of paid sick leave, the infected people will be forced to return to the workplace, infecting more people as a result. This will not only lengthen the pandemic but also reduce the size of the employable force. Some may ask, "Can business organisations really afford paid sick leaves when their revenues are declining? Isn't it like burning both ends of a candle?" For that matter, they are suggested to maintain an emergency fund comprised of liquid assets. This may seem unprofitable, but it would keep the organisations intact for a few months even when faced with declining revenues or increasing loss. This will come off as an investment in human capital which will pay off eventually in the long run. James and Sargent studied the economic scenarios of 1918, 1957 and 1968 pandemics in a Canadian study (2006) and found that, the rate of employee absenteeism does not increase substantially, as published by the Economic Analysis and Forecasting Division, Department of Finance, Canada.

Increase Government Spending: In the expenditure approach of calculating GDP, all elements except government expenditure reduce drastically during pandemics. The government, with the appropriate plan, can move the economy forward in terms of GDP by increasing its expenditure in these scenarios. Building hospitals, investing in vaccine research, providing stimulus checks - there are numerous possible activities that can keep the money moving, reduce unemployment, and get the country (perhaps the world, through the discovery of vaccine) out of this uneasy situation. According to a study by Allianz, people tend to save less when the government spends more on a social cause; this is because they expect the government to support them during challenging times. That means government expenditure can indirectly increase consumption and investment, thus contributing to the economy.

The term 'appropriate plan' is mentioned to remind that there are many ways to spend taxpayers' money. An appropriate plan is needed to ensure that we build hospitals for the sick during pandemics and playgrounds for children after pandemics, not the other way around.

Promote Remote Working: One of the new things observed during this pandemic is that it is possible to do certain jobs by staying at home. In a remote working-based economy, there is less need for a city, less transportation pollution and less wastage of resources (including time).Most importantly, this helps stop the spread of diseases and allows the health officials to contain and monitor infected units.

Certainly, not all jobs can be done at home. Besides, there is also a question of productivity. But the effectiveness and importance of remote working cannot be denied. Preparing business models based on remote working (where possible) would help businesses tackle this difficult situation in a better manner. Many businesses are adapting to the current situation by introducing remote working. Many have adopted information technology (IT) to keep their operation going during the pandemic. Enabling work from home, online sales, contactless delivery etc. facilitated social distancing and ensured resilience in overall employment.

According to a study based on the US Census Bureau and US Bureau of Labor Statistics, adopting higher levels of IT during the pandemic (lockdown) period protected the local economies against any drastic pitfall. The areas incorporating higher levels of IT for their businesses ensured mobility and a drop in unemployment. However, this cushion does not work for people or communities with lower education levels or less access to IT. Thus, promoting IT to a higher extent may protect the labour markets from taking a drastic hit. But, it will also promote far extended inequality among people with high and low levels of education and access to information technology.

It is outright impossible to completely nullify the negative impact of a pandemic on an economy. Somesectors are bound to suffer, go bankrupt and lose everything. The measures mentioned above, in no way, will work 100 per cent. Take remote working for example. This idea has no meaning whatsoever in the meat industry. The whole process of turning live animals into food packages requires close interaction and hands-on experience of the workers.This is why several meat processing plants across the USA and UK were shut down when substantial parts of their workforces tested corona positive. This led to a meat crisis and a dramatic price hike in the price of meat. There was no lack of supply of meat; there was just no one to process them. This led to a situation where the farmers were forced to euthanise their livestock because of a lack of demand, but meat prices continued rising because of a lack of supply.

The point is: there is no way to reduce the negative economic impact of pandemics completely. The sectors that deal with essential items will prosper, others will suffer. Amazon, which proved to be essential when you have to stay at home, hit a market value of 1.0 trillion dollars while Brooks Brothers, a high-end retailer frequented by the presidents of the USA quite often, filed for bankruptcy during this pandemic.

Likewise, some sectors will lose in one stage and then gain in the next stage. According to CNN, Fine jewelry sales were up nearly 10 per cent to $5.25 billion in August from the same month last year despite having a fall in sales at the initial stage of the pandemic.

Let's conclude by quoting Elizabeth Edwards: "Resilience is accepting your new reality, even if it's less good than the one you had before. You can fight it, you can do nothing but scream about what you've lost, or you can accept that and try to put together something that's good."

Saif Mahmud and Tahmid Islam are completing MBA at the Department of Finance, the University of Dhaka.