Financial technology, aka fintech, is getting popular in Bangladesh, so is digital banking. The launch of mobile financial services has brought about revolution towards digital banking in the country. Besides, the e-payment system, internet banking, agent banking, paperless banking, use of debit and credit cards have helped foster digitalisation in the banking system.

The uses of mobile phone and internet have been a blessing for the densely-population nation. The number of mobile phone users is over 167 million while internet users are more than 111 million (until September 2020) in a country of 170 million. The internet use in the country over a last three years has jumped by 40 per cent from 79.79 million in October 2017. Among the 111.13 million subscribers, a total of 102.48 million mobile phone users use the internet, according to the Bangladesh Telecommunication Regulatory Commission (BTRC).

As the first step towards the digital banking, the Bangladesh Bank (BB) in 2010 launched the Bangladesh Automated Cheque Processing Systems (BACPS) in an attempt to simplify the clearing facility. It uses the Cheque Imaging and Truncation (CIT) technology for electronic presentment and payment of paper-based instruments (i.e. cheque, pay order, dividend, refund warrants, etc). 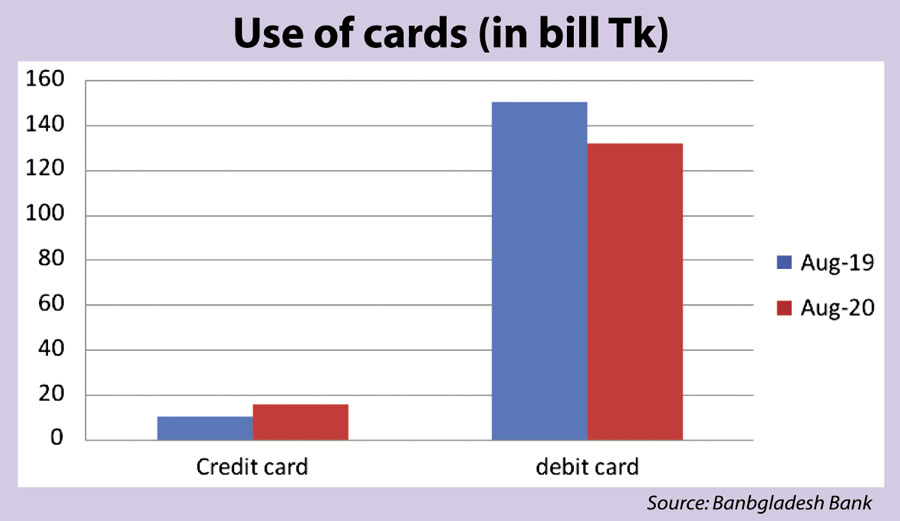 The digital banking got a further boost when Bangladesh Electronic Funds Transfer Network (BEFTN) was introduced in February 2011. This is the country's first paperless electronic inter-bank funds transfer system. It has automated the traditional cheque clearing system.

Another feather was added to the digital banking in 2012 when the National Payment Switch Bangladesh (NPSB) was launched. It is used for 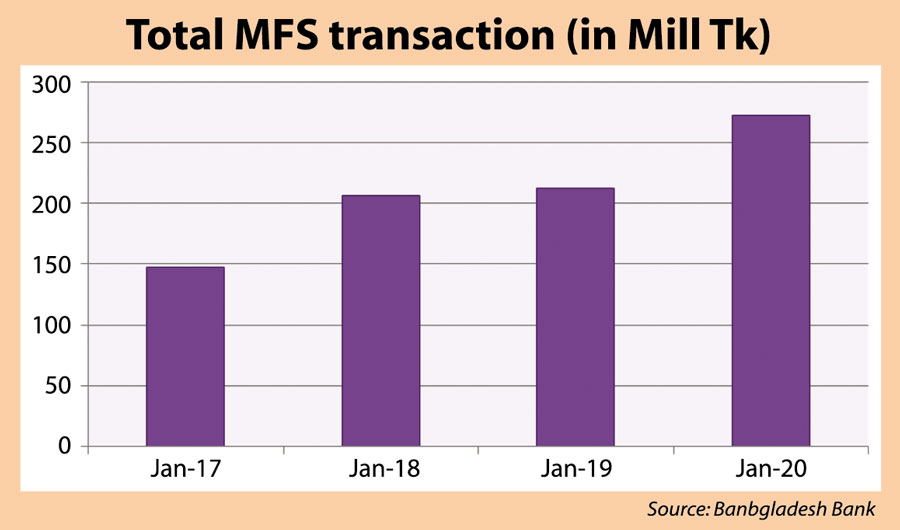 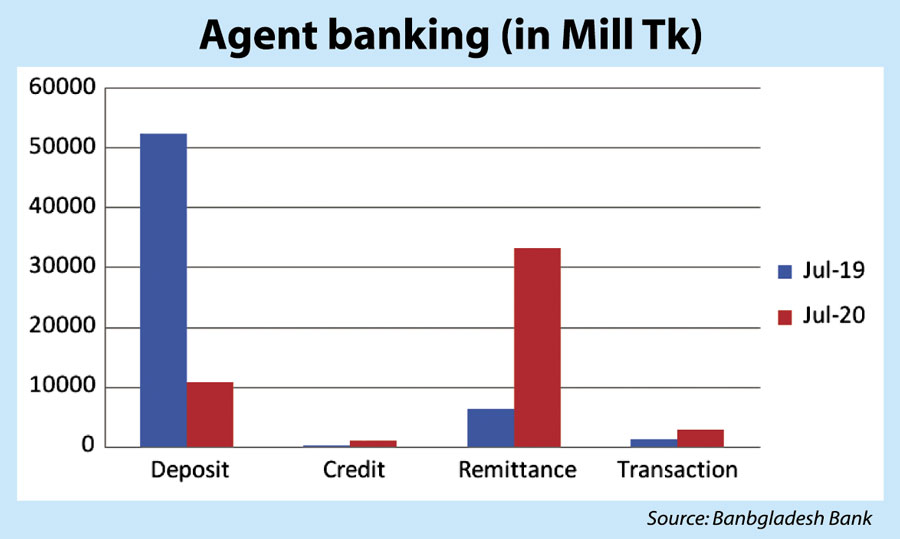 The use of credit cards in commercial banks and financial institutions (FIs) in Bangladesh has also risen sharply, as their month-on-month transactions boosted by 50 per cent within a year. The volume of their transactions increased to Tk 15.52 billion in this August, from that of Tk 10.35 billion in the same month a year back in 2019, the BB statistics showed.

The internet banking has also become popular in the country as its transaction growth is swelling month-on-month at a higher rate. This remote banking is now an important feature of the financial services sector where any customers can conduct their transaction from anywhere in the world. Now 25 commercial banks have launched the fund transfer through their internet banking for their customers, who can transact money in a click on their cellular phones.

The month-on-month fund transfer through internet banking in September shot up by 36 per cent to Tk 5.42 billion in September last from Tk 3.98 billion a month ago, the central bank data showed.

If we analyse the Bangladesh Bank's data on the transaction through POS and ATM booths, then we will also notice the extent to which the digital banking has grown in Bangladesh. The customers have transacted a total of Tk 17.25 billion worth of funds in September 2020 from Tk 16.21 billion a month ago. Similarly, the POS transaction has also showed a higher month-on-month growth.

The introduction of the Real Time Gross Settlement System (RTGS) since 2015 has expedited the internet banking a lot in the country. It opened up a new horizon for commercial banks and for the corporate sector to settle their payments instantly, at the same time individual customers are also availing this service for settling their large transactions.

The central bank has introduced efficient off-branch Mobile Financial Services (MFS) in 2011 as the country acquired an omnipresent mobile phone network. Within seven years, this exponentially growing bank-led model of MFS has become one of the largest MFS markets in the world.

According to the BB, some 15 commercial banks have so far included the MFS services to their operations, which are now a popular money transaction system in Bangladesh. The number of MFS customers had reached nearly 95 million in the country until September 2020. The customers made a transaction worth Tk 491.21 billion in September, posting an 18.6 per cent growth. The number of daily transactions through the MFS in Bangladesh is nearly 9.1 million, the BB data showed.

The agent banking is also a good instrument for Bangladesh's digital banking system. The rapid pace of agent banking is changing the rural economic landscape as millions of unbanked people have been integrated into the formal financial services.

Today, information and communication technology has become part and parcel of the banking sector. The modernisation of ICT has set the stage for extraordinary improvement in banking procedures throughout the world. For instance, the development of worldwide networks has considerably decreased the cost of global funds transfer.

Banks that are offering ICT-related services such as online banking, electronic payments can deliver high quality customer services at a rapid pace. Technology has already enabled most of the banks in Bangladesh to introduce innovative products such as ATM/POST facility, mobile/Tele banking, web banking, 'Anytime' and 'Anywhere' banking, etc. These technology-driven solutions have made life easier.

The digital banking has helped the country's commercial banks and financial institutions to improve efficiency, productivity and profitability. Still, the state-owned and nationalised banks are behind the curve compared with their private peers as far as efficiency and profitability are concerned. Furthermore, the banking sector needs a robust internet security for customers' protection. For this reason, sound technical infrastructure and efficiency of the employees are needed. Indeed, IT security and governance must be ensured for the next generation online banking in Bangladesh.

The writer is Special Correspondent of The Financial Express. [email protected]